In issue #13, we discover (among other things) that the original Manhunter's dog was actually a robot.

A robot dog. Love dogs; love robots; love robot dogs. Somebody really needs to give Cliff Steele a robot dog named Robby; that's what the Chief needs to work on in his lab.

Okay, now the whole "robot dog" thing was made up in some previous Manhunter run, so no points for that. And the only time we actually see this robot dog is in flashback and when it gets "killed" by being thrown through a window. Negative points for Injury to the Dog motif (thought, in fairness, it's just a robot).

BUT. There's an off-line robot dog. And a tech-master named Dylan hanging around. I am convinced, as an article of faith, that if this series is allowed to continue, Dylan will repair the robot dog and it will become Kate Spencer's sidekick.

I like Batman. JLA's fun. But face it: there's no chance books like that might feature a robot dog sidekick. In Manhunter, it's not only possible, but if it happened you wouldn't bat an eyelash. And that is one of the reasons I read Manhunter. 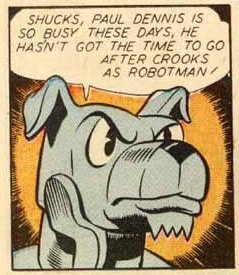 This is Robby, DC's original robot dog.
Posted by Scipio at 9:00 PM

Lord, I have the comic that introduced the robot dog. It was SECRET ORIGINS 22, a special tie-in with MILLENIUM, that crossover that made me hate crossovers, Steve Engelehart and a cruel God who allowed such sulphorous dreck to exist.

In order to pull everything into the Manhunter plot to dominate Earth, it was revealed that the robot Manhunters had recruited the original 40's hero of the same name because obviously there could be no other explaination for him to take such an outlandish name as "Manhunter".
Oh - and they gave him a robot dog. And two panels later shouted "No man escapes the Manhunters!" Which is what they did in spite of the fact that all sorts of men escaped them all the time.

MILLENIUM was a pathogen - a retcon-virus - that infected everything in the DC universe. Lana Lang couldn't escape its clutches. She's forever going to be Superman's childhood girlfriend who was brainwashed from infancy to be a sleeper agent for a bunch of 3 billion year-old robots.

MILLENIUM sucked so much it made robot dogs uncool.

Will speaks only truth concerning Milennium, particularly as regards Lana/the entire population of Smallville/giant spaceships/three-billion-year-old robots who shout "No Man Escapes The Manhunters!" every two panels.

I, for one, will be extremely surprised if Thor is resurrected. Besides, I thought the dog got smashed up during Milennium, and thus the current Thor was probably a real dog (?).

I, for one, will be extremely surprised if Thor is resurrected.

You've not seen the hints in the Civil War miniseries then? :)

Yes, the "Lana Lang, Manhunter" thing is the stuff of legend.

Englehart. That explains a great many things.

Isn't that the cool thing about comics: a creator could be reading one of the same back issues many of us have lying around, and think to himself, "You know, I could make this robot dog thing work."

The logical conclusion would be, if you want a certain character brought back, you should "seed" the right creators with the necessary old comics. Where you would get that many comics with Dr. Domino, I don't know.

BTW, the reason I'm not reading the new Manhunter, is that I already have the last issues of Mark Shaw, Chase Lawler, and Paul Kirk. Circumstantial evidence maybe, but for Kate's sake I'm not risking it...

In defense of the dreadful "Lana Lang:Manhunter" concept, I thought it was a necessary evil, as having the entire population of Smallville brainwashed by Evil Space Androids so that they would be psychologically incapable of noticing that "popular jock Clark Kent" that grew up there bore far more resemblance to Superman than he did to "mild-mannered reporter Clark Kent" was one of the few things that would work to make Clark's secret identity even halfway secret. I'm still curious as to how the TV show "Smallville" will handle that matter when it finally concludes, but I'm guessing that they'll be counting on the "meteor rocks" most common attribute: that everyone exposed to them becomes dumb as a rock themselves...sigh

The GI Robot had a robot dog.

Better still, the robot dog had a robot cat. The robot cat was hidden inside the robot dog, and would spring out from a trapdoor in the dog's back to attack startled enemies.

For this, among many other reasons, the spirit of Robert Kanigher drinks mead with the fallen Comic Book Greats in Four-Color Valhalla.

Back on topic, I just started reading Manhunter. So far, I'm diggin' it.

"Where you would get that many comics with Dr. Domino, I don't know."

So one way that you could get me to buy Manhunter is if you actually stocked the books in your store instead of running out of them all the time! Curse you!

Been done. The Golden-Age Robotman had a robot dog named, what else, Robby. As far as I know none of the stories with Robby have been reprinted, though.

Hm, yes, Dale, that's what I was refering to. I loved Robby (and some of his stories were reprinted in the 1970s)

That's why I think the new Robotman should have one too.

I think the world is ready for a Golden-Age Robotman Archives!

Somebody really needs to give Cliff Steele a robot dog named Robby; [b]that's[/b] what the Chief needs to work on in his lab.

Knowing the Chief though, he might make Cliff's robot dog dependent on special robo-doggy treats only HE knows how to make.

I just looked and found a Robotman story with Robotdog in the Greatest Golden-Age Stories Ever Told.

I also found a very disturbing typo on the contents page of that collection...