Establishing a New Power Base 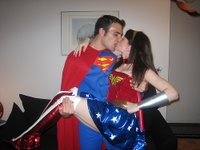 I know a lot of you don't play Heroclix and so don't care much about it, but, well...

I do. A better way to spend an evening "playing" superheroes with your friends I've never found. I mean, without, you know, renting costumes. And the local costume shoppe still has that restraining order on me.

Anyway, I enjoy the game and think it does an amazing job of representing what characters can do and capturing that 'comic book feel". But it could be improved, so every once in a while I'm going to throw out an idea for change to Heroclix that would make me happy. Soon, all Heroclix players in the world will flock to these posts, rise up to have my word declared law, and the company will give me 51% of the stock and I'll personally get to decide on all dials and sculpts. Hey, it could happen.

My first idea is about Heroclix's Team Ability system. It's a bit of a hodgepodge now and deserves to be better thought out; some TAs are so complicated they are difficult to explain and even harder to use. But the real problem is that the current system leads to "un-comic booky" situations, silly annoyances like: 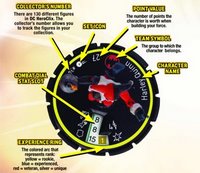 I think it would be better to have more such abilities, have them be simpler, and give them an overall structure that would them easier to remember. A revised TA system would also be better able to represent what the comic book characters should be able to do (a task that the overburdened color-coded power dial could use some help with).

Part of the problem is that characteristics of very different types are being represented under the same system. Those types are:

What are now called TAs are marked on the base of a figure and, as opposed to the powers that come and go on its dial, are permanent. Let's call them "Base Abilities" instead.

Base Abilities should come in four types (the ones listed above) and should be arranged along major characters and teams. [You can see the kernels of this in the current system, but you can tell it was designed by "people who designed our previous D&D games" rather than "people who also read comics".]

Base Abilities in most of the three types should exist for major groups and iconic characters: Superman, Batman, Wonder Woman, Flash, Aquaman, Green Lantern, the JLA, the JSA, the LSH, the TT, the Doom Patrol, a few others. Each figure should be able to have more than one Base Ability; that way, an Experienced Superman could have both the Superman TA and the JLA TA.

Seem like too much? Not necessarily; not if you keep the Base Abilities simple, and give them a pattern.

The Team Ability for "families" should convey a single regular combat power. For example, the existing Batman TA conveys Stealth. No one has any trouble remember that! That should be for others as well, something like this:


Even if you've never played the game, you can remember those pretty easily, huh?

Group affiliations should convey abilities that work only in combination with members of that same group. Picture something like...

That way, you are motivated to play those figures together as a team, and their team affiliation has no effect on other figures.
Base Abilities for Enemies should be very simple and targeted toward their usual opponents.

As for Base Abilities for Allies, those should increase the Defense Values of the Allies when their "main figure" is on the board. For example, Lois, Jimmy, Perry, et al, should have a Superman Ally abilities that gives them, say, Deflection, as long as a Superman TA figure is on the board. They should be used mostly for the Bystander tokens ... but I'll be talking more about those in a later installment!
Posted by Scipio at 4:31 AM

I don't play Heroclix, but I do enjoy reading your thoughts on it. I think you hit upon a common problem with collectable games, though: they really don't think far enough ahead to make logical decisions on gameplay mechanics.

Speaking on which (and I probably should just read the rules), is Heroclix a rule heavy game? How long does it take to play a typical game?

I agree pretty much all down the line.

But I'd make it simpler still.

All Team Abilities would do the SAME thing. That is, there'd be a set of intrinsic advantages that would be common to all members of all teams. (Sharing attack values, and free moves or somesuch.)

And SOME teams would have added powers on top of the powers automatically granted by a team ability.

As a sidenote: I have a major problem with the Batman team. Batman's shtick is intimidation. For that to work, he needs to be SEEN. Although a few quick changes to stealth could take care 'o that.

"adjacent DPers are immune to Perplex or its effects on others."

That just made my day

The basic mechanics are simple:

move or attack
attack when adjacent or from a distance
attack value of attacker versus defense value of target.

There are many thing (powers, team abilities, feat cards) that modify, cancel, or overrule the regular game mechanics. Most are fairly simple and knowing the characters helps understand them.

For examle, under the basic mechanics, a figure must either move or attack, but not both. But a figure (such as the Flash) with "Superspeed" on its dial can move adjacent to an opponent, attempt an attack, then move away. When the "powers" work like that, it's pretty intuitive.

But there's a lot of factors modifying the basic mechanics, and sometimes it can be a tad to confusing as to how they all integrate. But if you focus on playing the game as you would read a comic book rather than trying to maximize your killing power through complicated combinations of powers, the simpler and more enjoyable it seems.

As for time, that depends mostly on whether the players rush to battle or play more cautiously. If we shut up about comics and the dog leaves me alone, it takes about half as much time as normal.

"adjacent DPers are immune to Perplex or its effects on others."

That just made my day

Hey; that one's a no-brainer, huh?

All Team Abilities would do the SAME thing. That is, there'd be a set of intrinsic advantages that would be common to all members of all teams. (Sharing attack values, and free moves or somesuch.)

And SOME teams would have added powers on top of the powers automatically granted by a team ability.

OH YEAH! I consider that a friendly amendment! Provide that only aplies to real teams, not groupings like "Batman Enemies".

I have a major problem with the Batman team. Batman's shtick is intimidation. For that to work, he needs to be SEEN. Although a few quick changes to stealth could take care 'o that.

Easy fix: Stealth when figure is in hindering terrain, KC TA when not.

Not Heroclix related, but Superman's hot!

Too bad he's making out with a girl in that picture...

I want to go ON RECORD as saying I ONLY play Heroclix at Scipio Garling's house.

I'd be quite disturbed if he was making out with anything else.

Devon, can take that to mean that you're the Superman in that picture and you're saying you won't come to anyone else's house and do that?

HA! My wig fools EVERYONE.

Anyway, I always thought that the biggest hang-up with the TA mechanics is that they focused too much on assuming people would want to build teams of various, often unafiliated characters (like John Stewart, Captain Boomerang, Wildfire, a Checkmate Medic and an Alfred POG, for instance), and ignoring the fact that a lot of people would want to build recognizable teams, like the JLA, the Titans, the Doom Patrol, the Secret Society of Super-Villains or whatever. Kind of poor planning, I think.

A SSSV team would be awesome, by the way. Have they made a Funky Flashman POG yet?

Heh, no Flashman yet.

Sadly, a lot of people DO make mostly such teams, using people they're interested more in optimizing their team's manipulation of game mechanics rather than watching a typical comic book battle unfold.

And, as you note, the current TA system makes those two more mutually exclusive than they need to be.

It really bugs me that the GL is completely useless unless you have at least half your team without flying. In fact, having more than one GL character on a team is a waste of points.

My only disagreement is the suggestion for the Green Lantern team ability. Wizkids let the name of the power "Willpower" cloud their judgment.

It's true that Green Lanterns have willpower in abundance. But that's because it is what fuels their rings to a large extent. The willpower as it relates to GLs is not the willpower of the HC game. The HC willpower is actually better named "Quick Recovery" or "Endurance," because it allows a character to squeeze two non-push actions in three turns instead of four.

I would suggest that the Green Lantern team ability should be BARRIER (which functions exactly like the regular power). So long as a GL is conscious, he/she/it would be able to throw up some kind of construct. Or perhaps it should be INCAPACITATE, because GLs can always use a ring construct to wrap around a foe. I'd even go for TELEKINESIS.

One thing is certain, NAAT has rendered the current GL TA as a waste of points.