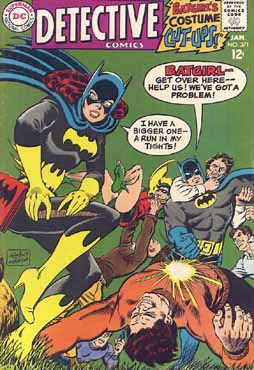 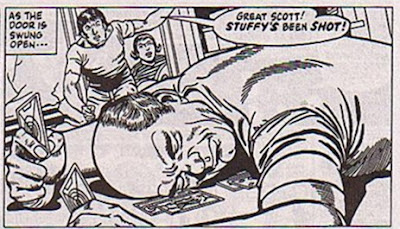 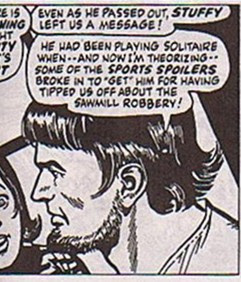 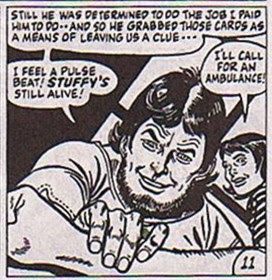 It must be comforting for the citizens of Gotham to know that Batman is more interesting in chasing people who rob from sawmill factories than in saving lives.
Posted by Scipio at 7:41 AM

Appearently, Bat-First-Aid is so awesome that Bats can detect a pulse from the side of an arm where, like.... there is no pulse.

And all these years I thought "Hysteron Proteron" was the member of the Green Lantern Corps who looked like a glass doorknob.

The HeroClix world now cries out for a Beatnik Batman, or as I prefer to think of him "Beatman" figure. Perhaps a custom job is in order.

It must be comforting for the citizens of Gotham to know that Batman is more interesting in chasing people who rob from sawmill factories than in saving lives.

Five year-old Bruce Wayne saw his sawmill factory robbed before his very eyes. From that day forward he dedicated his life to making sure no one else would suffer that same fate.

Three years later when his parents were killed, Bruce found a better alibi for dressing up like a bat and punching people.

I think you're on to something.

You need a weekly feature consisting of pictures of you passed out and holding Heroclix figures in a manner that requires the reader to decipher the day's message.

Hmmm....too bad they don't make Heroclix of Jason Bard and Howard the Duck. The message would be George W. Bush. (Get it?)

"Dick--in his hands!"
Reading that was amusing, but then several hours later while eating dinner, it popped into my head and was suddenly the funniest thing ever. Laughing and eating is not easy.

And I too, concurr that comic creators mirror real-world fashions 5 years later. Check out Marvel, where the 70s lasted til 1987!

Sawmill...factory? That would be a factory that makes sawmills, then?

I wouldn't have thought there'd be enough demand to keep a place like that in operation, much less to make it profitable as a target for armed robbery.