Yesterday was my birthday, which this year happened to fall on Vin Diesel's Birthday (Observed) on the Absorbascon Calendar. Our schedules didn't allow us to celebrate it together this year, so I spent a very quiet day walking the dog, getting a haircut, tidying up the house, and hanging my Patrick Gleeson Aquaman art. It was utterly delightful.

I had to admit there's a gift I want that I haven't gotten:

No, seriously. Not real-life thugs, but the new "Thug" Heroclix token in the recently released Marvel Expansion Set "Avengers" (AvB008). 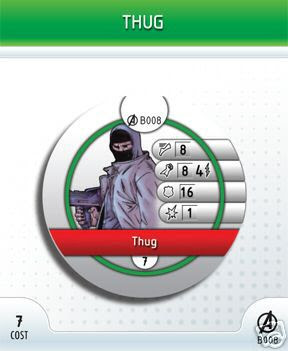 Why do I want Thugs? Because they are exactly what "bystander tokens" should be used for, and Wizkids has finally figured that out!

Bystander tokens were introduced in the Heroclix, oh, quite a few sets ago. At first, they were exactly what the name implied: bystanders. They were one-click generics: the Scientist, the Security Guard, the Paper Boy, the Skipper, the Millionaire and His Wife, and the Rest. There were no special rules for them, however, so they quickly became "meat shields" (figures you used to keep your valuable figures from being targeted). I have always found that unpleasant and inappropriate; I play Heroclix to replicate the feel of comic book battles, not to have scores of paperboys and deli workers running interference for Doomsday.

The scenes became even more ridiculous when tokens became the way of representing heroes' supporting cast members. Really, nothing spoils the "comic book feel" of a game better than watching Ma & Pa Kent tackle Batman so that the Joker can throw a grenade at him or "hearing" Superman say, "I'll carry baby Lian Harper in front of me as a shield, so that when Luthor attacks, it will kill the child instead of mussing my hair!"

What you (well, I, at least) want is tokens for generic bad guys, the guys whose job really is to serve as "meat shields" for the villains, to tackle Batman while the Joker readies his grenade. Ya know: goons.

There've been goons in Heroclix before. The first two sets gave us four such figures (Criminal, Thug, Henchman, Lackey). Problem was, as figures, they each had at least 3 to 5 clicks of life, so you paid in points for excess clicks that weren't useful at all. A related problem -- their stats had to be really crappy to keep the point cost down -- made them an even worse value. And, since there are only so many figures in each set, players didn't like valuable slots to be taken up by crappy no-names. Then, when "bystander tokens" came along, they were superseded.

The advent of the new Thug token signals the solution: tokens designed to be used by villains as cannon fodder. But my problem is...

I don't have any. Nor do I have any efficient way of getting any.

THAT is what I want for my birthday: Thug tokens. Lots and lots of Thug tokens. Please! If you know of anyone who has extra Thug tokens, I would LOVE to have them. I'll even pay the postage! I just want to surround my villains -- particularly my Batman Enemies -- with Thugs.

Even if I don't deserve them, the Batman Enemies do.
Posted by Scipio at 7:13 AM

Scipio, I had no idea it was your birthday. Sorry I missed it, my friend! Many happy returns of the day!

Y'know, if you took away the "t" in "thug", I bet you'd have the present Scipio really wanted for his (observed) birthday (as much as he may he want to deny it).

Unfortunately I can give neither, so I must limit myself to a sincere congratulations to one of my favourite bloggers for once again surviving a whole rotation 'round our wonderful star.

Your blog is one of the highlights of my day, so really, it's more a matter of you providing a gift to the rest of us. So have a bitchin' year and keep up the good work!

Ummm...I don't know what a Thug token is, but if I had one, it would be yours! Happy Birthday.

Happy Birthday! I didn't even know there were thug tokens in this set (so far, all I've pulled were Jimmy Woo and Jarvis. Lots and lots of Jarvis).

Well, happy birthday! As other people said, The Absorbascon is a daily must-read.

Happy Birthday, which also happens to be my birthday. I was born on July 20th also, so maybe it is just a good day for comic book lovers to be born.

Doesn't anyone buy Marvel Heroclix in DC???
Big Monkey Comics still has some Avengers boosters left, and some may contain Thugs!
Scipio, I'll definitely get my hands on some Thugs for you!

You DESERVE to have Thugs!