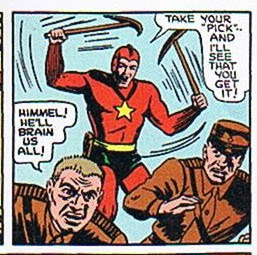 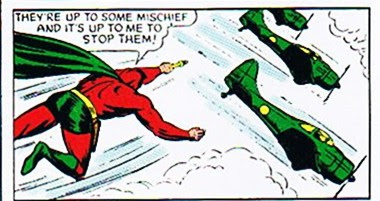 Shut your trap, you stupid bullethead;
it's a Starman-y word.
Posted by Scipio at 8:05 AM

Bulleteer doesn't recognize that "oomphy" is the all-purpose adjective of the Oompa-Loompas, much the same way that "Smurfy" is used by other dimuative characters.

He doesn't have the travel experience that Starman does, so he hasn't learned to appreciate multicultural sayings yet.

Well...I was rather fond of the "mischief" one, but I must admit that "oomphy" does have a certain ring to it.

If Big Monkey put that on the back of a t-shirt, it would sell a quadzillion copies.

Kinda sounds like the title of a Scissor Sisters album.

I, for one, think "oomphy" is both cromulent and scrumtrulescent. I heartily endorse its widespread usage!

Eh, that's not Bulleteer. He was Fawcett. This guy's obviously a Metal drummer (check the 'stache and hair) who obviously decided to dress as a giant red 'marital aid.'

Scipio, BLESS YOU for all your Starman love!

I'd rather go with what the Nazis said: "Himmel! He'll brain us all!" That's a catch phrase you can hang your hat on.

Scipio, I like oomphy as much as the next guy (so to speak), but can't you at least give The Red Bee a chance? For me, a complete stranger, living alone in a deserted mansion on the outskirts of some unnamed city?

The true test is to replace other great signoffs with the chosen one.

Bette Davis: "Fasten your seatbelts; it's going to be an oomphy ride!"

We have a winner!