By now, most people are aware of the phantasmagoraphobical horror that is Central City and its insane effects. But most people aren't aware that Central City is large enough that it developed sentience. Stuff like that happens in comics; remember the Construct?

Anyway, like most sentient beings, it really doesn't care about anything other than itself, and so usually is pretty quiet. I mean, who's it going to talk to... Keystone? I can't imagine Keystone is much of a conversationalist; it probably just talks about NASCAR and American Idol.

Occasionally, though, if the situation is sufficiently dire, Central City will talk out loud to itself about its concerns (but unless you're Jack Hawksmoor, you're not going to overhear it).

Such is the case in this example, where Central City actually managed to compose a self-concerned haiku entitled "There It Is": 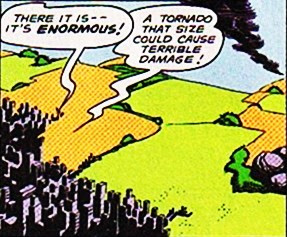 "It's enormous! A
tornado that size could cause
terrible damage!"
How big does something have to be for Central City to consider it enormous? I don't want to think about it.

Do you possess enough sentience to compose a haiku about Central City or the danger it faces?
Posted by Scipio at 6:51 PM

in central city
we love our scarlet speedster
uh oh! a crisis!

Is it wrong that I want to move to Central City one day?

If you move into the abyss long enough, the abyss moves into you.

That gets my vote for best portmanteau of the year. If "ginormous" can get into Webster's, this should.

A giant twister!
Run for your lives! Oh wait, it's
Just Flash's backwash.


All Central City
Cowers in terror at the
Vague smudge in the sky!

Hey Scipio, Just wanted to thank you for the blog. I gave up on DC years ago as I thought the characters and stories were stagnant and "Old-fashioned". But I've been reading your blog for a few weeks and I have to say you've changed my mind. If a fictional universe can inspire as much of a sense of joy and fun as DC has for you, then it must have something going for it. SO thanks to your blog I am going to reinvest in the DC universe. As a matter of fact, because of your hilarious views on Hal Jordan I have purchased and am reading the SHowcase Presents: Green Lantern Adventures.I like it! SO thnak for bringing me back to DC and back to comics in general.( I gave up on MArvel in the 90's. I still taste copper when I think of the Spider Clone saga.) Keep up the good work and "(Whatever the DC equivalent of "Excelsior" is. Maybe you could hold a contest?)"

Storm at city's edge!
Will hit business district
By next Thanksgiving

Quickly! Everyone
Into the town's storm shelter
i.e. "Blue Valley"

Weeks to cross the street!
It may be a twister, Em,
but it won't hurt us.

Haiku may be writ
ad infinitum, you see,
as the storm's too far.

Tornado that size,
compared to my guest bathroom's
barely worth looking.

We're still doing this,
composing storm verse. Wait.
Why is Wally back?

You (and Jeremy's haiku) made my day.

Whatever the DC equivalent of "Excelsior" is. Maybe you could hold a contest>

Thank you for your article, quite effective information.
metal buildings