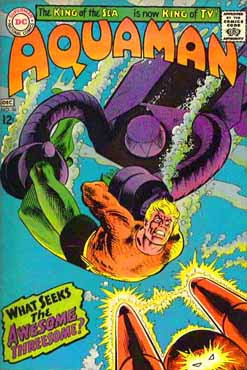 e of those movies I keep locked in the den. No.

Now, two appearances may not seem like enough to warrant clixification, even custom-clixification. But remember, this is Aquaman we're talking about...

Remember, a villain is automatically an "old foe" of Aquaman the very first time he fights them; just ask Cutlass Charlie, Sea Thief, and Shark Norton. That's because, as previously discussed, almost no one ever fights Aquaman twice. The few who do automatically become Top Aquaman Villains (along with Black Manta, Ocean Master, Pomoxis, the Human Flying Fish, and the CW Network).

Before we get to The Glory That Is The Torpedo, let's pick up our copies of Aquaman 36 (DEC '67) and take a look at the other two people--

I assume, by the way, that that's pronounced "Magnetto" as in "rhymes with Armaghetto". I mean, how else would you say it: "Magneeto"? Jeez, how stupid would that sound?

As far anyone knows, Magnet(t)o and Claw are robots. Since neither of them has ever gotten any speaking lines (let alone something like, "You know, it's kind of hot in this suit!"), I assume they are robots. Judge for yourself: 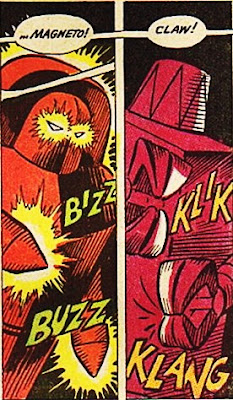 "Bizz buzz"? "Klik klang"? Okay, you just know these two were inseparable at Robot School. I can picture them now, dipping VICI's pigtails in the grease well, then blaming it on some poor sap, like Tin or Lead, until that little brown-noser, Twiki, ratted on them.

Magneto and Claw are your basic brainless bullies, but Torpedo... well! He's something else.

What exactly he is, I don't know; it's not certain whether he's a robot or not. He's described once or twice as Torpedo-Man. Man or not, the first time I saw this guy it was love at first sight...

Just something about his look I find ... irresistible.


Sometimes, when a guy as attractive as the Torpedo starts talking, it ruins everything. But Torpedo is even more eloquent than he is attractive!

Yeah, that's how I felt about Peter David's run, too.

Gee, Torpedo; based on that first word balloon,
you're already in the middle of the exposition, if ya know what I mean.

I swear by Neptune, if I ever hear a man seriously say,
"Slice and rend it!" in my presence,
I shall declare him my soulmate for life.

So, what's the most annoying thing about fighting Aquaman? The dang fish, of course. Whenever a picture needs hung or a light bulb changed, Aquaman calls out the Hammerhead Shark and the Octopus. Oh, and the Whale; just on principle, there's always a whale.

Occasionally, there are bit parts for swordfish or flying fish (which are strangely ubiquitous in Aquaman's ocean), but usually it's the darned Whale, Octopus, and Shark. Most villians never get to touch Aquaman, because they're getting their butts handed to them by the Whale, the Octopus, and the Shark.

In Aquaman 36, what's the first thing Torpedo does?

Very smart guy. Robot? Six-foot marital aid? Whatever he is.


Not only is he smart, he's efficient and goal-oriented; that's always very hot in a guy (or, for that matter, in a robot or six-foot martial aid). 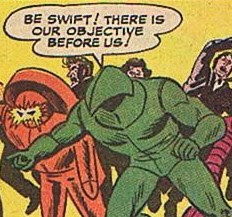 And you know darned well that any being who can say, "Continue to enjoy your weightless state -- or be destroyed!", could improvise the most beautiful love poetry! 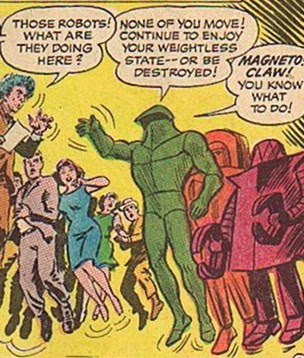 Torpedo has four slaves in his thrall:
Magneto, Claw, the English language, and me.

But wait, what's this? Oh, no! Say it isn't so! It turns out that Torpedo has a fatal flaw: 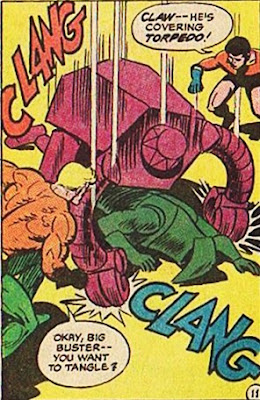 Darn! Oh, well. Neither Aqualad nor I should be surprised, I guess;
guys like that are always on the bottom.
Posted by Scipio at 7:31 AM

Oh, please let this be the basis of a Aquaman/Metal Men team-up. Pretty please?

Even as someone who grew up on Marvel comics, "Magneto" -- whether it rhymes with "Walnetto" or "Frito Bandito" -- always seemed like a sad way to make a name. The character himself was great (until he was wildly overused) but sticking the letter "o" onto the end of a common household object does not, to me, demonstrate a Dunsanian gift for naming imaginary things on Stan Lee's part.

(Bob Haney doesn't drape himself in glory, either, if he came up with it first.)

Agreement with Mr. Williams *and* the great Scipio.

It should be noted that my grand title is is a clever play on the fact that Polaris -- the Pole Star -- is indeed the location to which the magnetic point of a compass orientates itself.

2. Is Walnetto a Squirrel Girl foe?

3. We know that Torpedo is still around, by the way; he showed up at the big showdown between the Society and the Secret Six.

Belt Sandero would be Flex Mentallo's sidekick. Mentallo and Sandero vs Metallo and Despero. Say, I think I know what DC must be Counting Down to!

I only ever saw the Torpedo(-Man) on an episode of the Aquaman cartoon. I remember him swimming around and laughing at Aquaman the whole time, then he was buried in a sunken pirate ship or something.

He could definitely become a recurring foe for Aquaman. Just say he found some Nth metal or something, that way his armor is really tough and it explains how it can shift forms.

Remember, a villain is automatically an "old foe" of Aquaman the very first time he fights them; just ask Cutlass Charlie, Sea Thief, and Shark Norton.

And Dagon, from Justice League of America #35. I thought he had potential, with his Mera-like powers and Lovecraft-inspired name.

And come to think of it, Black Manta was also called an "old foe" in his first appearance!

sticking the letter "o" onto the end of a common household object does not, to me, demonstrate a Dunsanian gift for naming imaginary things on Stan Lee's part.

It's just a rule.

And thank heaven for that!

If I had a dime for every time I've thought, thank goodness I dodged THAT torpedo.

I have to say, Claw is going to be an interesting custom to make. A trapezoidal chunk of metal with a toothpaste tube cap on top.

And I know I'm going to be hearing the voice of that villain from Get Smart in my head; "Not the Craw; the Craw!!"

I'm pretty sure the character was named after the electrical device called a magneto (and pronounced with the long e). At least, I remember reading that somewhere.

So I'm not sure this is an example of the "noun/adjective+o" syndrome, rather the "what's a real word that sticks in my mind" syndrome.

Stan Lee did like those ends-in-o names, though, didn't he? I think he created three different characters called Electro! And there were all those Atlas-era monsters...

Magneto, a car part? Okay, if so, then Stan froze me out on Caped Carburetor, A Man Called Distributor, and the pulsatin' Purple Piston. Not to mention that he could have covered both ends by naming a character Bondo, but didn't. (He could have even titled the origin issue "Of Human Bondo!", but missed this wonderful chance.)

Why, Stan, why? I trusted my childhood to you!