Pantha -- Heading Up A New Feature!

Hello, kids! Rolling Head of Pantha here! I'm your guide to the fun world of Violence in Comics.

Do you what Bowdlerizing is, kids? It's when overly protective adults cut out of literature anything they think is "bad" for readers.

Adults love to bowdlerize any literature for children, taking out or altering any references to death, violence, even conflict. You should see how violently they savaged the Brothers Grimm! Why, some of their stories were barely recognizable afterwards, and could only be identified by dental records... . 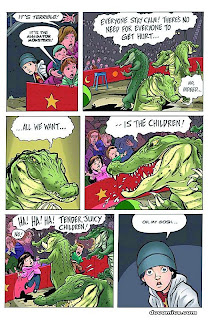 But it's a funny thing: de-fang stories for children and their point gets lost. Children, as anyone who's ever met one knows, are not subtle people. Behavioral amelioration of negative characters through positive feedback does not impress them. Witches are evil child-eaters and must be pushed into ovens; monsters are threats to society (just like Mike W. Barr!) and must be slain. In the words of the Alligator Men from the Monster Society of Evil, "We've lost! Quick! Eat the children!"

Fairy tales and the like are not designed to convince children that the world is without dangers. Quite they contrary. They are designed to put children on their guard, to show that there is evil in the world and it must be defeated through alertness, intelligence, and a willingness to act. And the fairy tale tendency of such lessons to be stark and graphic is not lessened one whit by the influence of comic books' other roots, like pulp fiction!

While comics books are no longer really written for children per se, they retain, to a large degree, the zoroastrian morality that typifies children's lit. For example, reformations are few and usually short-lived (such as that of Black Adam in 52).

Those who view comics more from the mythic/fairytale perspective like stark differences between Good and Evil. You'll find those people prefer DC Comics, where characters retain their fairy-talish extremeness and abstraction; to some, that is a virtue.

To others, it's a flaw that makes such reading childish; they prefer a more sophisticated and ostensibly realistic approach to the motivations and values of both heroes and villains. They hew toward the interesting moral complexities of pulp fiction, and so they gravitate toward offerings by Marvel comics.

Comics inherit not only the morality of the fairy tale, but its bloodthirstiness as well. While major characters are (mostly) immune to dying (or, at least, to remaining dead), minor characters and bystanders die gruesomely by the score -- just like me!

If a character that you like gets his block knocked off in a crossover melee, this reality can hit you pretty hard and unpleasantly. Trust me, I know how that feels! But getting bumped off gruesomely-- no matter your age, gender, race, or even species -- is part of the job when you're a supporting character, whether you're strangled and stuffed in a refrigerator or eaten by the Big Bad Wolf. 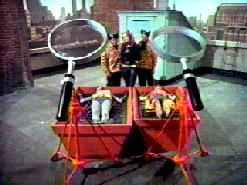 If your youth was during a time when comics were ruled by the Bowdlerizers, then you may think the Descent into Violence of Modern Comics is a sure sign of the End of Times. If you grew up watching deformed madmen try to kill Batman and Robin every week, (same bat-time, same bat-channel) in some of the most creatively horrible ways imaginable, you may have a thicker skin.

In any case, to a certain degree complaining about a superhero comic book being violent is like the frog being surprised that the scorpion stings; it is its nature. If you want to avoid it, read Nancy & Sluggo.

On second thought, kids, don't read Nancy & Sluggo; it's a hot bed of value-sapping surrealism, the artistic enemy of all right-thinking folk, and much worse for you than violence. 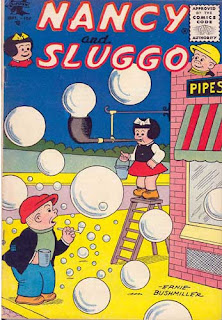 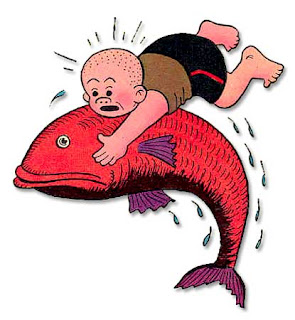 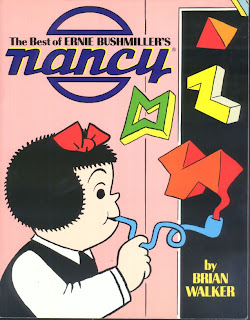 Anyway, all of this is a long way around the barn, just to let you kids know that I'll be hosting a fun new feature here on the Absorbascon:

GREAT CORPSES IN COMIC BOOK HISTORY!
Be the first on your block to collect 'em all!
Posted by Scipio at 7:24 AM

Hell ya can't wait for that feature! (Oh and I loved the article about violence, couldn't agree more)

How dare you show kids smoking pipes! Now when my kids see this (after I accidentally show it to them), they're gonna think that's its perfectly alright to blow abstract shapes out of it and make references to French post-modern paintings! For shame Scipio, for shame!

Can't wait for this feature.

You literally had me at Hello.

I can speak with personal experience of the vast disconnect between the stories children enjoy most and the stories adults want them to read. Thanks to the nature of my published "literature" I've had the pleasure of visiting a bunch of schools each year to give readings from my books and every time I do this I always start by reading the story I wrote based on the urban legend about the drugged-out babysitter who accidentally mistakes her infant charge for the turkey she has been ordered to put into the oven for dinner. I do this because the kids love it and it makes them want to read all of my books in hopes of finding something equally gross and/or frightening.

So, given how these things work out, it shouldn't come as any surprise that my publisher attempted to bowdlerize the story, asking me if it was possible for the babysitter to just put the baby in a cupboard instead. I refused, but the end of the story was rewritten behind my back and would have been published that way if it were not for the sneaky moves of my editor who switched the new ending with a slightly revised version of the original (grudgingly I removed the detail about the smell of "roasting turkey" wafting throughout the house).

So, to sum up, kids rock and adults are great big wussy-pants.

And in terms of GC in CBH, I'll be shocked if Mr. Barry Allen doesn't make the list.

This is a point I believe a lot of people were missing regarding the direction DC was taking after Infinite Crisis. Especially in light of the first four issues of JSA.

Well then, you may want to stay away from the History Channel.

On another note, I look forward to hearing more from the Rolling Head of Pantha. I do have one question though. When asked for answers, does she give them out like the Oracle of Delphi, or do you have to picker her up and shake her like a Magic 8-Ball with teeth?

The Rolling Head of Pantha rolls continuously, ejecting pearls of wisdom from her open mouth.

Once, for no apparent reason, I asked aloud "What is my purpose here?"

"To let let the world know what is badass and what is Claremont," came the reply.

I looked up and saw nothing. Looked down and caught only the faintest glance of the Rolling Head of Pantha rolling down Wisconsin Avenue.

This is simply the greatest thing on all the internets. Scipio, you are a genius.

"Those who view comics more from the mythic/fairytale perspective like stark differences between Good and Evil. You'll find those people prefer DC Comics, where characters retain their fairy-talish extremeness and abstraction; to some, that is a virtue.

To others, it's a flaw that makes such reading childish; they prefer a more sophisticated and ostensibly realistic approach to the motivations and values of both heroes and villains. They hew toward the interesting moral complexities of pulp fiction, and so they gravitate toward offerings by Marvel comics."

I've seen far too many The-Difference-Between-Marvel-and-DC analyses that make "us" look inherently better than "them" (no matter which side is making the comparison). Not only was this an inspired observation, but I couldn't detect a hint of derision.

It's like that silly Mac vs. PC debate. It's nice when venom and vitriol are stripped away and people realize that both options have pros and cons and it's really all a matter of personal choice.

That being said, Marvel sucks and Macs are for yuppie hipster losers.

Hmm...I've also heard the tale of the frog and the scorpion...but in the version I heard, when the dying frog asks "Why?!" the drowning scorpion shrugs and replies, "We're in the Middle East." :-(

Macs are for yuppie hipster losers

Hey, a Marvel vs. DC comment that didn't make me want to hit something!

Violence be damned in the face of Scipio's words!

As a former corpse myself (okay, so I was "faking" -- so what, I ask you! My opinion is still valid!) I heartily applaud your inauguration of this feature! Huzzah! And what an excellent post! I'm reminded of the Neil Gaiman story from about twenty years ago with the Riddler in a warehouse of giant props bitching about the current state of comics. "I mean, the Joker kills people now!" he whined. And even back then I thought, "Didn't he start out killing people?" That said, something about the Didio/Johns model of comics gets on my nerves. Maybe it's the sheer grinding misery of them, or that the villains seem to be the only ones enjoying themselves (because they have no souls, apparently). I guess I'd like to see more of the up-side of being a hero. After all, superheroes who mainly cry and moan and complain are so Marvel.

"...minor characters and bystanders die gruesomely by the score -- just like me!"

You die gruesomely and by the score? That's gotta sting. And complicate any wills you set up. ("Give your stuff back? But you were dead! Again! This time, I'm keeping it!")

Bowdlerizing is the devil's work, rooted in a painful misconception that the human brain is a blank slate upon birth, and that people are who we make them. Gack.

Minor characters die by the score in a gruesome manner, just as did Pantha.