Though I am a classical scholar, trained for years and dedicated to preserving and disseminating the truth of our glorious ancient past, yet have I held my tongue about the deceptions of 300.

With untold talents of silver having flowed through the box office from legions of ticket-buyers, I have cowered in fear at its numberless fans, lest they advance upon me, overwhelming just as the Persian horde did the defenders of Thermopylae. But, by Zeus, no longer!

Compatriots of the internet, the heart within me forbids my tongue rest. Too long have I remained silent on this mockery of history, this 300, while my fellow citizens flock to drink at the poison well of its lies!

Thus I shall now tell ye the true story of the battle of Thermopylae and its real hero: 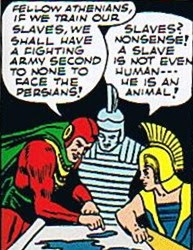 During the Persian War, Starman, his faith in the human spirit unbreakable, advocated to the Athenians that slaves be armed and trained to help the defense of Greece and, thus, of western civilization.

"As you treat men," he argued, "so shall they behave! Let us treat our slaves as fellow citizens and, in their eagerness to prove themselves worthy, they shall out-do us in their bravery at arms in protecting our nations."

But the Athenians, scoffing at his faith in mere slaves, rejected his proposal. Defiant, Starman 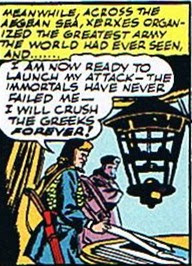 armed and trained his own slaves, preparing them to join him in battle against the Persian hordes.

Meanwhile, across the Aegean Sea, Xerxes organized the greatest army the world had ever seen, ready to launch his attack with his unfailing 'Immortals' and crush the Greeks forever. As the caption confirms. 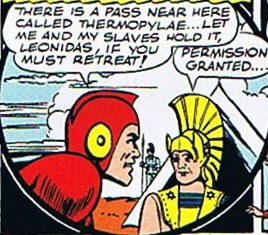 But the genius of Starman being equal to the emergency, he crafted a plan. He and his followers would delay the Persian onslaught by occupying the narrow pass at Thermopylae. 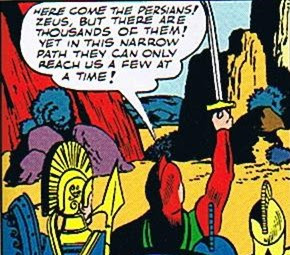 This would Starman and his band of slave-warriors do, while the cowardly Leonidas and his weak-willed Spartans fled.

Inspiring his army of slaves with his unparalleled oratory, Starman led his troops to fight for the 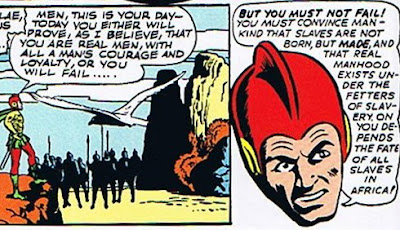 freedom of the very society that had denied them theirs.

Moved by this comic book irony, the tergiversatory Spartans finally found their backbones, and 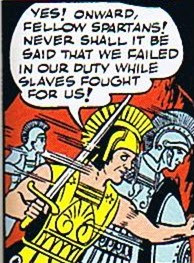 rallied to support the brave slaves.

Meanwhile Starman used his cosmic rod to hold back the Persian hordes. No, really. The contemporary sources all agree on that point.

The Spartans having relieved 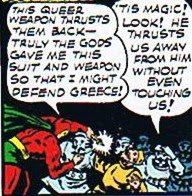 them of defending the pass, Starman and his brave slaves returned to Athens, having both saved Western civilization and taught it the error of its ways.

And just how long have you been waiting to use the word tergiversatory in a post?

I knew they said Miller didn't get his facts right, but I just couldn't believe how wrong he got them!

So the slaves were from Athens, even though it was Sparta defending themselves? Something doesn't connect here...unless...yes, even my greek history text books must be wrong about their rivalry as well!

Starman should run for president.

Starman's already been President, hasn't he?

No...sorry, I always confuse Lincoln with Rama V...it's the cosmic rod, I think...

Wow, I knew the Battle of Thermopylae was dramatic... but I didn't know it was ::gasp:: STARMAN dramatic!

Assist me to the couch...

I would make some half-witted, sniggering joke about the last panel, but truthfully, it would be futile. What could any man write that would not pale in comparison to the panel itself?

Thank you for unearthing such a treasure of the ancients, Scipio.

In it, the JSAers teach people of various eras to overcome their fears and prejudices; a sort of "JSA versus the Multiculturalism of Fear", if I may say so...!

The only thing missing is Jimmy Olsen.

How could he be named?
Demetrios Solonos Alimousios, perhaps? (Demetrios Solonos is a name that could be found amongst us modern greeks and a play on Jimmy Olsen. Of course his father would have to be named Solon, but what the hell. He would have to be from Alimos, a suburb of Athens (the original Metropolis), similar to Thucydides (historian, like Olsen is a photojournalist, sort of))

"This is blasphemy. This is madness!"

(cosmic sticked down the well)

It is at moments such as these when I come face to face with my own inadequacy with regard to brilliant humor.

I was gonna ask who did the quite bad artwork displayed here (clearly not Burnley or Meskin), when I suddenly remembered how Google works and went to do that instead, after first boldly guessing that it looks like the handiwork of H.G.Peter, especially the expression on Leonidas' face. But by the time I thought of all that, the comment window had already opened, and it was too late to st

a sort of "JSA versus the Multiculturalism of Fear", if I may say so...!

LOL; I'm picturing your dust-jacket photo as a drawing of the Jonathan Crane in his Scarecrow outfit... .

Anyway, the JSA story really does seem to be on point with your own book; you can read it yourself in the All-Star Archive Volume 5, Jacob!

Thanks for the oh so marvel way of putting the story, lol I must use you as my next script writter in part 2, Also if you would be so kind as to play the part of the gimp again like you did in pulp fiction I think it would make a great add-in to many of my movies., lol but wait let's take this to the next level? Let us see how you became the gimp, and better yet lets make you the writter in that part of the *script* as well lol remember folks it is hollywood I am just taking it to the next generation :) but ofcourse there will be some rod smoker that always disagrees with how it went down...