Today my extremely deep thanks go out to regular Absorbascommenter Kyle-Latino, who has done me the great kindness of creating an all-underwater map for Heroclix. This is something I've wanted for years now, but no one was able to help me; Kyle was and he did!

Finally, we have a Heroclix map for Aquaman, the fishclix, and other aquatic figures (standard and customized). Behold! 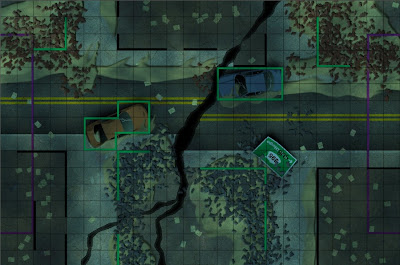 Some of the detail might be a bit hard to see on this picture (which does not do the original justice); you can download the full-size pdf image from this location.

As mentioned before, in an underwater map, hindering terrain affects only line of sight/targeting, not movement; that's because you can just swim over stuff like that. Thus, the collapsed brick walls are simply edged in green rather than being completely outlined.

At last, any customs of Aquaman related characters you may have had made, the fishclix pogs, the aquatic objects, all have a home of their own (instead of having to rely on the ersatz "Atlantis Rising" Battle Field Condition Card). I am prevailing upon the good folks at Xion Studios to make this map available for public purchase from them so that as many of you can enjoy it as possible; I'll let you know if they do.

Sub Diego has won its rightful place in the Heroclix world ... at the bottom of the ocean!

Very nice looking Scipio. I've made my own maps in the past, but this looks as good as anything put out by Wizkids.

Speaking of clix, did you hear that the next buy it by the brick figure is going to be Phantom Stanger?

Glad you like it. Lucky it didn't take as long as I thought it was going to. I may do another one later.

Gail Simone on Wonder Woman... HOW DO YOU FEEL ABOUT THAT SIR?

That is super sweet. Think of all the Pfeifer run theme battles you could do with those customs. Aquaman and fish vs Eel and underwater thugs. Aquaman and crew vs the Experienced OMACs. I say again, super sweet.

Yes, Jon, very excited about the Stranger! Wrote a bit about his "special powers" earlier. Now that he's going to be the brick figure, everyone will 'buy by the brick' because I can't imagine anyone not wanting the Phantom Stranger!

Devon: glad you like it! I'm having Charlie print us up one right away.

Kyle-Latino; thanks! Another such would be great. I'd vote for one out in the open seafloor or in Atlantis.

Ben: You know who I'm anxious to try out underwater? Amazo, allowing him to copy Aquaman's aquatic ability and control of the fish pogs!