Hello! Rolling Head of Pantha here to share with you one of most traditional, wholesome elements of comic books ... a fresh corpse!

This is a personal favorite of mine. Oh, there's a lot to be said for slapdash impersonal gore, like, say, having your head knocked off by an insane Superman, well, knock-off. But fresh corpses are so much more meaningful when love and family are involved.

This one deserves a little set up...


Once upon a time, a highly-educated father loved his son so much, he took him with him on an exciting work-trip to the mysterious ancient land of Egypt.

But, as the archaeologist was hard at working exploring an ancient temple, his son wandered off, like a bad boy.

Rather than stay with his smart, hard-working, loving father, this boy wandered off and became entranced by the commanding eyes of a tall bearded older man. Much much much older ... 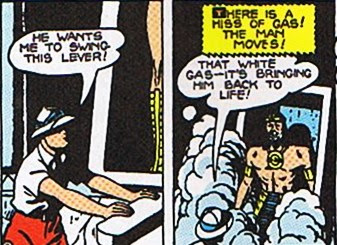 Oh, that's a mistake! When an older stranger asks you to swing his lever, little boy,
you should go running back to your daddy.

The white gas that reanimated the old man had another effect, less salutary. 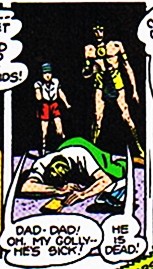 Yep; it de-animated the Old Man.

the fresh corpse of Sven Nelson,
whom his son just unintentionally killed. 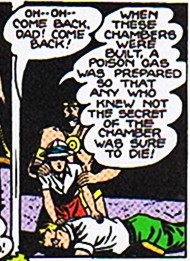 Don't worry! It's okay; Kent's young and bounces right back! 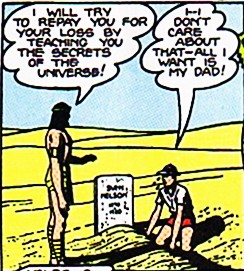 
In any case, the next time you feel like complaining about death and killing in your current comics, just remember the little boy Kent Nelson, who killed his own father with the help of a creepy old Egyptian guy, and then they buried him in the middle of the desert.
Posted by Scipio at 3:05 PM

Speaking of Nelsons and dead bodies, I look forward to the new Dr. Fate discovering the rotting corpse of Ralph Dibny in his basement.

Why didn't the gas kill Kent Nelson? He was right there. Or was the secret that only young boys could open the sarcophagus?

Come on. You can find something more gory than that.

Nabu has some Father Issues,I think....

I can't help wondering where Nabu and Kent managed to find a headstone (complete with Sven's name, no less) in the middle of the Egyptian desert.

Ragnell: More gory, yes. But more unpleasant than a boy realizing he's just killed his own father? No.

Jonnie: In a panel, I didn't use, Nabu explains the gas was designed to work only those "who didn't know the secret of the temple", which I took to mean "outside of the room with the lever".

I seem to recall a comic somewhere that had an adult Kent darkly surmising that Nabu shielded him from the gas while allowing it to kill his father...if you don't have a convenient orphan to become your ward and protege, just make one!

To me, the yardstick for "acceptable" violence in a comic book shouldn't be the level of gore, but the necessity to the story. Sven Nelson's death? Necessary. Pantha's head bouncing down the street? Not so much.

To be honest, the Dr. Fate sequence was written much better than the entirety of World War III.

Golden Age comics were easily as violent as today's, but given the black & white morality of the older tales the tragedies were generally offset by a sense of closure denied modern comics protagonists who are too busy fretting over moral relativism to actually ... you know ... save lives.

(I'm looking at you two especially, J'onn and Crispus Allen.)

"There is a hiss of gas! The man moves!"

Y'know, I'd heard that Nabu's "hummus farts" were deadly but goddamn.

I think it was the "Black Reign" storyline that revealed Nabu was actually kind of a jerk, lying to his different hosts to get what he wanted.

Nabu was actually kind of a jerk, lying to his different hosts to get what he wanted.