Mission: Locate the Hall of Justice!

Where is "the Hall"? 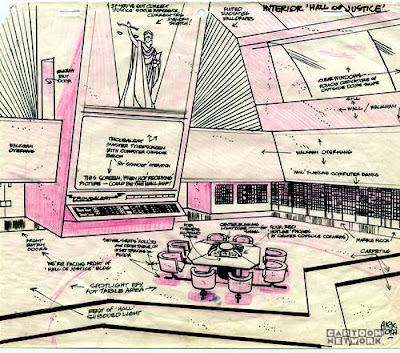 For me, the highlight of Brad Meltzer's JLA has been his introduction of the Hall of Justice, located in Washington DC (something I've been a very strong advocate of).

But as someone who lives in DC, I'm a little frustrated by the vague tree-shrouded background; where in DC is the Hall of Justice? I mean, we know where the JSA HQ is; it's not just "somewhere in Manhattan".

So where is the Hall of Justice? Couple things we can deduce about its location...

No, no, non-DC residents; I believe a man can fly, but I will never believe that big-ass building was secretly erected on the National Mall. That would take an act of Congress and, even more daunting, approval by the Pennsylvania Avenue Development Corporation.

It's on private property outside the original city (that's everything south of Florida Avenue).

I mean, they build the thing in the six months they were sitting around that table, without anybody else knowing about it. To me that means a Big Honking Fence on a set-back property; it sure as heck ain't in downtown or Midcity.

If it were, everyone would know, because the Intowner would have had weekly updates on the zoning meetings and ANC debates about it ("Ward 3 Neighborhood Forum Heres Residents's Objections to Constrution of Hedquarters of National Organization; DC Historical Preservation Society Weights in On Possible Obskuring of Lampost Lanmark"), and the City Paper would have a cover story with an in-depth human interest angle on every single local businesses even slightly disrupted or inconvenienced ("Justice Beleaguered: The JLA protects you from destruction; unless you're their neighbor."). 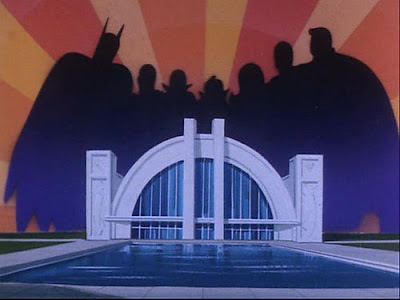 That's just the kind of people the Leaguers are. No point in making a public headquarters that the public can't get to. I mean, it's not like it's the National Arboretum or the Jefferson Memorial!

Personally, I'm picturing it on the site of National Cathedral (because no one knows what the point of that is in our universe, let alone the DCU). Big area, lots of room for trees and a reflecting pool, but still located directly at an extremely public location (the intersection of two great thoroughfares, Massachusetts and Wisconsin Avenues).
Posted by Scipio at 12:35 PM

Silly, everyone knows it's in Cincinnati.

Isn't the National Cathedral on a slight rise, with the HoJ in JLA #7 on flat land?

I'd put it somewhere around the FDR Memorial and the Jefferson Memorial. The last time I was in DC was 1997, but I remember a fair amount of flat, moderately wooded land around there.

Besides, remember JLA/Avengers: DC-Earth is a little bigger....

I've been to the Mall about a dozen times and I've never yet found the food court. The Gap either.

Tom, that's still 'forbidden territory'; only the government could build there. As for the Cathedral site, it would be easily for the JLA to have it flattened.

"That's just the kind of people the Leaguers are. No point in making a public headquarters that the public can't get to. I mean, it's not like it's the National Arboretum or the Jefferson Memorial!"

ha! As a constant visitor to the DC area, I couldn't help but fall out of my seat laughing at this.

...only the government could build there.

See, that doesn't seem like as big an impediment to me. If lobbyists can try to open up Yellowstone to snowmobiles, surely Superman can bend the President's ear. The JLA could even lease the land from the feds, with assurances that it would be eco-friendly.

As for building in secrecy over 6 months, between Green Lantern rings and Kryptonian and Amazonian technology, I'm sure there are a few good ways to hide the construction.

I defer to your experiences as a DC resident, of course. :)

purely based on looking over Google maps..I'm going to guess that its somewhere on the waterfront. Maybe near the East Potomac park around Ohio Drive? Or perhaps close to the mall on the Potomac formerly where some warehouses were located?

I wonder if their little frontwise "shimmering lake" will become the algae-breeding colony that the Reflecting Pond has become??

Okay, what's the over/under on issues until the DC Hall of Justice is attacked AND the "door" to the satellite is knocked out?

Re: over/under - it's probably more like 12 issues, since Meltzer has a knack for overly decompressing his books.

Location: It can't be opposite the Lincoln Memorial, unless they got rid of the WWII memorial to put it there.

Though I wouldn't put it past Brad Meltzer. In his universe, maybe the WWII memorial was actually a sham to mask the HoJ's construction!

Scipio, could you contact me at acespotATyahooDOTcom - I need your help with something I just wrote - as you're the master of miscontruing text, I wanted to make sure my newest post can't be misconstrued before I publish it. Thanks.

*My* question is, if this was the former HQ site of the All-Star Squadron, as the book says... wha' happened to its *original* site, the Trylon and Perisphere? Did they get destroyed sometime during the war?

Hmm... East Potomac Park, that whole island is national parkland. And not accessible except by auto.

As a local, I thought it would be situated at the center of Roosevelt Island. It's a small park-like island in the middle of the Potomac River, wedged between Washington and Arlington, VA. It's heavily forested and has jogging/bike trails. At the center is a small paved plaza with a fountain, statue of Theodore Roosevelt and some markers with some Roosevelt quotes. Standing in the plaza you're just closed in by trees. Perfect for the Hall...except as a park, no one is allowed in after dark. (Jason B)

Okay, I'm going to just suggest that of all the construction/destruction/differences from reality possibilities here, *building a bridge* is the most reasonable.

I can only say I'm waiting for Meltzer to introduce El Dorado to the new Justice League.

Wait, what's the cathedral in that one scene in Infinite Crisis where Mr. Terrific tells Hal Jordan he's an atheist? For some reason, I want to say it's the National Cathedral, but I suspect I'm misremembering and it's either in Gotham or Metropolis.

"As for the Cathedral site, it would be easily for the JLA to have it flattened."

They could easily make it look like collateral damage.

Then, they could make a speech saying that their new headquarters, on the grounds of the villainously destroyed Cathedral, will stand as a monument etc etc..."

"I wonder if their little frontwise "shimmering lake" will become the algae-breeding colony that the Reflecting Pond has become??"

By design, so Aquaman has some friends around.

Well it has a reflecting pound out in front... maybe they built it on the Lincoln Memorial. I mean, how cool would that be, in the back of the Hall of Justice meeting room is the Great Emancipator? And it probably will talk too. Cool.

Well, like everything else being built "in" Washington, DC, I assumed it was actually in Landover.

Can't take down the National Cathedral, a President is buried there. Actually, since there is FedEx and the new stadium going up I will say the former site of RFK is the location of the Hall.

I'm increasingly convinced that its East Potomac Park. Look at the picture in JLA..its surrounded by trees!

The problem with a lake choked by algae is that, eventually fish die in those sorts of places. Most times, when you see anything living there-its been introduced and is a particularly hardy algae friendly species...
Plus, its never been establsihed that Aquaman can "talk" to freshwater organisms. Or has it?

Man, I'd love the JLA a million times more if they hung out in RFK, the Ugliest Stadium Ever.

Christ, they could hold meetings during games - no one would notice; no one is there. Hell, they could play the Nationals and the place wouldn't sell out.

The comics fan in me says "You really think they're spending $600 million on a new stadium? JLA HQ in SW!"

Sadly, the realist in me says, "Yes".

Every time I'm in a stadium or ballpark I always imagine that there is an A.I.M. base underneath it.

If the JLA's public headquarters is in Washington, they'd better hope it never gets attacked by Gorilla Grodd.

People are likely to mistake him for a big planet...