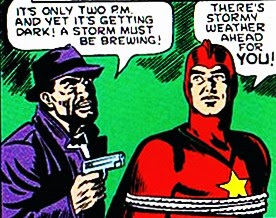 "Therefore, I shall not even deign to look at you as I sass you derisively." Well that was just rude! Here that nice thug was trying to give Starman an update on the weather, and he got all snippy.

And the old man with the cattle prod COULD have done much worse than freeze him to an iceberg...rectal probe anyone?

For a guy with a silly looking fin on his head, I don't see where Starman has the moral highground here.

There needs to be a Starman manual to teach up and coming superheroes how to be badass! Exclamation included.

Who was the old guy with the cattle prod who was going to freeze him to an iceberg?

Believe it or not, that was The Moon.