Wonder Woman doesn't really have any friends, does she?

I don't mean supporting cast member type friends, though Zeus knows, she doesn't really have any of those either. Poor Diana is a victim (along with other notable figures like the post-Crisis Flashes and Aquaman) of a phenomenon I call "supporting castastrophe", the complete turnover of her entire supporting cast whenever she gets a new writer. Hippolyta, Etta Candy, Steve Trevor, Julia Kapatelis, Mindi Mayer, Ed that Detective Guy from Boston, the Gang from Taco Whiz, whoever the heck was in the Byrne run, Ferdinand the Minotaur and Rucka's Embassy Gang -- the Legion of Substituted Zeroes has an enormous battalion of Wonder Woman's castmembers.

But I'm not talking them; I'm talking about, well, "superfriends", for lack of a better term.

Batman and Superman are friends. Shovel all you want your Milleresque hooey about their being "naturally at odds with each" and "they could never be friends". Whether they're chummily selling war bonds together or bickering like an old married couple, the fact remains that they are socially paired.

Green Lantern and Flash, the Silver Age Duo, were also socially paired. Of course, in the Bronze Age, there was more of a Green Lantern / Green Arrow thing, but one thing was sure: none of the three hung out with Wonder Woman, sharing a six pack of ambrosia.

The JLA's Weirdo-in-Residence, the Martian Manhunter, has usually been associated with the other odd man out, Aquaman; they were "the Backup Boys". After the classical era of the JLA, their social pairing was reinforced by their work together in the Detroit League, and J'onn's repeated appearances in Arthur's (many many) titles.

Wonder Woman? The only woman in the original JLA was, de facto, a loner. Now, there have been so mighty efforts in the last few years to shore up her role in "DC's Trinity", and great strides have been made in making her a distinct personality with definite relationships with Batman and Superman.

But friends? Despite Brad Meltzer's insistence that the JLAers are all really really REALLY chummy, most other people I know think of them primarily as colleagues of hers. Batman and Superman are, historically and conceptually, paired with each other. "Batman & Wonder Woman" or "Wonder Woman & Superman" is never going to sound as natural as "Superman & Batman".

JLU, the animated series, made some steps in the right direction by pairing Wonder Woman with Hawkgirl. It was rather contentious, so I'm not certain it was a friendship, exactly, but it was certainly a social pairing, regardless of what their attitudes were toward each other at any particular point in the series. 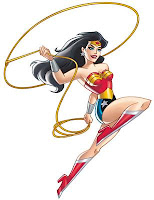 Now that Wonder Woman and Hawkgirl are both in the JLA, will this pairing be reiterated? Perhaps it would be better if Wonder Woman were strongly paired with Black Canary, who like Wonder Woman is a hero with a strong Golden Age pedigree. It might help in the never-ending battle to have Black Canary taken seriously (because that'll have another serious setback when they have marry that loser, Green Arrow, whom she should have dumped permanently about 10,000 times ago).

Of course, since someone at DC seems insistent to marry Canary and Arrow, those two are, unavoidably, going to be a social pairing; so, maybe Wonder Woman should be best friends with Hawkgirl. Hawkgirl could certainly use the boost after DC fumbled her own title.

Regardless, Wonder Woman, of ALL female characters in the DCU, should have at least one female superfriend!

Honestly, I'd like her to get closer to Lois. She's not a superhero, but I can't help but feel there's a kinship there whenever the two of them are together and some writer isn't trying to shoehorn a love triangle into it. I liked their interaction in the most recent Superman fill-in, for example.

Wonder Woman is an island.

But then maybe she might want to hang out with Kate Spencer after the murder trial.

You never know. It could happen.

Redeem Wonder Girl and you've got a pairing. Family, not friends? Ok, how about Mary Marvel as a "little sister". Or would that invariably be a mentor-student relationship and (I guess) excluded.

Too bad about Isis, maybe the mythicals could have paired up. Actually, maybe Diana is a kind of tomboy who would rather pal around with men. Or maybe she needs a gay friend. Who does that leave us these days?

I agree with the WW/Isis team idea. I'm pretty sure the new jacks would've cried, "OMG @ pandering to people older than me! The wrong! The woes!" They'll cry about anything, though. It really is too bad that Isis had to die from Gwen Stacy's Disease because that'd have been one hellified team-up.

Y'know what has potential? Aw, heck.. you know what would be awesome?!?

I would think that Zatanna would be an interesting pair. After all, Wonder Woman is all mythology and magic stuff herself, so she shouldn't have the issue with believing Zatanna's magic is real like many of the other heroes would.

Although I've never read it, it would seem to make sense for Wonder Woman to occasionally have some dealings with the Birds of Prey crew. I would think that her and Oracle would get along. They have both been around for a while.

These are all very interesting suggestions!

I'm particularly amused by the idea of her palling around with Obsidian...

There has been occasional effort to get an Aquaman-WW, royalty-from-mythic-Greek-civilizations-of-a-feather kind of thing going that I thought had some prima facie plausibility.

But Mary Marvel works, too-- remember, she's got the wisdom of Solomon, so she's hardly a typical teenager.

Pair her up with Mera.

Just so we get to see more Mera.

If she wishes, she can be my friend. It can't go worse than my "friendship" with Emerald Empress.

And I'll even let her tie me up.

I loved the Superman/Shazam First Thunder series, so I think the suggestion of Wonder Woman and Mary Marvel would be a great pairing, I mean WW & MM even works upside-down! You've got two people with the power of the Gods, but one of whom is basically untested and role-less in the DCU.

Plus with Mary Marvel apparently going to play a huge role in Countdown, it wouldn't be too hard to tie in after.

An all-too brief scene in Birds Of Prey showing Black Canary and Wonder Woman sparring at the Watchtower showed me the two of them could work as a social paring.

Really though, she should just start dating Jimmy Olson so there could be some Lois & Clark/Diana & Jimmy double dates.

The animated JLU also had a Batman/Wonder Woman "bad boy and the princess" thing going on which I liked.

Maybe WW should pal around with Grace (the Outsiders)..the other perceived expatriated Amazon?? heh..a love triangle with Thunder?

"Really though, she should just start dating Jimmy Olson so there could be some Lois & Clark/Diana & Jimmy double dates."

Wonder Woman the cougar; I love it! Much more scandalous than the Max Lord thing.

I second Lois as Wonder Woman's new BFF. Furthermore, Lois should set WW up with a man. Then they can all double date.

Hawkgirl is gonna get paired with Roy in JLA. I can't really see WW hanging out with Vixen. She'd have nothing to say to her. It looks like another lonely league for Diana.

What about Wonder Woman and Batwoman? Although the Kate Spencer pairing is great because every writer tries to "ground" Diana, and Kate would just knock her around with wit and sarcasm...

Batwoman would be a good pairing, Rico, but I was really thinking of someone in the JLA. Someone outside the JLA would then require extra plot time for Diana to meet and work with and befriend.

Why does she need a pairing at all? I like that she's this mythic construction that people are intimidated by. Not all characters need a vulnerable side or whatever. I think it would make a great single issue where she awkwardly tries to make friends with someone - say on Thanksgiving or something when no crimes are being committed.

Otherwise, let's have one character who doesn't really need anyone else and be self-relient - but not in the a-hole Batman way that happened just before the last crisis.

Otherwise, I vote Aquaman, and not just because this is a site dedicated to his awesomeness. I just figure, why not?

I've been advocating Wonder Woman and Mary Marvel hanging out for years now. The only thing I want from a Wonder Woman comic is to see how the Amazons react to Mary's channeling the powers of the gods -- or goddesses, if they do what's right and have the old version of her acronym put back in place.
I also think Black Adam and Artemis should get together based on much the same principle, but that's another story altogether.

Although I really like joncormier's idea of her being perfect in everything but a little socially awkward. Not her fault; her manners are impeccable and she's so naturally charismatic people like being around her...just that no one feels truly comfortable around her. I knew a girl in high school who was actually something like that -- everybody loved her and she was gorgeous to boot, but she never dated anyone because everyone was too intimidated by her. Lots of friends but not many close friends because she was so popular. That would be interesting to explore.

Wonder Woman and Black Canary would certainly be an interesting pairing, especially considering the fact the Black Canary was the post-crisis replacement for Wonder Woman who got retconned out of the early Justice League. Of course, it seems that Meltzer has done away with that, but who knows? He's a moron anyways, so he probably was unaware.

But I agree with my fellow posters: WW and Lois Lane: BFF.