Some sad Marvel cynic on another blog (which shall remain nameless) finds it oh-so-amusing that silly DC folk like me (including me specifically) can be so passionate over an 'obvious D lister' like Aquaman.

Uh-huh. Well, I know what Aquaman can do. I don't really know what Namor does, other than throw hissy fits and make long speeches while bursting through the surface of the sea; I mean, Lloyd Bridges can do that on a bad day. I guess Namor's pointy ears, itsy bitsy footsie wings, and preposterous speech patterns make him cool.

I wouldn't know what's cool; after all, I read Aquaman.

Anyway, for those who just don't get it, this may help.

Here's Aquaman, casually bitch-slapping all-powerful sorceror Felix Faust into submission with some flying fish while the entire Justice League stands around pathetically helpless. "Thud", you'll note, is the sound of a wizard getting hit in the face with a fish.

Superman stops you. Batman captures you. Wonder Woman defeats you.

Aquaman humilates you.
Utterly.
Every time. 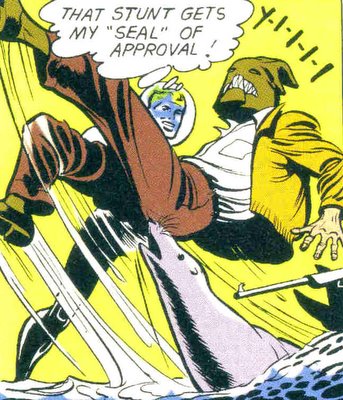 Everyone bested by Aquaman is publicly humiliated, with an indelible scarring effect on their permanent criminal record.

"Oh, in mid-heist, I was bitch-slapped by a flying fish, then after being pinned to wall by an archery-trained octopus, tiny hermit crabs attacked my testicles and my screaming brought the cops. And all the while, Aquaman just stood off to the side with his hands on his hips, laughing and laughing...." 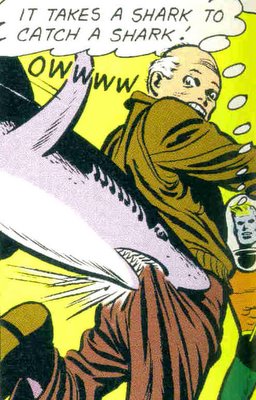 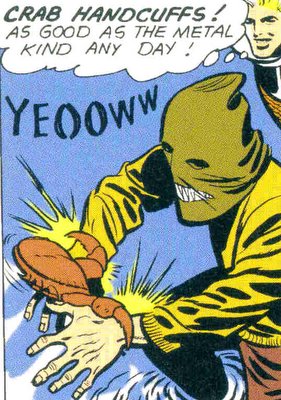 Being humiliated by Aquaman ends your criminal career. That's why the guy's got next to no rogue's gallery; no one wants to go up against Aquaman a second time. Cutlass Charlie? The Invisible Un-Thing? Shark Nelson? Even the AWESOME HUMAN FLYING FISH? Gone; done; history.

Everyone's afraid to tackle him; it seems easy, but when he beats you -- and he will -- he will humiliate you and your career will be over. Nope; it's just too great a risk. 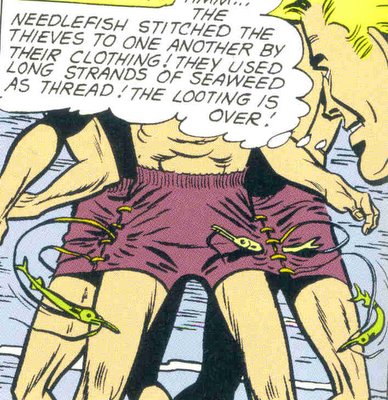 Aquaman does not have time to punch you; he's too busy laughing. Got to wrap this up quickly, so I can get to bed and dream up new ways of torturing people with fish! "Ever wonder what it would be like if a pufferfish swam down your throat while an electric eel nested in your colon? Let's find out!!!"

The man loves his work. I do, too. 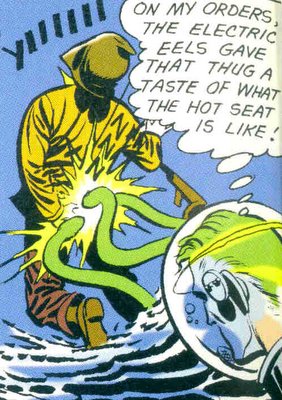 Aquaman will fuck you up for life.

"You're a mean bastard when you're drunk, Aquaman."

The Marvel parallel would be getting beaten by Power Pack

Ahh... Now, I see why he remained popular while even Starman faded to obscurity.

At least someone seems to get it...

Forget swords and sorcery, bring back that helmet! People from undersea nations should be required by law to wear fishbowls on their heads when on the surface world regardless of whether or not they breathe air.

This is going out to everyone I know.

Aquaman an obvious D-lister?? Fie on that!

Stop any ten people on the street and ask them if they've ever heard of Teen Titans, Hawkman, Doom Patrol, or the Atom. I'll best most if not all say "no". But Aquaman? Sure, he's mostly remembered (by the non-comics community) for Super Friends, but at least he's remembered!

I should confess here that I was strongly attracted to the Peter David era Aquaman. I don't know if it was the beard, the perpetual manly shirtlessness, or even the hook.

The Bow of Topo should be the name of the damn new series.

A companion series, "Topo: Bow of Star City" will be replacing Green Arrow.

Namor beat up Nazis. With his fists. Not fish, fists.

Not much to do in last sixty years then, I'll bet.

Probably goes shopping with the Red Bee. He used to fight Nazis.

No way. Don't you read Captain America? Nazis are alive and well and come with Red Skulls. But really, it was the Aquaman-peeing-on-Hal-Jordan thing that upset you, right? Yeah, that was a bit uncalled for.

"the Aquaman-peeing-on-Hal-Jordan thing that upset you,"

Upset me? Are you NUTS?

I already have the picture on a sweatshirt...

Hey, I'm sorry someone was rude about Aquaman (though it was great to see all those panels,)anyone who's enjoyed Ookla the Mok Aquaman song has respect. However there's something so darn attractive about Namor, whether it's Everett drawing him in black trunks, motorcycle boots and leather jacket in the 50's or Kirby in the 60's (I am a big Kirby fan, but I acknowledge a certain overpowering wholesomeness to his work- ie Lashina should titllate me at least a little, but doesn't...but Namor- sexy before I had the vocabulary to explain.) Respect to Aquaman and his humilating powers, but he's not my dream date...