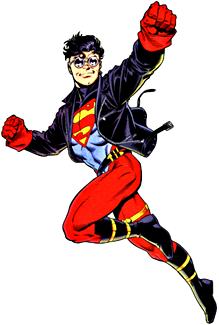 Today, however, it occurred to me that it's quite possible -- even likely -- that Tim is not trying to create a Superboy clone.

Connor was Tim's best friend, true enough. But Superboy was created by Lex Luthor to be a weapon, and he was. Through some vague sci-fi "pre-programming", Lex was able to control Superboy to attack his foes. Superboy broke Tim's arm, in fact. One remembers things like that.

Furthermore, while Superboy Prime was a million times more powerful than Superboy, it was still a Superboy whom Robin watched kill scores of editorially unnecessary Titans, ensuring the everlasting fame of the Rolling Head of Pantha. One remembers things like that, too.

In the year before OYL, Superman, the logical person to stop a Superboy run amok, has been powerless and out of commission. Meanwhile, the Brotherhood of Evil has been stealing cloning technology and personnel, ostensibly to make a new body for the Brain, but with who know what other goal in mind.


I don't think Robin is to trying recreate Superboy.

I think he's trying to make sure no one else can.
Posted by Scipio at 8:04 AM

I believe the Siegels already have done that - making sure nobody else can create a Superboy- unless DC/Warner Bros. wins an appeal....

I can't believe I used up comment space for that...

Scip, I disagree completely. There's been some nastiness with Superboys, it's true, but one of the most striking things in infinite crisis is this: when the tower is still standing and it looks like Alex Luthor and Superboy Prime might succeed in their quest for the Archie-verse, it isn't Superman, Batman or Wonderwoman who puts it on the line to stop it... it's Conner. It's true, the Supermen ultimately take out Superboy Prime, but it's Conner Kent that unravels the evil plan that threatened the very fabric of our beloved DCU. I think it makes up for the broken arm. Plus, Conner finally came into his own and became a hero in his own right... Infinite Crisis upped his stock big time, so there's no way he's not coming back... honestly, after his performance in IC, if he had his own series, who wouldn't buy it?

Poor Tim actually has a plethora of potential clones to choose from. In the last two years, (real time, so that's like, what, three months DCU time?), Tim also lost his father, his ex-girlfriend, and his potential future girlfriend (though she came back on her own). And that's not even mentioning his mother...

A potentially interesting twist. Given how Geoff Johns hoodwinked all the folks who thought "Infinite Crisis" would be about Kal-L offering the modern DCU a crash course in superheroics, I wouldn't put it past him to be misdirecting us here as well.

My concern is that Tim may be following Batman's path in all the wrong ways, namely the pride and arrogance to think he can bring back the dead, and that this Superboy will be better because he made him. Kinda makes you wonder what they spent the last year doing on their little trip, eh? ;)

He's trying to remake Superboy, but he's going to end up making the evil Conner that popped up in the Titans Tomorrow arc.

Could he be trying to find a way to stop a Superboy if another one ever appears?

After all, if Bruce can create incapacitating protocols for the JLA, Tim can do it for the Titans...right?

"BEAST BOY PROTOCOL: Dangle Jennifer Lopez in front of him. Repeat as necessary."

I like your theory. Not saying I agree, but I like it.
Seeing that old picture of Conner made me wonder how long it will take for the leather jacket to become the same kind of fashion faux pas as wearing a cape?

It's an interesting theory, but I don't buy it. It's clearly possible to combine Superman's DNA with Luthor's -- Conner was proof of that. Conner himself had a clone, Match. Tim met him. What Tim is doing is clearly possible, and he should know that.

Not forgetting that if Tim clones his friend, he's not getting him back, just a guy with his physical attributes (maybe).

Regarding protocols for elimination of Titans: I don't think the Ravager one can be carried out easily by an OMAC.

You know, it just occured to me that Alex Luthor and Conner were technically half-brothers. Why the hell didn't Johns use that?

RAVEN PROTOCOL: Jessica Simpson. It would work for the toon version anyway...

Now I know Tim's smart and has amazing deductive skills and all the rest of it, but does anyone else find it a little bit....dare I say cheesy....that a 16/17yr old kid is working on CLONING someone? What is he, Brainiac 5's secret great-great-great uncle or something?

That, and as ratbat pointed out, all he's getting is a blank slate with the same attributes anyway, not his friend...