Police Comics, that is.

We've seen the triumphant returns of many of the headliners from Quality Publishing's Police Comics: Plastic Man, Phantom Lady, the (new) Human Bomb, Manhunter, and Firebrand. So I say we need to see them ALL back. Like me, I'm certain you ache for the return of...

Just your average non-mild-mannered journalist who kisses Moravian princesses after rescuing them from Nazis. 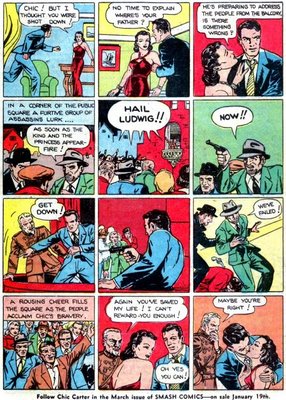 He was sort of the Anderson Cooper of his day (except, of course, for the princesses part; King Ludwig, however, might find himself with a new queen on his hands).

Apparently, the editors thought he wasn't interesting enough to readers, so after a while they gave him a secret identity as -- wait for it -- The Sword. Imagine thinking you can "fix" a nice steady character like Chic by shoving a sword in his hand. Ha! Only in the naive Golden Age!

Kindly District Attorney Dan Dyce switches places with his lookalike best friend (a convinct who gets killed while going to be with his wife as she gives birth), and decides to abandon his life and identity as a DA, so he can remain in prison (*snort*), leaving only at night through a secret tunnel so he can fight crime as "711" (his convict number) leaving his calling card of a hand mirror with bars painted on it. ... See? I've discovered a comic book I want Grant Morrison to write.

Another member of the Secret Society of District Attorneys For Whom Fighting Crime is Both Vocation and Avocation. Thanks to comic books, I grew up thinking the most exciting job in the world was District Attorney... .

District Attorney Bill Perkins was quite a man. Except for his domino mask, he wore exactly the same thing as the Mouthpiece that he wore as DA; take that, Kent. He also changed ties for each story; my hero! Oh, and the utterly ruthless Mouthpiece did not do things by halves: upon discovering that a man is smuggling illegal aliens into the country, the Mouthpiece unceremoniously spears him with a harpoon gun. Now that would enliven the Letters to the Editors column.


Oh, and some guy named "The Spirit"; looks like he was pretty generic, so I can't imagine there'd be any interest in bringing him back.
Posted by Scipio at 6:21 AM

Chic Carter's grandson, Chic Carter III, was shown to be working at the Daily Star, as his grandpappy did, in POWER COMPANY #6.

No sign that he has a swordmightier than his pen, though. At least not so far.

He stays in prison so he can leave at night to fight crime.

Just trying to make sense of that makes my head hurt. Still, I must know more. Curse you Scipio!

Where have you read these obscure characters? Has DC reprinted their stories?

Methane; 711 actually died in his final story (his fifteenth). Will you start the drumbeat for

So the imprisoned hero's name would be pronounced "seven-eleven"?

Yo, maybe it takes a lot of also-runs to fill the gaps left by GA-Batman and Supes. Why not Eagle Evans? Or Steele Kerrigan? Dick Mace?

And that's just from Police Comics, plainclothes division. What about the more than obscure costumed characters from waaaaaay back when?

Or even some of the villains? Anarcho, America-Smasher or the Black Flamingo? (Old Fawcett villains...) Also the Death Battalion, Dr. Eternity or Dr. Hex? C'mon... Dr. Hex, you can do anything if you're named Dr. Hex!

I will start the drumbeat for 7-11. Even without Grant Morrison. (I draw the line at Johns, but I will accept Brubaker.)

In a world where "Prison Break" gets a second season, you think no one at DC isn't at least having the thought cross their mind? (Admitting it in public, yeah, I can't see that happening...)

Maybe #711 has to go back to jail because he respects the argument of the Laws in the Crito: you should obey even unjust Laws or nobody would respect justice.

Or maybe he is just insane and has a jailhouse fetish.

Borges had a better character: Isidro Parodi, who solved crimes WITHOUT leaving his cell at all.

"Chic Carter's grandson, Chic Carter III, was shown to be working at the Daily Star, as his grandpappy did, in POWER COMPANY #6."

Y'know, A lot of people didn't like Power Company, but I think this sort of thing is why I loved it.

The Chic Carter story inspires in me the plot for a great future story. Picture it: Vibe meets The Prisoner of Zenda! Ruritanian politics and dynastic struggles meet an ice-cold breaker from Tha 3-1-3.

"Why, American, you look just like Crown Prince Ruprecht!"

Somebody get me DiDio. We need to make this happen.

Why yes, I will join in drum-beating.

Hurm. Your comment on D.A. heroes reminds me that one of the books publishing Captain Marvel back in the Golden Age also had a D.A.-turned-superhero -- Mr. Scarlet. Presumably, DC now owns rights to him, too.

(Mr. Scarlet's sidekick, of course, was his youthful ward, Pinky. Whose superhero name was also Pinky. I guess Pinky wasn't too clear on the whole "secret identity" thing. He did have a really hot governess, though.)

Mouthpiece was a conscious rip-off of the Spirit.