The Widow-Maker: Handicapping the Race!

In principle, pairing a depowered Wonder Woman with a blind guy was a clever idea (not subtle, but still clever). Without her powers, Diana was, from her own perspective, handicapped. So Ching, an inscrutable blind Chinese old man of the kind so prevalent in popular entertainment, hangs out with her every waking moment, teaching her to handle her "handicap". Because it's not like he has anything else to do; blind people's only literary function is to enlighten others, you know.

In theory, the Diana/Ching team should give us more understanding and empathy for the handicapped. We identify with the "superhandicapped" Diana and she, in turn, is taught how to cope with her new limitations by a person whom we would consider handicapped. Everyone gains a new perspective.

I say, in theory. That falters a bit in practice, mostly because Diana and Ching clearly hate each other with the white-hot intensity of a thousand suns.

"Ching, are you enjoying the fashion show I've dragged you to? 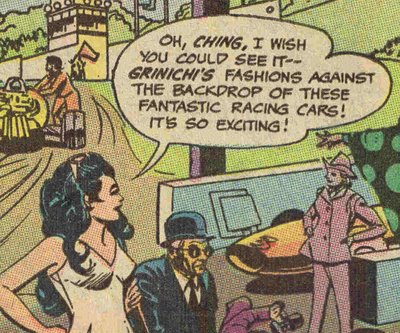 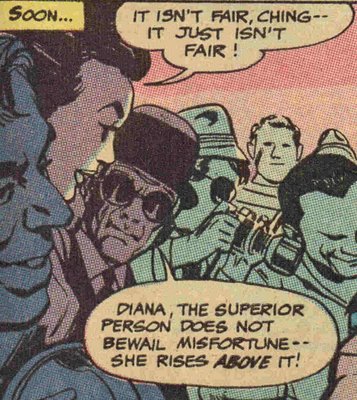 "Shut up, Diana, you bhiny witch!" 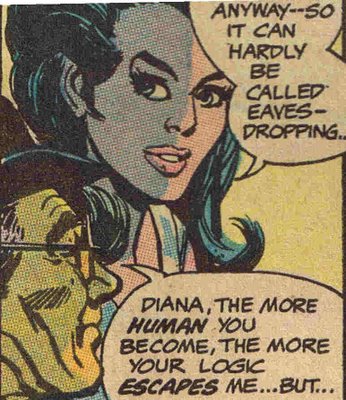 "Jeez, you're both stupid and immoral, Diana."


"You took the wrong car? What's the matter, Diana;are you blind or something?"

TWO Pikachumobiles? What are the odds? About the same, I'd say,
as being able to start a Pikachumobile without having the keys... 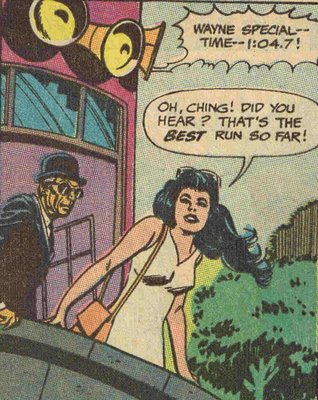 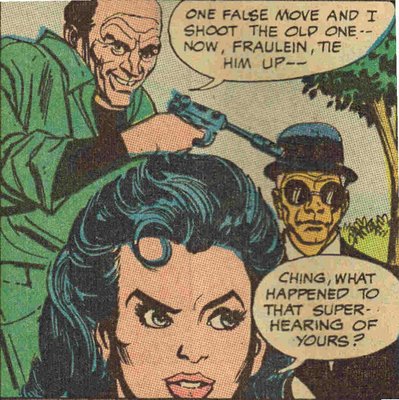 are you sure you aren't deaf, too?"

By the way, did you wonder how Diana find out about the planned sabotage of the Wayne Special? Through some more "fun with the handicapped"! She eavesdropped on a conversation between Willi Van Dort and his evil German mechanics -- who communicate only through "finger spelling" because the mechanics are deaf and mute.

There really aren't enough comics with evil German deaf-mute mechanics, in my opinion.

Anyway, when Willi talks with his mechanics, he S-P-E-L-L-S O-U-T E-A-C-H W-O-R-D. Efficient; convenient. Particularly in a leisurely sport like racing; must make for interesting pitstops. But it gets better; Diana needs Ching to translate because Willi is spelling in German, which Ching knows but she doesn't. Well, why should she? I mean, it's not like she fought Nazis in World War II or anything.

"Say, Ching, can you make out what they-- 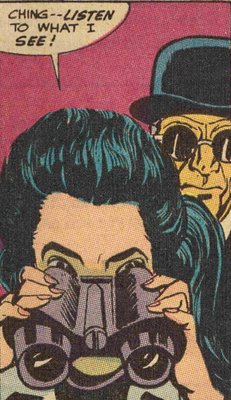 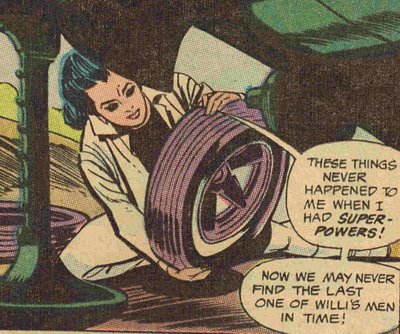 Nothing quite so gripping in an action adventure as watching the hero spell out-loud in German. Not enough of that in modern comics, I say.

So at the end of Sesamestrasse (brought to you by the Evil Deutsche Nummer Sieben), Diana finally realizes that Willi intends to kill Batman when Willi does this: 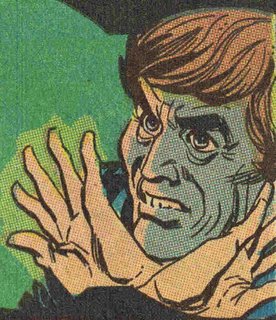 Diana is clearly better at charades than I am. Probably plays all the time at the dress shop with her supergalpals. "Oh, this is so much fun playing nude charades with Kara and Babs! Ching, don't just watch; come join us in a game! Oh, I'm sorry, Ching; I forgot... ."

Batman is not so easy to kill, by the way. Later, during the race, Willi temporary blinds Batman by flashing a light in his eyes in a dark tunnel. But the B-man grabs a telescope and uses it as blind man's cane along the tunnel wall to keep from crashing.

While. Driving. Hey, who wrote this Batman--Grant Morrison?

Curse you, Ching, you meddlesome chaperone;

I'm a better blind man than you'll ever be!

But that's okay. Ching outdoes Batman later, in one of the greatest panels you (but not Ching) will ever see: 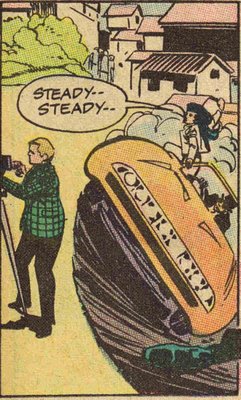 "brought to you by the Evil Deutsche Nummer Sieben"...

"Aloof Fashion Model" is much worse.

This issue is amazing!

I am *so* happy I read this before I left for work (I shouldn't've wanted to explain my reaction to my cubicle mate...)

Oh, if only I Ching could've appeared on JLU. Have Wonder Woman lose her powers for an episode and have Batman hire I Ching to tutor her.

Me thinks Mr. Sekowsky was on some heavy duty stuff when he did this issue.

Would a telescope used as a blind man's cane fall within the category of "Batman stuff?"

I mean, it's not like she fought Nazis in World War II or anything.

But she didn't! The Wonder Woman of Earth-2 fought the Nazis in WWII. The big-haired, kung-fu fighting, "Sock it to me!" Wonder Woman in this story is from Earth-1 and showed up after the war.

C'mon Scip, you of all people should have remembered that!

Okay, Scipio, this time I really was drinking (almond) milk, and sputtered it out all over my keyboard.

Your sheer talent over-awes me, Scip; you are a master of the mocking commentary. Surely that talent could lead to a paying gig at Dc somehow, though I suspect mocking DC's books at the DC offices would be counter-productive...

By the way, was it necessary for Willi to speak in rhyme? Or is that just I Ching embellishing it?

(It's actually decent German, too, though that first word bubble is kind of weird.)

So you'd think, Chance, but I have it on good authority that John Rogers got his job writing Blue Beetle by suggesting on his blog that Identity Crisis and Countdown were the result of the Silver Age violently traumatizing the DC Editorial Staff.

So, ya' know, maybe they have a sense of humor.

I think Van Dort is trying to imitate Judy Garland in "A Star Is Born" but he can't get the hands quite right. He has a great set of pipes, though. When he belted "The Man Who Got Away" it brought tears to my eyes!

how do you milk an almond?