The Widow-Maker: Meet our racers!

Ladies and gentlemen, start your engines! It's 1969, and the Wacky Races is one of the most popular cartoons on television. Let meet the stars of this episode...

In the role of Dick Dastardly 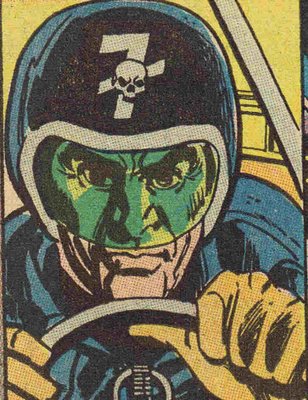 There are several subtle clues that Willi is the villain of the piece.
1. His outfit is black.
2. To match his car.
3. Which is called "the Widow-Macher".
4. "Macher"? Yup, because Willi's German; you know that before he even speaks, because his helmet's got one of those evil German sevens with the slanty line through it.
5. Upon which is superimposed a skull.
6. He is astonishingly ugly in the hatchet-faced way that only villains -- and all villains -- in the Sekowskyverse are.


In the role of Peter Perfect 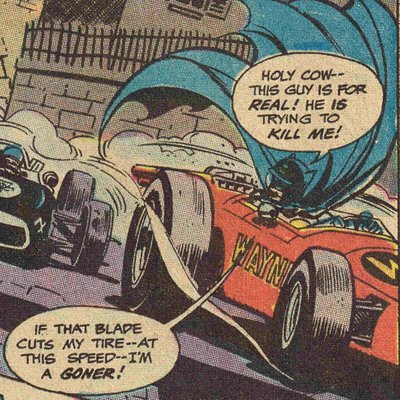 
And our heroine, in the role of Penelope Pitstop 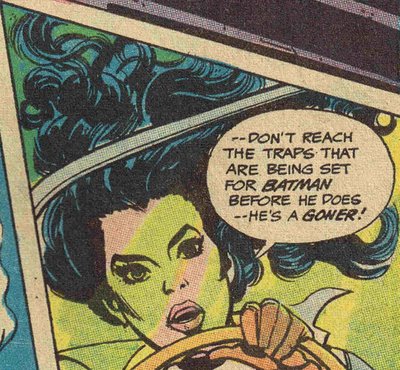 Wonder Woman, in her depowered era, dashing to the rescue of the goner-to-be, before she had time to fix her hair that morning. Now you know why she used to wear the tiara. Plus pounds and pounds of salon-quality haircare products. WW is driving, not the Compact Pussycat, but her own suped-up... 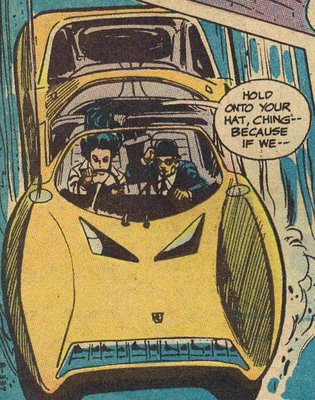 If Batman doesn't get that cape under control, he's gonna end up like Isadora Duncan.

Good thing Diana is driving the Pikachumobile. In any other car, she'd be a goner!

The Wacky Races never made sense to me. I mean, in order to set all those Rube Goldbergish traps for the other racers, Dick Dastardly had to be far out ahead of them, right? Why didn't he just forget about the giant custard pie on a trip-wire and drive, fercrissakes?? He could've won every time!!

"in order to set all those Rube Goldbergish traps for the other racers, Dick Dastardly had to be far out ahead of them, right?"

>>???
Is there any difference to those goody-good French sevens with the slanty line through it? <<

The one on the helmet looks like a neonazi Werewolf symbol disguised as a seven to get around the laws in Germany banning the display of Nazi stuff.

Why didn't he just...drive, fercrissakes?? He could've won every time!! -- Totaltoyz

What self-respecting funnybook/cartoon/etc fan asks that kind of question?

It ruins the magic, it does!