With her Chinese Vivian Vance in tow, Diana goes to stop to the evil German mechanics, only to find Bruce Wayne kicking their butts. Upon their arrival, Bruce decides to turn down the butt-kicking in order to protect his secret identity. From Wonder Woman and an old blind guy. Sigh. 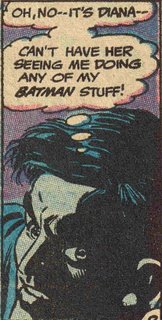 Batman ... stuff? Batman stuff? BATMAN STUFF?!
Under no circumstances should Batman ever say "Batman stuff".
Not even, "Hey, Alfred, have you seen my Batman stuff?"
Stupid Bronze Age Batman.
Diana and Ching kick some tail, and the evil German mechanics run off, but not before... 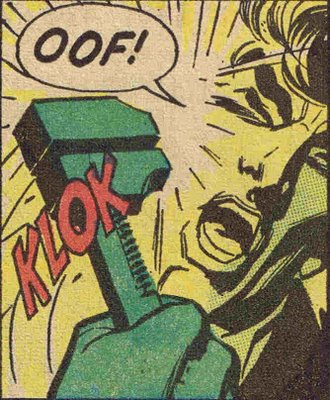 Hal? Is that you?
they klok Bruce in the noggin.

Diana and Ching rush Bruce to hospital, where doctors pronounce him unfit to drive because he's received a major Jordan upside the head, which they wrap up so excessively it makes Negative Man look like he's wearing a Snoopy band-aid. So naturally Bruce (pick one): 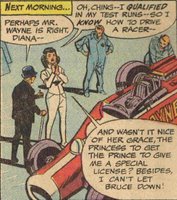 (A) Withdraws his car from the race;
(B) Arranges for forsenic tests to identify the assailants, thus disqualifying Willi;
(C) Taps a professional driver to race his car, which he should have done in the first place;
(D) Allows Wonder Woman to drive his car in the race, because Princess Grace has arranged for her to get an emergency racing license (royals stick together, apparently).

Ready? It's (E) none of the above. Gosh, you're good at this! What Bruce actually does ... well, I'll let you just see it for yourself: 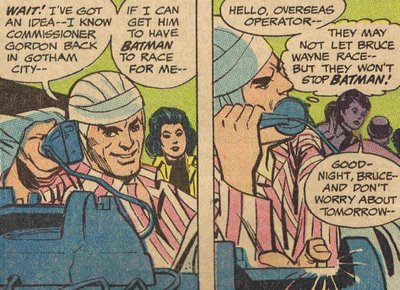 At your next geek-party, pose this question for debate:

Which is worse, Jimmy Olsen calling Superman to rid his apartment of cockroaches or Bruce Wayne calling Commissioner Gordon to have Batman fly to Monaco and drive his car in a cross-country autorace the very next day?

Then move the breakables, stand back, and enjoy the fun. It's almost as much fun as nude supergal charades; more on that later.

Miraculously, Batman does show up lickety-split to drive the Wayne Special in the race. Because it's not like he has anything better to do or took a severe blow to the head recently. Diana tries to convince Batman that Willi is dangerous and intends to kill him, but Batman dismisses her concerns like the jackass he is (and needs to be, for the plot to proceed).

"Shut up, Diana, you hysterical female...

you're a mere superpowerless woman
and I'm the goddam Batman!"

I wonder whether Batman would be so dismissive of Wonder Woman if she were still wearing her tiara and able to snap him like a twig?

(besides, she really wants to be in the race), so she and Ching dash to the Pikachumobile to follow Batman and protect him from Willi.

By the way, do you think a car like the Pikachumobile requires keys to start or does it just start automatically when you jump in and shout "I choose you!"? You think about that question; we'll come back to it later. Less importantly but more interestingly, does the horn go "beep" like a normal car or "Pikachu! Pikachu!" ? The latter, I should hope.

You may ask, why does Willi want to kill Batman? It is just because that's what evil German autoracers who drive cars named "Widow-Macher" do?

No. This time, it's personal. By an entirely unnecessary coincidence, it just so happens that Willi's father was a would-be world dictator whom Batman defeated. 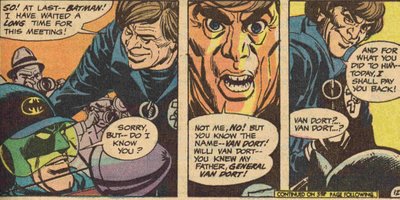 Of course, Batman defeats would-be world dictators on a weekly basis, so he doesn't remember. Still there's no reason to be so darned rude about it, Bruce...

Aren't you glad you remembered to pack it, just in case?

Never before or since has Batman exceeded this particular combination of looking like a total goober while acting like a total jackass. This panel needs to be on a tee shirt. Why do they not sell tee shirts with this kind of Batman stuff on it? Oops; I said "Batman stuff"; sorry.
Posted by Scipio at 1:41 PM

I bet he uses a rolled up tube sock to accentuate the "Batman Stuff."

Um, I'm not too confident about protocol, but isn't "Your Grace" a suitable way to address a bishop? I'm sure Princess Grace would be more at ease with "her majesty". This could be a bitchy dig at the counter jumping starlet by her diananess.

But look at what Batman is doing there! He's pretending to call the overseas operator while KEEPING HIS FINGER ON THE RECEIVER!! Batman, you genius! No one could penetrate a ruse like that!

I feel like this story must have started as a romance comic starring two people named Patty and Steve and then just been rewritten as needed.

No one told me I might one day see Batman going "Von Dort?...Von Dort...?" while wearing a helmet that Adam West's Batman would have rejected as overdone. Too fab.

You know, I'm starting to think Alex Luthor and Superboy-Prime had a point.

The Silver Age really was better.

This is NOT the Silver Age.

This is Bronze Age.

The Silver Age was cool, but the Bronze Age sucked.

It came out in '69, right? Doesn't that put it at the tail end of the Silver Age?

Nowadays, because of "Big Events", an "age" begins for every character overnight. But pre-Crisis, characters transition into a new age at slightly different times. That's one of the reasons fans argue so much about it.

It's easiest, more helpful, and most accurate if you think not in terms of exact dates, but the nature of the characters involved.

Bruce Waynes as a jetsetting millionaire playboy rather than a homebound Gotham philanthropist? Bronze Age.

Wonder Woman, powerless and in a white pantsuit, rather than in her spangled panties? Bronze Age.

Superman, by contrast, isn't clearly in his Bronze Age until 1971, when WGBS buys the Daily Planet....

At least, so sayeth the Absorbascon!

Well, this was by Mike Sekowsky, whose grasp of the mainstream DC Universe was only slightly better than Bob Haney's (whose run on Brave and Bold was interrupted by this Sekowsky fill-in). This story could have, and for all I know SHOULD have, appeared in Wonder Woman's own title, where it would have fit right in.

But that scene of Bruce Wayne faking a trans-atlantic call... I figure EITHER he was too brain-damaged from that Jordan (hee hee) to realize that nobody would be fooled by this, OR everybody knew Bruce was Batman by this point, and allowed him to think he was getting away with something.

Dang. I tell you, late silver-age comics is good fun. What does 52 have to compare with this?

It has Mr. Mind going into a cocoon.

I don't know what age that fits best in.

That Van Dort... moment reminds me of Mr. Burns' inability to remember his nemesis Homer Simpson.

That hat had me laughing til tears came to my eyes. Tears of pure nose-milk!

Anyone care to join me for the chorus from the Fall Guy? No one? Well here goes anyway:

I might slap a stupid princess,
I might roll Bruce Wayne's new car.
'Cause I'm the goddamn Batman that made Robin such a star.

I think Daniel's right: Everyone does know Bruce is Bats, and are letting him play his secret identity game. It reminds me of an episode from JLU. Pricess Diana attends a ball, Bruce Wayne asks her to dance, terrorists or Kasnians interrupt.

At the end, when the bad guys are foiled, we're treated to the following exchange:
Wonder Woman: You know, we never did get to finish our dance.
Batman: I don't know what you're talking about.
Wonder Woman: If you say so. But you're still taking me dancing.

The Pikachu (I like Pikachu. He is cute.) link is not working.