My two pennies' worth 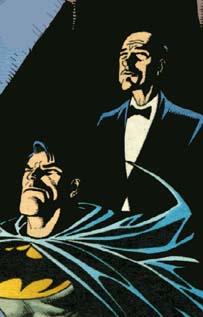 I think it's fair to say I'm not Frank Miller's biggest fan. Far from it, in fact. But one must give the devil his due.

Alfred began unspectactularly as just another Fat Funny Friend. He was well-meaning bungler, a wanna detective, and an intruder on the Wayne household.

How things change! Alfred skinnied up and grew a mustache to resemble his first movie counterpart, retconned his name from the comic "Beagle" to the dignified "Pennyworth", stopped speaking in dialect, and acquired responsibility for upkeep of the Batcave. That evolution saved Alfred from the fate of other comic relief characters of Golden Age. At some point (help me out on this one), he was retconned in as the family butler when Bruce was a boy, becoming a surrogate parent after the Waynes died.

But Alfred was still, on the whole, a colorless faithful retainer type for decades.

The Dark Knight Returns by Frank Miller is credited with revitalizing, darkening, and solidifying the Batman. Pfah. What Miller really did was revitalize, darken, and soldify Alfred. In not too many scenes, Miller created the image of acerbic, painfully dry and understated retainer that is now Alfred. So right was Miller's characterization, so desperately needed to give Alfred the larger and deeper role readers have always wanted him to have. So successful was he in doing so, that not only did every writer afterwards follow his lead, but readers began to think that Alfred was always that way.

Thank you, Frank Miller, for re-inventing Alfred as someone who could both "fight" Batman to a standstill and make Batman part of one of comics' greatest comedy duos. 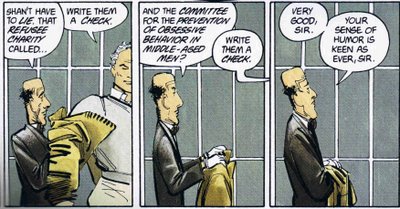 Wasn't it Year One that made Alfred a Wayne family retainer, and a lifelong caretaker to Bruce? I think that's where Alfred the Combat Medic came from, as well. I was going to disagree with you about Miller's role in recreating Alfred until I remembered that. I can't remember which '30's screwball, madcap-heiress comedy duo they remind me of here, so instead, let me just say how much I regret that PG Wodehouse never favored us with a comic book. Given his love for literary trash, it seems like something he would have enjoyed.

I also think Year One made Alfred Thomas Wayne's butler. The '80s Untold Legend Of The Batman miniseries has a scene with Robin helping a wounded Batman up the stairs from the cave, and calling Alfred for help. Thus, Alfred entered the picture after Robin (as in the Golden Age) and wasn't originally supposed to be in on the secret.

It's amazing that no one has ever taken the relaible British model of the underling who's smarter than his boss and applied it to the superhero genre -- unless you cound Chaykin's Power and Glory, and that's still only one out of how many years of superhero comics?

Here's the second: The Tick.

In a lot of comics, IMO, you do see the clever trickster servant and thick-headed boss, but the kind of clever thing they do, is they make the boss the minor character and the superhero the servant: J. Jonah Jameson is the all time champ, but Carol Ferris was one for a long time. Perry White is never portrayed as a dummy, but you get that sort of Punchinello/B'rer Rabbit vibe when he asks Clark why he's never around when Superman is on the scene, and Clark says "Sorry, Perry, guess I'm just a screw-up!" then breaks the fourth wall and winks at the audience. But I agree, that's not really a duo thing. Maybe Ronnie Raymond and Martin Stein?? Booster Gold and Skeets, now???

How can you ignore the groundbreaking work of Alan Napier?!?

Nothing against Alan Napier, but was he ever snarky to Master Bruce or Master Dick? Ever crack wise about the sanity of fighting crimes in tights? Or cuff Batman about the ears for being an ass-hat?

He pretty much perfected the voice that allows you to get away with calling the World's Greatest Detective, the Ultimate Fighting Machine, and Scariest Mother*$*er Alive (1939-present), a complete and total moron, and get away with it.

Bruce has probably had Alfred being pithy at him his entire life.

Every single thing he does ends in dry british wit.

No wonder he has issues.