The Widow-Maker; Why God Permits Evil!

During "Widow-Maker Week", you've probably been asking yourself what any decent person would: How could such a story be allowed to happen?

To examine this, let us first agree to set aside the larger question of which it is part, "Why does God permit evil?" That done, there are a few good reasons.

As previously mentioned, this comic book was written at the same time the Wacky Races cartoon was spectacularly popular. I remember; I was one of the kids watching it at the time. I had all the relevant toys, including the models. I loved the Wacky Races; most kids did. For DC not to capitalize on it for at least one issue would have been foolish.

Willi Van Dort's traps are straight out of Dick Dastardly's playbook: spikes come out of his wheels to slash Batman's tires, obstacles are dropped in Batman's path, Willi blinds Batman with a bright light, a banner is rigged to fall on the Wayne Special, and (my personal favorite) Willi actually takes a short cut to get ahead of Batman so he can emit an oil slick in his path: 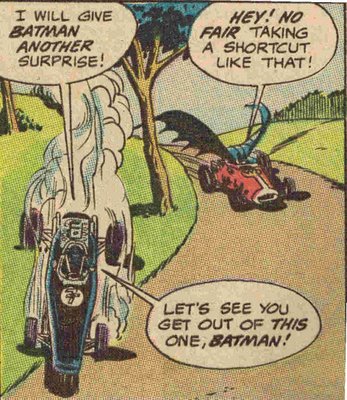 Must be all those deep breathing exercises he and Robin do.

It doesn't get more "Dick Dastardly" than that.

It all backfires, of course; the banner falls on Willi's car instead, and he dies horribly in an exploding fireball of twisted steel, melting rubber, crushed bones, and burning flesh.

Never have I found a comic book word balloon
that contained a more useful phrase than,
"Aah, a flamer! What joy that will give Willi!"
I used it three times last Saturday alone.
The second reason is the writer/artist of the issue, Mike Sekowsky of Justice League of America fame. In the lettercolumn for this issue (B&B #87), the editor explains that former Brave & Bold scribbler Neal Adams was "preoccupied with other choice DC chores" and scribe Bob "Zany" Haney was busy writing the Filmation cartoons of Aquaman et al. So they gave the book to Sekowsky.

There is a general predjudice in comics: "drawing is hard; writing is easy." That's why artists are repeatedly given things to write that they probably shouldn't. Editors think nothing of asking Phil Jimenez to write a comic book although they'd never ask Grant Morrison to draw one.

And reason three? Well, after reading this comic for the ninth time, I finally noticed the ads... 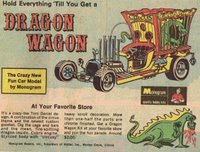 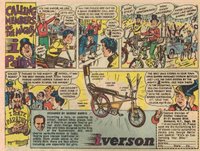 Have to wonder what Dunlop paid for that product placement. How very 21st century of them. I'm sure the marketing guy at Goodyear had his ass handed to him when his bosses realized he wouldn't pay for placement and DC ran with "Goodmay" instead, while Dunlop got prominent placement.

"Aah, a flamer! What joy that will give Willi!"

"...although they'd never ask Grant Morrison to draw one." -- Scipio


Which is a sad thing, too. I've seen a batch of his sketches, and he's got the goods.

I'm a big fan of the guy with the "I HATE PARADES" sweater in the bicycle ad. I guess he's "parade-hater-Horace".

That's a weird-looking bicycle, too; the handlebars go straight up!

"I've seen a batch of his sketches, and he's got the goods."

Preferable to Phil's writing, I'm sure!

Sal Amendola wrote and drew a great piece about being a DC staffer in the '60s & '70s. One of my favorite panels is his attempting to ink Sekowsky. He's totally flabbergasted, until another inker tells him to just follow the lines, and the picture becomes clear. One panel later, Amondela figures out he's inking a fire truck.

Maybe that's how the story got published. The editor looked at the script, said "what the-?!?" until he got to the racing scenes. "Oh! A race! Uh, okay, I guess we can go with it..."

At last, the source of McFarlane's inspiration revealed!

The photo of the genny-ine Wacky Racers car makes me feel all funny inside.

And I'm highly amused by the idea of Batman whining "No fair!" to a villain. That's the version of Batman Grant Morrison used in "Arkham Asylum": easily flustered and prone to tearful outbursts.

Aren't there health and safety issues wearing a cape in an open topped car?

I just want to know why they ask Frank Miller to do either.

That bicyle ad - the boys - the mayor! - they're the Powerpuff girls!

As I alluded to in a comment to the first post in this series, famous person (dancer?) Isadora Duncan died in the 20's when her veil/scarf thingy got wound up in the wheel of her car.

What namely you are writing is a horrible mistake.
photography classes | cars for sale in san antonio | chiropractor washington dc