Our story begins one fine day at a race track in Monaco, where we find our heroine: 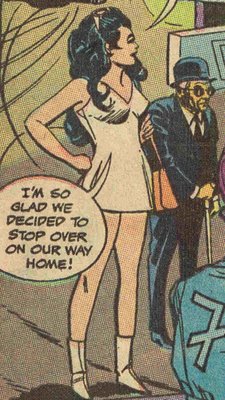 "Oh-oo, Niles, I wish Mistuh Sheffield were here fuh this!"
Okay, actually that's Diana Prince, the new original Wonder Woman, during the era when she had no superpowers and ran a dress shop in the Village, which makes it particularly ironic that she's running around in nothing but her slip and some rainboots, but would seem normal, I suppose, to some who's spent the last 30-odd years in a majorette's costume.

Her companion is "I Ching" (yes, really), yer basic inscrutable old Chinese blind master of wisdom and the martial arts. Diana and Ching have stopped off in Monaco on the way back from, um, somewhere unspecified. Why? Because there's a fashion show at the race track's garage, silly. And what fashions they are! 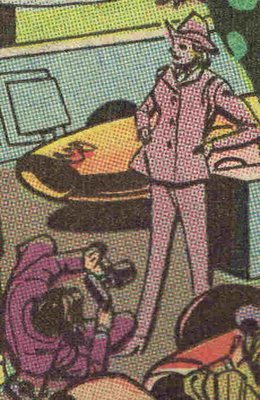 When assaulted by a rampaging model with sharp creases,
do a body-roll to absorb the impact, then remain in a posture of submission.

This outfit actually comes with red silk underwear.
But "the Watermelon Warrior Look" never caught on. 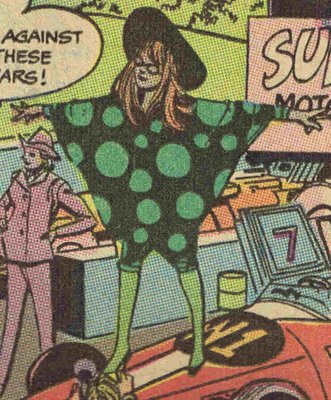 The Count's sister, Laverne Vertigo, was slated to have become
a new Green Arrow villain, the Polka Dot Squirrel,
but instead she was moved to Swing With Scooter. 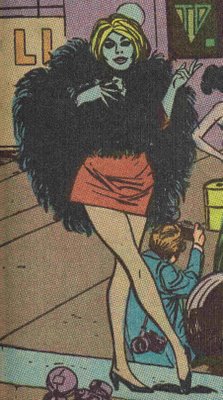 No, really; if you stand like that for a while,
you'll turn blue, too.
Oh. My. Suddenly wearing nothing but a slip seems like the least of all evils. I think the only spectator who survived this fashion show was I Ching.

Anyway, Bruce Wayne is there preparing to race his auto, the Wayne Special. I mean, it's not like he has anything else to do. So Brucie (who knows Diana is Wonder Woman ) starts hitting on Diana (who does not know Bruce is Batman) because, after all, she's "very very pretty"... and can no longer snap him like a twig if he gets fresh.
Bruce is a player. Diana is a player-hater. 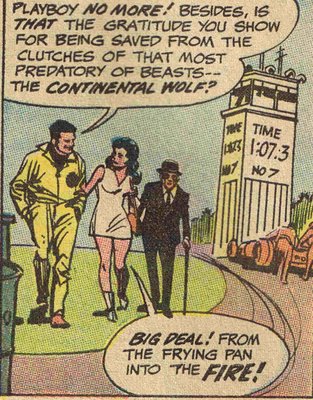 If this were Marvel, "Bruce Wayne: Playboy ... No More!",
would have been the epic saga of a guilt-ridden Bruce's impotence problem
after the death of Aunt Harriet at the hands of the Outsider.
Slightly later, Diana is snooping around unnoticed (perhaps it's an Invisible Slip?) and uncovers a plot by that Dastardly Dick, Willi Von Dort, to send his mechanics to sabotage Bruce's car later that evening. So naturally she (pick one):

(A) confronts Willi;
(B) tells Bruce;
(C) alerts the racetrack authorities;
(D) goes to the police.

If you've ever read a comic book, you probably guessed correctly that the answer is (E) none of the above. You see, this is her powerless era; and when you subtract the "Wonder" from "Wonder Woman", you are left with merely "woman", which means that the writer assumes she now has the proportionate logic of a Lucy Ricardo. 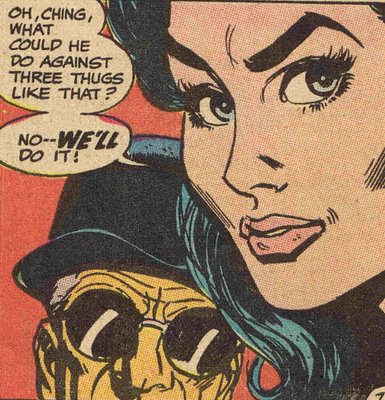 I laughed aloud at Marvel's Playboy...NO MORE! (because it's TRUE), but laughed even harder and louder at "Laverne Vertigo."

Irony, indeed! Once again Bruce's obsessive protection of THE SECRET rears up and bites him in the ass. If only DC would stop their incessant major cosmic overhauling, he might have learned his lesson by now! They're like those people with a cup of coffee at the diner. Someday, they'll get the cream and sugar PERFECT and THEN, everything they do will actually count.

BTW, I Ching looks an awful lot like Cab Calloway in The Blues Brothers. If he'd switch that bowler for a porkpie, they'd be separated at birth.

So did you know that you posted this on the day of the Monaco Grand Prix? Oh the irony! Oh the bad 60's comics!

You know what they say, Sam:

there are no coincidences.

I guess horrible chinese stereotypes were still in vogue in the late 60s....

Oh and I spat out my coke reading that "Bruce Wayne, Playboy....NO MORE!" line.

Since I seen (in real ife too!)a fashion show in a Burger King's parkinglot; one next to a race track seems quite sensible

And why is I Ching wearing a yellow mask? Is "I Ching" just his superhero identity?

Why is my Bob Haney detector going off?

Please oh please oh please tell me that by the end of this story we'll see Egg Fu drivin' a hot rod racer, popping the clutch and telling Bruce Wayne to eat his dust!

Sorry to disappoint you, X. This story is written by its artist, Mike Sekowsky, and as such is Exhibit A in my case for "Why Comic Book Artists Should Never Be Allowed to Write Comic Books".

Exhibit B is the Phil Jimenez run on "Wonder Woman".

Why, I do believe that's Quentin Crisp in that second picture.

Indeed; rumor has it that in the forthcoming "Widow-Maker" film, he will be portrayed by Sir Ian McKellan.

I can't believe Giganta and the Blue Snow Man aren't in the race.

Along with Snake Oiler and the Car Acrobatic Team!

P.S. Scip, you can see why I might have thought this was a Bob Haney story, can't you?

Here's my Bob Haney story: I was at the San Diego Comic Convention about 1997, attending a panel where the speakers were Haney, Ramona Fradon, Al Williamson, Marie Severin, George Tuska and Dick Ayers. The moderator was Mark Evanier. Somebody asked Haney what was his favorite story of all the stories he wrote. And he picked the Batman/Atom team-up in Brave and the Bold #116!

Urrk! That's the one where Batman is electrocuted on a case and the bad guys dump his barely functioning body in front of the police station and take off. Ray Palmer just happens to be visiting (lecturing on, uh, the uses of the Time Pool in crime detection? How the dwarf star can be used to, uh, sorry, I got nuthin') and he turns into the Atom and enters Batman's almost lifeless body, jogs on his heart, works his muscles and gets him up and going despite Batman's brain-dead state.

Batman's instinct leads them to the bad guys and the Atom rescues the kidnapped girl. And the Atom's movements in Batman's brain reactivates electrical brain activity or something, and Batman recovers.

That, in Bob Haney's opinion, is his best work.

Maybe it was the Aparo art.

Heh. I knew a girl in high school whose name was "I Ting." I think that's the same thing as "I Ching." So that old Chinese dude has a girl's name.

As for "continuity", well, if Bob made it through an entire story without a complete shift in weltanschaung, that was good enough for him.

I think I prefer that style of writing.

Congrats on keeping this fun little B&B story alive! It has holes in it the size of battleships, but of course those holes are only a third as large as the usual Haneyholes of B&B (and elsewhere).