What I want for Christmas from you

Okay, I put out a lot here on my blog (elsewhere, too, but that's not important right now). So now, gosh darn it, I'm asking for something in return. It's Christmas, which is not big in my family, so I won't be getting hardly any gifts (the boys have to save their money, because dance mats aren't cheap). But YOU can make up for that, by sending me any of the following things: 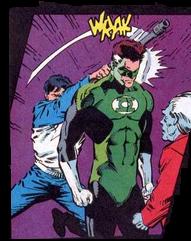 it may seem, I have only ONE issue of the Detroit League, which featured Vibe. Perhaps that's why I like him so much? Anyway, any picture of Vibe will do. If you're moved to get rid of your Detroit-era league issues of JLA, but the EPA won't let you dispose of them at any federal facilities, you can send those to me, too! You can't imagine the joy they will bring me. In fact, it's best if you don't think about it.
3. Scanned pictures of Aquaman humiliating people with fish. It will give me something to look at during the eight months of Sword of Atlantis.
Send gifts here. Thanks!
Posted by Scipio at 9:53 PM

Aquaman humiliating people with fish? That sounds like the next big Internet fetish.

Ohhhh, that Pfifer arc with the eel was full of whale goodness, and the ending was one of the best uses of sea life ever.

And you reminded me of the greatest scene from emrald dawn ever.

I shall scan away.

Hmmm...most of the Hal stuff is in Amy's collection, but I do have an issue where John Stewart fights apartheid in "South Nambia" and gets stripped and beaten up by the cops (with mysterious disappearing genital action).

Then again, I might just scan that for my own pleasure.

Scipio -- Umm... Since I'm hoping for a scanner for Christmas, I might be able to send you soemthing a little later on. I'm sure I have Hal getting bashed somewhere in my collection.

I have more than enough of him getting mind-controlled...

How about scans of Vibe knocking out Hal with one of Aquaman's yellowfin tuna?

One issue of Justice League Detroit! I thought you had them all, like I do.

I shall loan you one of the greatest collections of Hal-brr-dashery ever assembled!

What's the deal with that guy's face? Is he playing Mayor Hundred from Ex Machina?