Special thanks to "jeff r." for spotting this week's heroic haiku!

Nearly broken with disillusionment in Infinite Crisis #3 and seemingly ripe for the Original Superman's overtures of friendship, Batman, even breathless and halting in step and speech, still manages to stutter out a haiku: 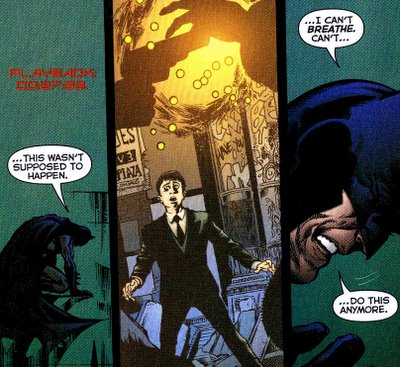 This wasn't supposed
to happen; I can't breathe. Can't...
do this anymore.


Ah, the traditional "powerlessness" speech we expect in a "Crisis". But this one, from Batman, of all people, resonates strongly. Such a statement from unbreakable Batman! And the knowledge that he's responsible for the ruination of so many lives!

But Batman does not break, and those who've read the issue get to see why not.


We've seen what kind of haiku Batman can compose under the direst pressure. What about YOU?
Posted by Scipio at 9:38 AM

Infinite Crisis
threatens to overwhelme me.
My sons keep me sane.

Panic attack now...
mask closing in on my face...
its all in my head.

Who is the Batman?
A masked nighttime avenger?
Or a proud parent?

When all hope is lost
And even the Batman falls
Vibe must save us all!

Batman forced most of
the Amazons off-planet.
Unforgivable.

This version of Bats
is absolutely a villain.
Karma will catch up.

Damned good man Devon?
Every Omac death is on
his paranoid head.

This version of Bats
is an absolute villain.
Karma will catch up.

Batman, screwed up by
legions of Frank Miller clones
Help me Geoffrey Johns!

The link doesn't seem to work. Sorry. I was doing a search for Hulk and Boomeranf on google, I heard that he was a major Hulk villain and was trying to figure out how, and came up with that.

Pearls fall to the ground
Must every Batman flashback
Rip this off from Frank?

Damn you, Brother Eye!
You force me onto my knees
And make me emote!