Whither the Metal Men? 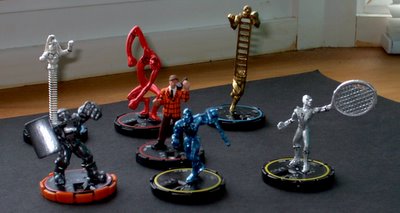 Metal Men custom Heroclix figures by Totaltoyz, available on Big Monkey Ebay.
Another wacky creation of noted madman and manbabe, Bob Kanigher. Before the Powerpuff Girls, before Terminator 3, before "Friends", there was ... The Metal Men. They had two series of their own, one of which ran seven years. 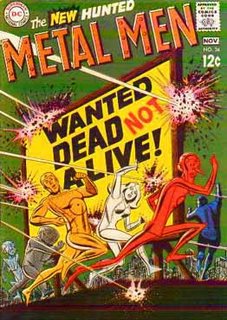 In a world, where Vibe and the Viking Prince are on TV, Catman is a threat, and Detective Chimp is back on the case, nothing short of Bat-Mite is off the table. What about the Metal Men?

What should DC do with these imaginative characters?

Should they let Morrison weirdify them? Tough call. I'm not sure even Grant Morrison could make the Metal Men weirder than they already are.

Shall Geoff Johns tie them more directly into the larger DC mythos by, say, having them be by-products of the tech that made Robotman (either the original or the more familiar one), or vice versa?

Should they be forgotten as out of place embarassments in a grown-up DCU? If the DCU has Metamorpho in it, can the Metal Men be any worse? When was they last time they were used-- was it in Byrne's Superman?

I'm really not sure what I think. What do you think?
Posted by Scipio at 9:51 AM

Bring back the Metal Men, for they are awesome! No need for a reboot or reimagining --- just keep the old origin and let those crazy amorphous robots loose!

Dude, they're in INFINITE CRISIS #2. Keep your eyes peeled. (They're not doing a hell of a lot, mind you, but they're there.)

For a while there was a series in the works, to be written by Evan Dorkin, but DC pulled the plug on it (the dopes!).

There's a Metal Men story in one of the Bizarro Comics anthologies that I think is an excellent treatment ...

I love the Metal Men. Give them Grant, Geoff or Kyle Baker if you have to, but get them a writer who actually likes them. I personally would like to see a serious take on them as aren't they all human mind patterns in robots? It would be neat to see some of them enjoy your new forms while others go the pathos route.

And lest we forget, the Dorkin Metal Men series was to be drawn by Mike Allred. Phooey on DC for stupidly cancelling the project. They should release that and the Teen Titans Swinging Elseworlds Special by Haney and Allred, and polybag each issue with a $50 bill as an apology to readers.

I hated that 90s series that "revealed" that the Metal Men were actually real people whose minds were transferred into the bodies of robots, and then Doc Magnus "became" a robot himself. Thoroughly urinates on the entire Silver-Age history of these characters. Bah.

I've never encountered anyone who liked that mini series. Luckily, it seems to be out of conitnuity, as Gold (who was destroyed) keeps showing up.

All I gotta say is Bring'em back.

One cute bit about that mini was that Gold turned out to be Doc Magnus' brother, Michael. I always thought that was an "in-joke" on the part of DC staff.

I want Platinum to get her own Birds of Prey meets Young Justice style series co-starring a new Element Girl, also featuring Cissie King-Jones (but not as Arrowette) and Geoforce. They will have hijinks. Maybe pencilled by Amanda Conner. (This is my standard "so if DC actually hired you, what would you write about?" answer as well. Because I freaking love the Metal Men, but I want Platinum to get out more.)

nothing short of Bat-Mite is off the table.

And even Bat-Mite doesn't seem that impossible, given the weirdly realistic treatment that Mr. Mxyzptlk just got.

Speaking of Mxy I actually read and enjoyed Adventures of Superman. First time that ever happened...

Since people are complaining that the DCU has become too dark, the Metal Men would be a great way to lighten up the place.

And even though I personally don't think that things have gotten too dark, I'd still love to see the Metal Men in a series. Who doesn't like robots?

Dear god, Dorkin/Allred Metal Men... that would be a masterwork. What idiot pulled the plug on that one?

The clowns behind the 90s series (I forget who they were, now) who decided they weren't robots at all, but people in metal bodies.

That '90s "they're really human" idea is in the "No Longer Operative" file now, right? I hope?

Seriously, it's hard to imagine a worse, more wrongheaded, idea for these characters, unless it's making Doc Magnus a Metal Man himself, which IIRC they also did in that series.

It gives them pathos the characters don't need or want, not to mention taking something like Platinum's crush on the Doc and changing it from something cute and funny to something seriously creepy and weird, and not in a good way.