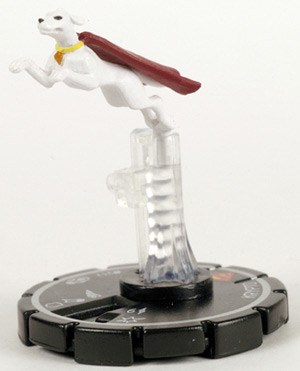 A higher number is better in Heroclics right?

Basically. The higher the point value the more power the figure, in principle.

More subjective but of greater interest to players is the figure's "playability": how good it is for the points it cost.

You could have a very "playable" figure of around 100 points, or a really crappy one (the original Lex Luthor Unique, for example).

While many/most of the Superman Ally heroclix are more points than the K-Dog, players are excited because he seems very playable.

Playable or not, I must have him!

Have I died and gone to Heaven? A Krypto-Clix? Can the Legion of Superpets be far behind?

I was all excited when I read this, but then I saw he's just available as a Buy By The Brick extra enticement.
That's dirty pool, Wizkids.

Also - why aren't there Krypto, Ace, and Streaky plushies based off the TV series?

He just looks so cool. Why can't the animated Krypto look this good.

I was all excited when I read this, but then I saw he's just available as a Buy By The Brick extra enticement.

I'm sure he'll eventually show up on eBay. The grey Iron Man, too.

By brick do they mean an entire case? Because that'd just be lame.

I think the ClikBrick is something in the region of a display, or half a display. Either way, it's keeping the little guy down, and that sort of thing is plain not cool.

Plus, it really cheeses Green Arrow off.

" Either way, it's keeping the little guy down, and that sort of thing is plain not cool."

Only bricks bought at brick and mortar stores (like a comic or game shop) count. In the past it has been easier to buy clix on-line than at a store. As a result, stores don't push the game and overall sales fall.

The brick program (along with others) is designed to refocus purchases through comic and game stores, whose apostatic evangelism is necessary for the game to thrive.

It is exactly the opposite of keeping the little guy down.

I found a great deal of effective data in this post!
popcorn ceiling removal | hotels in indianapolis | how much is attorney malpractice insurance

This can't succeed in reality, that is what I think.
Toronto homes | Lyme disease pictures | vacation rentals by owner