A Haiku for Mxyzptlk

Some people just can't help being heroic, Superman chief among them.

Even in his Clark Kent identity, the Big S can't stop helping people and changing their lives for the better... 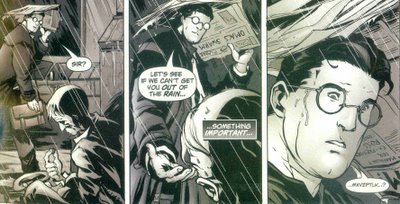 Sir? Let's see if we
can't get you out of the rain.
Mxyzptlk?


Now, to make this work Clark has to use the lower-class five-syllable pronunciation of Mxyzptlk rather than the classier four-syllable version, but, hey, that's just the kind of sacrifice a hero makes.

Very impressive, even for a superman. It's not fer nothing that Clark Kent is a writer.

It's raining, you're headed into work without an umbrella, and suddenly you spy your extra-dimensional nemesis, addled and begging for quarters while propped up against a dumpster. Do you manage to compose a haiku?

Dark stormy shower
Not fit for man, beast or imp
Today we are friends

This never happens
To Bat-Mite, his mom makes him
take an umbrella.

Oh! Hello, it's...you.
I would help you out but I
can't pronounce your name.

That pesky old imp
Looks like he's down on his luck.
Buy a vowel, dude!

And Batman says Clark doesn't inspire people. As if he doesn't have enough responsibility on his shoulders, here he is, helping someone who's down on his luck. Not tossing him cash and walking on, but stopping and treating with respect. Like a human being. Clark makes me feel like a jerk.


[A little Foreshadowing Haiku from the same book...]

Poor imp. You need help?
I could, but nothing's free, chump.
Gimme some wishes!

Of course there is.

Mxyzptlk himself pronounces it out using a rebus on Superman the Animated Series.

Scipio (and animated Mxy) are correct. The four-syllable version is both confirmed and classy. And the three-syllable "Mix-ul-plick" from the mid-80s "Super Powers" cartoon is right out.

But this panel is
Not "Animated Series",
It is the comic.

Not "Mix-yiz-pit-lick" -
That's from Animated Earth,
Not our DCU.

Bob the Answer Man
Said it's "Mix-yez-PIT-el-ick",
Good enough for me!

I realize that making sense of the pronunciation of a name that consists entirely of consonants is dodgy, but even within that dicey realm I'm loathe to make the single letter "l" an entire syllable unto itself.

Mxyzptlk?
Is that Mxyzptlk?
Mxyzptlk!

Goodness, there is really much worthwhile data in this post!
limos in san antonio | black diamond earrings for men | 14k gold chain