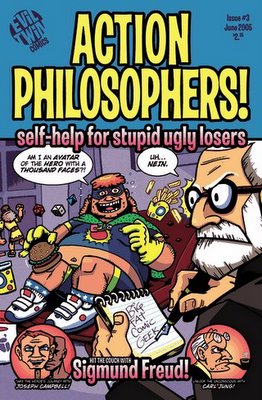 Why on earth are you not reading Action Philosophers?

Do you think you're too smart to learn anything about philosophy from a mere comic book? That's what I thought, because I'm an overeducated jackass.

But I was wrong. Very wrong. I've read each issue so far and learned something from each, particularly about how philosophers' personal experiences and their own studies of other people's philosophies helped them develop their own.

Or, are you not reading it because you have no interest in "boring dry philosophy hoo-hah"? Then this book is for you; there's a reason everyone on the internet is raving about how it makes philosophy entertaining, comprehensible, and relevant.

Here's a thought that occurred to me when reading the latest issue, "Self Help for Stupid Ugly Losers", which explains the relationship between Freud, Jung, Campbell ... and their philosophies:

At heart, Marvel comics are Freudian, helping us make the transition out of childhood and working out childhood issues. Guess that's why their characters are childish and neurotic...!

DC comics are essentially Jungian, drawing on the imagery of the collective conscious to help people confront the issues of adulthood and old age. That's why its characters are less "human" and highly concern with issues of legacy and tradition.

As one of MY favorite philosophers is fond of saying:

Although I usually associate Freud and Jung with psychology, not philosophy.

Existentialist superheroes -- now that I would read.

Or maybe I already do.

I can't say enough nice things about this series--it's probably my in my top ten favorites of 2005, and I'm happy to see other people like it.

I freakin' love Action Philosophers. I really wish the issues would come out more frequently, though I am happy that they rereleased the first one when the third came out recently. Easily one of the most entertaining comics on the shelves.

I'm anxiously awaiting their issue on the Pre-Socratics, who are funny to begin with.

"Although I usually associate Freud and Jung with psychology, not philosophy."

There's a school of thought that suggests that psychology is basically applied philosophy. "The point of psychoanalysis," I read once in a Jonathan Lear book, "is to help us develop a clearer, yet more flexible and creative, sense of what our ends might be." Which is pretty much what philosophy aims to do, too.

Reminds me of a bit from What If? #34 (the all-humor issue), Spidey Intellectual Stories.

I see my attempt to incite discussion by snarking on Marvel has been ignored!

Where has all the fanboy rampage gone?

I suppose anyone who's going to take umbrage at my statemtent, no longer reads the Absorbascon....!

"How dare you insinuate that Marvel comics are the more childish, lesser comics than those of DC! Have you no decency, devil-spawn? Has suckling at the poisoned teat of Dan DiDio at last destroyed your capacity to reason? Would surgery expose the tiny footprints of Geoff Johns in your brain? Etc., etc."

I miss The Rampage.

In broad strokes, I'd say your Freud/Jung-Marvel/DC split basically right, though I don't know that I'd swallow the inferred age differential. Based on my limited knowledge of the work of both men, I'd think you could apply Jung to the young and Freud to the old without violence to their theories. I dunno.

Though I will say with confidence that Joseph Campbell, with whom I have much more experience, is a weiner. Just puttin' that out there.

A theory that can be stretched to cover any story is a useless theory. If an archetype encompasses everything, it means nothing.

"The Hero With a Thousand Faces" is malarkey, a grasp for profundity that ends up saying nothing of value.

Now that will start a Fanboy Rampage...

Batman is about as Freudian as you get in terms of superheroes. For Christ's sake, he dresses up as the animal his dad rescued him from as a child in order to avenge the murders of/live up to the legacy of his dead parents. Thor and Captain America, meanwhile, are both pretty Jungian. One runs around dressed up as a symbol and the other is a Norse freaking god.

But by all means, don't let me interrupt the usual "DC roolz, Marvel droolz!" fest.

No, DC Comics are childish icons of identification with the Parent figure (Hippolyta/Jor-El), they are repressed Oedipus.

Marvel Comics are adolescent fantasies of Oedipian regression and the neuroses of guilt.

They are both warped, but in different ways.