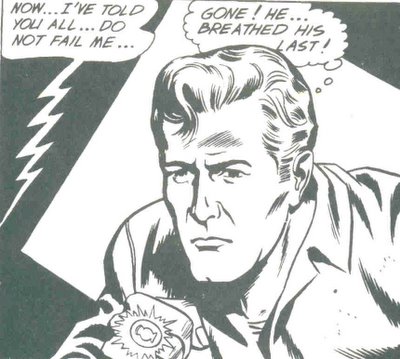 "Emerald Candidate",
in which George W. Bush receives the ring of power from his fading predecessor.
Posted by Scipio at 9:55 PM

Goofy bumps on the head? No problem.
Noting the fact that he can't keep it in his pants? Admittedly true.
A couple of bong hits with the GLC? Actually, that's pretty hilarious.

But you do not spoil one of the coolest damn origin scenes in comics with that name, sir. I will not stand for it.

Umm... The resemblance is remarkable, actually. But didn't Hal serve in the war?

Isn't the power ring supposed to go to someone "utterly honest and born without fear"?

But didn't Hal serve in the war?

If you subscribe to Emerald Dawn continuity, yes. Geoff Johns has kind of glossed over that to make Hal younger, so now he's more of an AFROTC graduate.

I like him much better as the Vietnam vet, personally.

amy -- He could still be. He's a green Lantern, they only have to age if they want to!

As long as you can willfully ignore lines like "he went gray so early," which I certainly do. I miss my gray-templed Hal... he was so much more capable than this nervous-looking rookie here.

amy -- No one ever drew the gray right, so I'm glad it's gone. I like my superheroes with a bit of male beauty in them, myself.

Also, he did go gray overnight between Action Comics Weekly and Volume 3. That's premature, even if you are of age.

Who says gray isn't beautiful? I think the gray temples were hot.

And I think it was meant to coincide with Emerald Dawn, which put Hal in the right generation to have served in the Vietnam War (which made him, oh, 40ish in 1990). It's a lot like what Mike Grell did with Ollie during his run on the first Green Arrow monthly, although Ollie didn't show his age so obviously.

But yes, the size and thickness of the gray varied with nearly every issue (and certainly every colorist). There should be a style guide for the DCU, particularly for characters who make appearances in several books.