This is not a story I am able to tell in person without breaking down and crying, so I will tell it to you here.

On Christmas Day some years ago, I left the house for the first time in about five or six weeks. My jaws had been broken in four places, and the surgeons had inserted a plate in my mouth and wired it shut to hold everything in place so that the bones could knit. For over a month I was at home, unable to speak, drugged senseless, awake long enough only to drink through a straw shoved behind my teeth and to use the restroom. I had lost nearly 20 pounds. Except for someone who came to look in on me every few days, I was alone and in nearly constant pain.

On Christmas Day, however, someone came to take me out. It had started snowing that morning, hard, and no one was traveling anywhere who didn't have to. I did.

My companion drove me through the worsening storm to an obscure and downtrodden cinema on the northside of town, where it seemed there was but one employee to handle tickets, concessions, and the projector on Christmas Day. I was helped to my seat and given a Coke, and I almost cried from frustration when it took more effort to drink it than I could muster.

The cinema was almost empty, with no more than 8 or 10 people attending the opening of the film, which wasn't showing anywhere else in town.

But I was there. I got to see Batman: Mask of the Phantasm when it opened that Christmas Day. 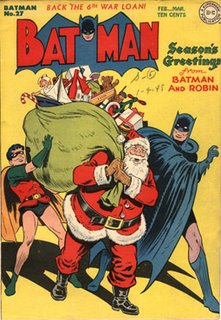 I was still alive.
The snow was pretty.
The movie was wonderful.
And I had never been happier in all my life.

I finally learned that day that it is the simple things in life that really make us happy.


Merry Christmas to you all.
Posted by Scipio at 1:05 AM

Fantastic story. Thanks for sharing.

I saw the flick on opening day, too. Best Batman film EVER.

Thanks for brightening my days, as The Absorbascon is my favorite blog.

Wow. Powerful stuff that only happen in REAL life.

Have a good one, buddy.

What a wonderful post - and perfectly positioned in the theme of holiday issues, when comics often try to say something a little bit deeper than their usual diverting fare.

That brought a tear to my eye, Scipio. Pretty awesome.

And I saw Batman:Mask of the Phantasm on opening day, by myself, as well. It is so much better than any of the Keaton/Kilmer/Clooney Batman movies. (Not as good as the Adam West movie though.)

Sorry I broke your jaw.

P.S. Honestly, thanks for making life better just by being.

Sweet lord a'mighty! I'm a newcomer to your blog - and reading the whole damned thing obsessively - and this little entry brought me and my SO to tears. I love you, Scipio! Merry Christmas (even though it's July!).