Hal's Head versus the Fifth Estate

Hal's head, the symbol of post WWII man, is so rich in symbolism that, well, it practically spews forth symbolic power from its every opening. It is, for the post-war comic book reader, the veritable Fountainhead of Meaning. Why, just take these panels below as another example.

Hal Jordan, the conservative post-war man decked out in jacket and tie, is joy-riding in his impratical gas-guzzling convertible, accompanied by his attractive boss/ lover/ alien-mind-controlled, dominatrix-style arch-enemy, when "suddenly".... 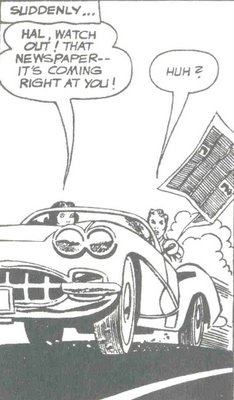 Carol "Eagle-Eyed Capitalist" Ferris, ever alert for threats to her property (Hal Jordan included), warns of an approaching attack by the insidious liberal institution of the Fifth Estate! Carol's no fool; she knows that any free and random object with 20 feet is just itching to whack Hal Jordan in the head.

Hal, his intellect stultified by years of driving the Hurtling Steel Box of Doom that is industrialized society, responds as any late 1950s conservative company man would from this unexpected attack from a newspaper on the far left: "Huh?" God bless you, Hal.


"You do not understand that you are hurtling too fast along a lifepath with sudden twists and turns," the paper tries to symbolically convey to Hal. "Seduced by your jeweled rings of power, you and your companion's mindless embrace of materialism have rendered you faceless and blind. Why, there might be thousands of others like you wasting their abilities in thoughtless toil and obedience to distant and uncaring masters... and you'd never even know it! It's all right here; for god's sake, read between the lines!" 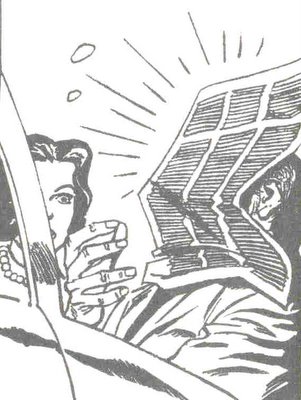 I'm sure, if we could see the paper better, we'd note that, in classic comic book irony, it was called The Guardian.

The paper tries to thrust its unwanted truths into Hal's face, but (oh the comic book irony!), Hal is too close to the truth to see it. "Ring--useless! Must be ... YELLOW JOURNALISM!" Hal thinks only of protecting the status quo: "The Lover/Possessor of Capital! The Car/Icon of Postwar Mobility and Freedom! Myself / Symbol of the New Suburban Man! I must save them all!"

But is Hal equal to the emergency? 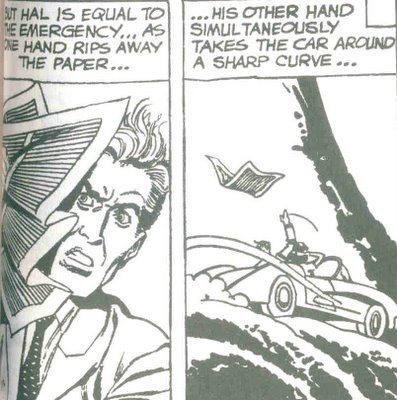 Oh, thank goodness. Fearless test pilot Hal Jordan was able to handle a piece of errant paper. As Hector Hammond once said, "Oh, Hal Jordan ... my hero." Let's all be thankful there aren't many topless jets for Hal to fly, otherwise Coast City would have been destroyed years ago. Of course, it was anyway, when Hal was off selling toys or something, but that's another story.

Anyway, the moral is clear: driving the modern industrial society forward is a two-fisted affair, and you (like Hal) must be ready to both dismiss distracting attacks from foolishly idealistic journalists while boldly piloting on an unpredictable path with an immovable car-crushing mountain of economic necessity on one side and a constant precipice of ideological error on the other. Like Hal, you must stick to the path!

I read this story a few days ago. Hal doesb;t know he is a metaphor for the post-war man, he thinks he is under a curse. Sure, Hal...

Scipio, you're corrupting me. I'm starting to see it.

Not to be picky or anything, but I’m pretty sure that the press is the “fourth estate.”

Ah, someone finally caught that...


You see, when it saps on precious bodily fluids in collaboration with the FIFTH COLUMNISTS who write for it, it becomes the FIFTH ESTATE!

DECENT journalism is the Fourth Estate.

Thankyouverymuch master Scipio for the clarification. All is right with the world again.