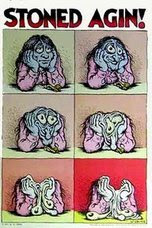 Awww. I like the four contradictory origins in that one issue of Secret Origins.

The correct origin is clearly the one where he's a mortal who is promoted to supernatural status for daring to debate morality with an angel and winning. None of the other potential origins manage to capture his essential awesomeness.

Where was that one? It's not one of the four, as i recall...

The face melting schtick may be good for getting the hippy chicks, but I don't know how good it would be at keeping them.

I suppose that's moot because he's got a whole cache of groovy lingo to keep 'em hooked.

The one where the mortal pre-Phantom Stranger debates the angel is the one with the Sodom / Gomorrah town and he's the only man still faithful to JHVH. The angel offers to take him to safety, but he refuses to leave, and insists that it is better for evil to be turned to good even if it takes until the end of time. And the angel didn't have a counter-argument, only the insistence that God's patience was at an end.

Man, I don't swing that way, but the Phantom Stranger is enough to make me consider changing teams.

Wow. I think that version of his origin is the closest to capturing The Essence of Total Awesometude that radiates from the Spooky Fedora. It should be declared canon. In my silly opinion, anyway.