Super-Heroes I'm Mildly Embarrassed to Have the Hots For

Okay, I'll confess: I never read his comic. In fact, I think the only stories I ever saw him in were Zero Hour/crossovery kind of stuff. I'm embarrassed to have the hots for him mostly because everyone thinks he's a screw-up and his recent behavior has been un-heroically temperamental. But that doesn't stop me from having the hots for...


First off; he's short. I like guys shorter than I, and since I'm only 5'7", that's a limited field. Most people in comics are not short. In fact, they are egregiously not-short. For example, I've noticed that one of the unique characteristics of the Justice Leaguers is that they are not only taller than regular people, they are each and every one of them taller than all the other Justice Leaguers. Superheroes, you see, transcend mere mathematics and topology and if you don't believe that, just go take a look at some old Sekowsky JLA art. Anyway, Grant Emerson is my shorty.

He's young beefcake, by drawing, portrayal, and characterization. Just take a look at this example, stolen generously from the bravely unashamed Shirtless Superheroes site. I mean, really. I don't know whether the writer was in on it, but the artists certain took advantage of Grant's hunkiosity. 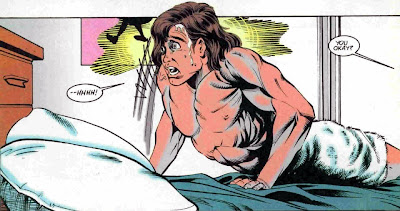 Sometimes it doesn't hurt until later, you know.

Don't worry; I'm sure that the person saying "You okay?" is a safe, non-sexually-tensive supporting player, like an elderly female relative. I mean, it's not like it's some hunky young guy in skin-tight clothes, the kind who dances at clubs with his arms in the air. 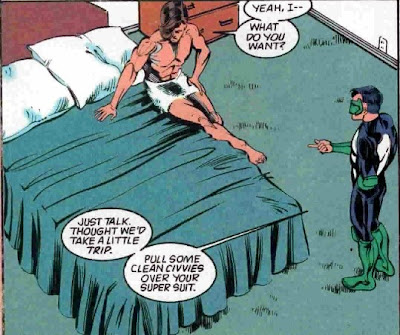 Anyway, young buck that he is, Damage is brimming over with (highly suggestively symbolic) explosive power. Just thinking about it makes me reach for a limonada. I mean, really: "banging" is his power. What more could one want in a man? Or, for that matter, in oneself?

Email ThisBlogThis!Share to TwitterShare to FacebookShare to Pinterest
Labels: SHIMETHTHF

Kyle. It WOULD be Kyle. But yes, young Damage DOES clean up rather nicely there.

Of course, current JSA artists are forgetting about Grant's size, and insist on making him Atom Smasher size ( one of the tallest characters in the DC universe, btw ).

And since we are taking about shame...well, Atom Smasher/Nuklon/Al Rhothstein is mine. With the mohawk. Or the mullet. Or the full face mask ( hubba hubba! that brings out the fetishist in me BADLY )

As height goes I think Grant was on the short side (taking after his Dad). I'd say 5 something. But I know when Grant powered up he grew in height. Power up so many times I guess you just stay as tall as Atom-Smasher.

BTW, Grant is looking quite like Atom-Smasher light these days. I had a "costume design" I thought of a while back with a story that had him take on the name of The Atom. Ray Palmer would take him under his wing as an apprentice and help him control his exploding abilities with a good ol' atom belt. Plus giving him size changing abilities. Of course this idea came prior to Identity Crisis, Ryan Choi and the new JSA series. Looking back the costume is very Jack Knightish but it was serving the purpose of differentiating him from other the other Atoms and getting him out of that half spandex/half civilian clothes outfit. Anyway here it is for your viewing pleasure.

Damage's eponymous series back in the early nineties had some good stuff going for it. It never quite worked, but it came close. The series is worth a read just to see how they monkeyed a bit with superhero conventions.

Man, I want my super-power to be "super-banging." I like to pretend it already is, but. well, um, hey.