You Can Run, But You Can't Hide

Flashophiles, I have not forgotten you. Either of you.

I kid! The Flash has lots of fans ... particularly among Heroclix players.

In Heroclix, Flash and Flash Family figures generally have HSS (that's "Hypersonic Speed", for the uninitiate) or a related special power. Basically, it's the ability to run up to an opposing figure, hit it, then run away, all in one turn. Wheeee! Many (most, really) other figures need to move into range of an opponent on one turn, rest on the next, then attack on the third. Thus, a figure with HSS can do in the time of one turn what it normally takes other figures three turns to do. During gameplay, that certainly gives HSS figures the feel of being superfast.

"Speed" in Heroclix is defined as how many squares a figure is allowed to move in one turn. Most regular figures have a speed in the 7-9 range; superfast characters have speeds more in the 11-14 range. There is only ONE figure that has a speed higher than 14: Jay Garrick, from the original set of DC Heroclix, with his speed of 20. The difference between the speed of a regular character and a superfast character may not seem that huge, but when combined with HSS, it makes a difference, trust me.

The bane of HSS (and related special powers) is hindering terrain. Hindering terrain represents stuff that doesn't completely block your path, but is enough of hindrance to slow you down or mess with your aim: bushes, furniture, rubble, that sort of thing. Unless a figure has particular powers (such as Flying or Leap/Climb), it has to stop when it enters hindering terrain; when it moves from or within hindering terrain, its speed is halved.

The other thing about hindering terrain is that it creates dark areas for lurking, so that figures with Stealth or Stealth-like powers can hide in it, where, being unseen, they remain safe from long-ranged attacks. Now, this doesn't affect Flash figures directly, because they can't make ranged attacks anyway. Besides, they can just run up, smash a stealthed figure in the face, then run away.

I wanted to make a map for Flash-y figures, one with no hindering terrain to slow them down or for stealthers to hide in. Thus, I have created the sunny Central City Heroclix Map, where "you can run, but you can't hide!"

So, we all know what Central City is like: comedically, absurdly vast. It's also in state of perpetual sunny but not hot afternoon in later summer. Gotham has more night than day, and Metropolis has more day than night, but each seems to enjoy all four seasons. I can remember stories in each city where it was snowy and cold and others where there was a heat wave. But in Central City, it always seems to be a sunny but not hot afternoon in later summer. Long shadows; ice cream vendors; good weather for a run.

How to represent such a place on a Heroclix map? Well, one square on a Heroclix map represents about 6 to 8 feet across. That means a large 3' x 3' map would represent roughly an area anywhere from 21,000 to 37,000 square feet, which I figure is about the size of the lab in the back of Barry Allen's apartment or Iris West's living room. But I decided to represent a small segment of a Central City block instead.

Welcome to Central City, Home of the Flash! 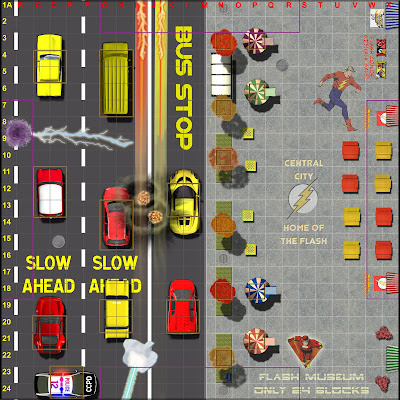 Note that the street has at least six lanes of traffic (since three are visible and there's no median). Any place else that would constitute a major thoroughfare. But this is Central City, home of the horizon, which means this must be a quiet little sidestreet. Perhaps even an unnamed alley.

I tried to show the ridiculous size of the sidewalks, but, really, based on pictures like this, I don't think I've done them justice. Perhaps the entire map should have been sidewalk!

Although there is no hindering terrain, there is blocking terrain (that means figures can't move or fire through it). Scattered blocking terrain is good for HSS figures; they can run behind it to prevent opponents from attacking them at range, and rest up for their next HSS hit-and-run. The carriages of the cars, the trees, and the street vendor tents are all blocking terrain; the back of the bus-stop is a wall (which functions the same way). Oh, and, no, the traffic isn't moving; the police car is there to indicate that it's been stopped as a result of some supervillain melee.

Note that not every part of the vehicles is blocking terrain. After all, it's not really that hard to fire over the hood of a car (or, for that matter, to climb over it)! Don't be deceived by the convertible; it counts as clear terrain. The right third of the map is almost all clear terrain, for, although it has some decorative features, such as the picnic tables, they are sufficiently circumnavigable so as not to constitute hindering or blocking terrain. Across from some outdoor chess tables (for speed chess, natch) is the Flasheteria, a fast food joint for the tourist crowd. Courtesy of a local street artist, there's a little chalk drawing of the Flash outside the Big Monkey store, and at the other end of the sidewalk is a men's tailoring shop of some renown.

Oh, and that "Home of the Flash" street engraving? There's one on every block. It's not as excessive as it seems; after all, that's only one per mile!

For a bit of local color (but not affecting gameplay) I've draw the scene in the midst of a battle where a small cadre of Rogues are trying to kill Flash and Kid Flash. In other words, just your average late summer day in Central City!

That was why Wally West moved to Keystone City. It is a bit more normal... er sortof... In any event it had both day and night. Besides I think most of the Flash's stories take place during the day in good weather so the Rogues will be seen. Bright colorful costumes like those demand to be seen and poor weather won't help that goal.

Yeah, and Captain Cold's parka would be too much on a truly hot day.

That's an awesome map, Scipio. Wish you had put in that groovy Infantino overhead shot in the link, but maybe Mirror Master sent it another dimension. The map does a good understated job of illustrating the ridiculous scale of Centra1l City, and the post actually gives a GOOD reason for it!

God help me I was just thinking about how amazing fast the Flash actually is. I mean think about it, even at his post-crisis, depowered, can-only-run-as-fast-as-the-speed-of-sound slowest, that's still a mile every 5 seconds. Given the limits of human vision, that's almost as good as light speed, especially in hand to hand combat.

Barry's top speed would, to the normal eye be analogous to teleportation. No wonder Central City needed to be so big!

Good job. What about Ivy Town with all that wacko stuff? Would be more a function of the map or of pogs?

Ivy Town. Interesting challenge; as you point out, a lot of the wackiness there is from the inhabitant rather than the geography itself... .

Actually, my next two projects are:

Ferris Aircraft, as viewed from high above in the sky. A venue for Highball Jordan to fight his flying foes and take advantage of that range of 10.

Crime Alley/Park Row, where the most of the alleys are rooftops are unlighted, and serves to hinder line of fire (but not movement).

Nice projects. What about Opal of Golden Age Starman?

Julio, you read my mind. An Opal City map would be awesome.

I don't have the foggiest idea how to play heroclix, but I love your maps.

"Hey, Kid Flash! Isn't that Grodd over at the other edge of the map?"

"Sure is, pal! Good thing I can run right through all of those cars!"

Does this map come with a Fiona Webb bystander pog?

What if the car's were removable, and moved two squares in the appropriate direction each round? Or just one square to represent how the speedsters moved past them?

I actually have in scale cars that can be used for that purpose. Those would be a great thing to use on the map (while ignoring the printed cars, except for the parked ones).

Minor, minor criticism (which i only say cuz i like the map a lot, am a big flash guy AND i'm a local gov't guy who gets paid to think about these things): aren't the cars going in the wrong direction? and isn't the flash museum sign facing against traffic?

Ah, I see the misunderstanding. The Flash Museum sign is something painted on the sidewalk for walkers not for drivers.

Question: how is Jay Garrick faster than Wally?

In one of your Central City posts you mentionned that the artist must never have seen a city before, but as a Carmine Infantino is a fellow native New Yorker I can tell you that all of that space represents our fantasy. You guys can fantasize about being to run at the speed of light, lift oil tankers and possess magic rings. We New Yorkers just want some room.

"Question: how is Jay Garrick faster than Wally?"

In the original set, they were feeling their way around how stats and powers worked together. It was felt almost right away that 20 squares was too far to allow any piece to move on a map that's only 24 x 24, and so all subsequent speedsters have much lower speeds.

But Jay remains, and has never been remade.

that puts it all in perspective now.