Super-heroes I'm Mildly Embarrassed to Have the Hots For #1


Okay, it goes without saying that I -- and anyone else who has the hots for a comic book character -- should be embarrassed about it. But, of course, we're not.

And who can blame us? Unlike celebrity crushes, our crushes (on average) don't get any older, never get fat or have bad breath, are always available, and can be ours on a weekly basis for around three bucks. Sure, they're occasionally mind-controlled into murderous rages, deformed by bizarre secondary mutations, or the victims on astonishingly unwise costume re-designs. But no one's perfect. 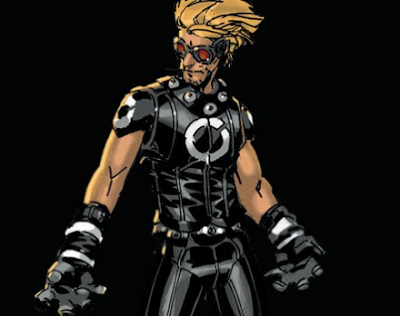 I'm not embarrassed because he was probably underage when I first met him in the original X-Factor in, what was it, 1986. See, cuz now that makes him 21, so it's cool. Yes; that's how that works.

I'm not embarrassed because he's a backwood hick with what is surely an earthy smell. That doesn't embarrass me. Any more. You never met my ex, Roy, whose only comment during our first visit to the National Gallery of Art was, "So, are all them the originals?" True story.

I'm not embarrassed because he's not classically handsome and has a wild, unkempt haystack of hair. I've always been more drawn to intriguing faces than generically handsome ones (it's a moody art-class girl thing).

No, I embarrassed because he's.... MARVEL.

Email ThisBlogThis!Share to TwitterShare to FacebookShare to Pinterest
Labels: SHIMETHTHF

I have been trying for MONTHS now to convinve people that somewhere along the way, Cannonball became really hot....but it always fell on deaf ears!

I've thought he was hot since the first time I saw him blast away wearing nothing but a bath towel...

I'm right with you Scip.

I started picking up Mike Carey's X-men just for the character!

I even went to wal-mart to get the Cannonball/Domino 2 pack.

And now (since his new black costume in X-men) he has a fantastic Chest Emblem I can make a shirt for.

Besides, I have a terrible crush on Guy Gardner, and have just discovered that the Shade is surprisingly hot.

The Shade Sally, into the geriatric crowd eh? (Sort of anyway...)

But then again I'm more of a Star Sapphire in her recent outfit kinda person so.... (Which is way better than that hideously dated airline stewardess costume...)

OH, so you really liked Cannonball? Even when he had GINORMOUS ears that made him look like an older version of Dewey from Malcolm in the Middle?

Mallet: I'm a Cannonball fan too; but that's not a chest emblem, it's just a letter "C", and not even a fancy one at that!