Where in the World is the Martian Manhunter?


Inspired by the Martian Manhunter, I've been doing some detective work.

As you may have noticed, I've been spittin' out the custom Heroclix maps lately. It's my version of knitting. Embracing the principles of democracy, I've been polling the people to find out who they want a map for, and the on/off leader has been...

Clearly, not only is the Martian Manhunter real, but he has the Martian Power of Vote-Fixing. Why he's been in the lead I cannot imagine other than the theory that his fans are SO delighted by his inclusion in, well, ANYTHING, that they're texting one another furiously to keep him in the lead (possible buying new computers just to do so; MM fans are hardcore folks).

This is what I get for embracing democracy: a lung-crushing Martian bearhug. Now, I have to put up or shut up and design a Heroclix map for the Martian Manhunter, wherever the heck he lives.

Impossibly daunting task, you say? Indeed. That's why I'm all over it. None of this Z'onn Z'orr hoo-ha; I'm not even gonna fall for the "Middleton" recon. The Middleton thing is only from 1988 (virtually yesterday when you've got as many rings in your trunk as I do) and there is no way J'onn's Silver Age adventures took place in Colorado.

How do I know this? Detective work. Well, actually it's more like basic literary research. I read the entire Showcase Presents: Martian Manhunter volume. Several pieces of evidence arose:

J'onn's city is on the ocean. The ocean, the docks, "Shore Road"; Silver Age MM stories repeatedly make it clear that the City is on the sea. And it's a part of the sea that has sharks... .

J'onn's city is somewhere warm. There is never a hint of snow or cold. People don't even wear overcoats. Of course, that could simply be because a fire breaks out in J'onn's city every 7 minutes.

J'onn's city is somewhere normal. You know. It's not like, in Texas, or anything. Cuz that would show. Now there are some hints that it might be in California, such as two stories in which movies are being filmed in the City. But hey, I passed two movie shoot locations just today, and I don't live in California.

Besides,there's a much stronger piece of evidence than the filming: baseball. The local baseball team in J'onn's city? The Flamingos. Obviously, a tropical, Caribbean town.

That leaves only ONE possible conclusion: J'onn's Silver Age adventures take place in Florida. Insane, but true. As Sherlock Holmes said, "when you have eliminated the impossible, whatever remains, however improbable, must be the truth." If you want to believe in Middleton, fine, embrace Frank Delano's wise conclusion, that J'onn left his original city and moved to Middleton later.

The name of this Floridan city? It's never explicitly stated in his stories. But I must deduce one anyway. So I culled all the names of businesses and locations within in the city, to look for clues there.

In J'onn's city, there are at least FIVE major businesses name "Apex":
Now, we know, from a real world perspective, that "Apex" is a generic company name that the authors of these stories clearly got into the habit of using as a default, probably without considering the cumulative effect. But, within the logic of the text (to the degree a Martian Manhunter text can be said to have any "logic") why would there be five wholly dissimilar businesses in the same city with the same name? 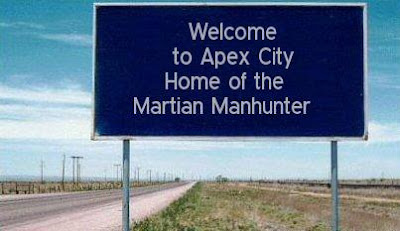 THAT is my conclusion and I'm sticking to it.

I'm curious as to how you plan to populate Apex City. What else is there in J'onn's word but an ever changing cast of detective partners and maybe a retconned in Miss Martian?
Wait and see, they say...

Anyway, I stopped by today after reading Blue Beetle #25, I was hoping to find the "Things that made you happy". BB made happy. Very happy. As in "happy to tears", something that very few things manage to do to this jaded piece of a man.

And I'm not just saying that because I thought it was Florida anyway...

And look, there's KSC just down the road...

This is one of those times where I hope DC's paying attention.

What else is there in J'onn's word but an ever changing cast of detective partners and maybe a retconned in Miss Martian?
Wait and see, they say...

Oh, you will see. Unnamed though it was, Apex City had a character all its own, if for no other reason than the whole dang town was constantly ablaze or getting hit by meteors: "Welcome to Apex, America's Most Flammable City!"

Whoever decided to ret-place JJ in Colorado must have never read an original Martian Manhunter story, because nothing could be further-- or, in this case, farther-- from the truth.

Wait, wait. Did you just say "J'onn's city is somewhere normal." ... and then conclude that he's in Florida?! I think you should go read the stories tagged "Florida" on fark.com and rethink that characterization. :)

I could TOTALLY see the Martian Manhunter stories taking place on the Gulf Coast. Apex City could easily be Pensacola or Fort Walton Beach or Destin.

I'm rooting for Pensacola. John Wesley Hardin was brought to justice there. Geronimo was held captive at nearby Fort Pickens. The old part of the city goes back to the 1700s. Lots of stuff that would make Apex City equal to Gotham.

Hey, don't look at me, I voted for the Green Lanterns!

That said, I applaud your detective work. Plus there is the bit about it bursting into Flames, while their baseball mascot is the Flamingos. Coincidence? I think not!

Great deduction, and what a great name for a contextualizing city!

You are a brilliant, brilliant man.

This is off-topic and I apologize, but I thought you might appreciate this article on Silver Age neuroses and Mort Weisinger.

I hear what you're saying about Florida, but it is "normal" in the sense that it has no accents or peculiarities that would make my conclusion unbelievable. For example, if J'onn were on the coast of Texas or Louisiana, you would expect things like ranches, swamps, etc., which do not appear in his stories.

The fact that Florida has a bizarre all its own works for this theory. J'onn is just one more Transplant to Florida, like all the Northern retirees.

I'm not certain whether Apex is more of a Miami or a St. Petersburg. I think farther south than St. Pete but on the gulf side... perhaps where our Port Charlotte is.

"what a great name for a contextualizing city!"

Yeah, when the idea first hit me I thought, "If they had named his city, that's exactly the kind of name contemporary writers would have given it."

Great stuff, and as a Texan, I agree that nobody ever places 'normal' stories here, even if the place seems pretty normal to me.

Of course, the only Normal American cities I know of are in Ohio and Illinois...

The Martian Manhunter, in his human identity, always wore that jacket. It's a bit much for much of Florida, all year round.

Northern Florida can get a little chilly, especially at night, and with the humidity, that jacket wouldn't look out of place (at night anyway) except for the hottest days of the summer.

I vote Pensacola too, because of the scenes from 'Contact'

I continue to commend your deductive reasoning, and the keen eye to catch the "Apex" thing. However, while reviewing your evidence, I came to realize that despite your dismissing Texas, he could very well have worked his mojo here...

1) We have sharks in Galveston Bay.
2) We've had snow in Houston twice in the last forty or so years.
3) Lots of docks and shores between Galveston and Houston, linking us to the Gulf of Mexico.
4) Doesn't "Apex" seem a bit whitebred to be within spitting distance of Cuba?
5) Texas is full of towns "owned" by chemical companies, breweries, and the like. "Apex" doesn't sound at all far fetched when you have kin living on Texaco Road or in Shiner, TX.
6) Houston's had a solid film industry for decades.

I'm not disputing Florida, as "Flamingos" does seem a dead giveaway. All our teams are based around the old west or aerospace. I'm just sayin' to say it...

Thank you, Frank! No higher Martian Manhunter related praise to receive than yours!

There were at least two appearances of oil companies, Frank, and that DID make me consider Texas in the running with California. But, yes, the Flamingos thing is hard to argue against. I really just canNOT picture a Texas franchise, of any kind, calling itself the Flamingos, LOL!

As for the Cuba thing, ha, no, I don't think so; besides, the same could be said of Texas with nearby Mexico! There are at least ten towns in the U.S. named "Apex"; any area that has hills to build a town on might find itself with a city named "Apex".

Frank, you're the JJ expert. Do you have any stories from outside the contents of the MM Showcase that contain companies named Apex that would bolster this thesis?

Actually, there is one piece of evidence I have omitted that suggests that Apex City is on the sea coast and a little further north. An iceberg (don't ask why) appears to threaten a ship and the captain says "icebergs almost never veer this far south."

That makes a gulf location impossible, and suggests Northern coastal Florida as the southernmost conceivable location for Apex City.

Your iceberg argument appears quite persuasive ... at first.

But this is Silver Age DC.

Compared to some of the stuff that happens in those comics, I don't have any trouble assuming that Aquaman or Mister Zero stashed it in the Gulf of Mexico for later use. Or maybe it's just residue from on of the classic battles of wits between Bat-Man and Bat-Mite.

Or maybe it just floated down from the Arctic, around the tip of Florida and then menaced shipping in the northern Gulf.

(Of course if you rely on too much reasoning like that, you could put Apex City on Java.)

Fantastic job. I'll assume Apex City as part of the Manhunter mythos from now on. Someone should go and do an edit on his Wikipedia page.

Bravo, Scip. As a Sherlock Holmes fan, your deductive reasoning reminds me of how Holmesians have deduced many details about Holmes and Watson's lives from similiarly scant pieces of evidence.

And "Apex City" is such a PERFECT name for a DC city that I wonder how they've missed it for all this time.

Thank you. On previous posts here, I opined that the Martian Manhunter needed a fictionopolis of his own in order to be successful. Little did I know, he had one of his own all along.

And soon I shall show you just how oddly unique that city is...!

In case anyone is wondering, the "Apex" named businesses I saw are:


I know nothing about how to make emendations to Wikipedia, but if anyone does, they could make the theory known there... .

Sorry for the delayed response. I don't recall seeing any Apex businesses in later MM stories, but again, all the House of Mystery appearances took place after he left the "Apex" police force, as well as the city itself. If anything, my finding more Apex would only hurt your argument.

Also, J'Onn visited Cuba in the "American Secrets" mini-series, if that helps...

And speaking of business names, feel free to check out this treatise I wrote on naming businesses in Gotham City:
http://the5earths1.50megs.com/earth-1/1985/batman00.htm