Ah, the Penguin. So underappreciated.

While I don't discuss it here often enough, I'm a big fan of the Penguin, and think he doesn't get the respect he deserves from modern writers and readers, who don't take him seriously enough.

This is ironic, since a big part of the Penguin's original schtick was "No one would take this funny looking man in evening wear seriously", a fact he frequently used to his advantage. Most people underestimated the Penguin, and he made fools of them of because of it. Batman, however, wasn't fooled, because (1) he's achingly smart and (2) people who dress like bats know better than to judge by appearances.

Well, the Penguin did effectively fool many others-- unfortunately that includes many of the people who've been writing comics over the last twenty years. As a result, the Penguin's frequently been written as a comedic foil or a weaselly stoolie rather than a serious threat (the Riddler has suffered similarly from a lack of understanding by writers, but don't get me started on that). Weak writers can only use hypermuscled heavily-armed "bad-@$$" characters as threats; weak writers need characters with obviously strengths, because it doesn't require them (or their readers) to be clever. Strong writers enjoy exercising their literary muscles proving that an effete little fat man or a triangle-headed geek in a leotard can be a threat, even to Batman. Strong writers delight in characters with hidden strengths.

Chuck Dixon brought a fresh approach to the Penguin in I guess it was 1995 when he re-imagined him as a not-so-reformed supervillain turned "legitimate businessman", and owner of a posh nightclub, the Iceberg Lounge, which served as a front for his nefarious doings. Fresh, I might add, does not mean completely novel; the exact same thing happened some thirty years earlier on the Batman television series (Dec. 7, 1966, "The Penguin's Nest"): 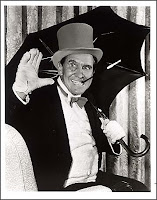 Robin: It sure is a shame, Batman. A restaurant with such terrific chow turning out to be a mere front for some criminal scheme.
Batman: Look at it this way, Robin. That $100 cover charge is pretty stiff. Penguin's "terrific chow" is hardly within the budget of the average worker.
Robin: Gosh yes, you're right, Batman. All the needy people in the world, all the hungry children.
Batman: Good thinking, Robin.

In fact, the Penguin did something similar in the Golden Age, once in "Birds of a Feather" Batman #11, Jun/Jul 1942 (his third appearance, in which he opens a 'honest' casino in Florida), and again in "The Penguin's Nest", Batman #36 Aug/Sep 1946 (on which the television episode was based).

Dixon understand that the Penguin was a smart guy and an old-time operator, a Batman-style crook with flair and gimmick, not a superpowered Firestorm supervillain (although he could swing that way, when he wanted). Parlaying his infamy into PR for a high-class joint that could both provide him with legitimacy and give him a front for criminal affairs is exactly the kind of thing the Penguin would do.

Good thing, too, for although Dixon meant for the restauranteer/crimelord concept to bring respect for the Penguin, other writers took the restaurant more seriously than they did its owner. Thus, the ICEBERG LOUNGE has become a permanent part of the Gotham City landscape, one of those places that always exists no matter how many times it's destroyed (like the Daily Planet building or the Flash Museum).

As in comic books, so too in Heroclix, where the Penguin also has gotten no respect. In fact, his clix is almost legendarily bad. But all the major Batman villains will get remade in the special all-Batman heroclix set this July, and some of them made again in the larger, villain-oriented "Rogues Gallery" set in the fall. This means at least one if not two new, and almost necessarily more useful, Penguin heroclix figures are coming our way.

So I want to prepare for those Penguins (and other Gotham City folk) by giving us all a new map for them: 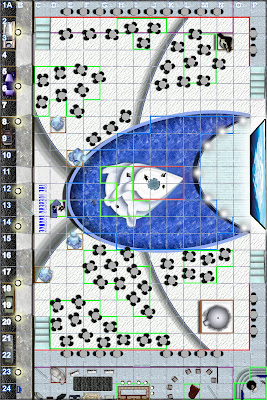 Click on map for a penguin's eye view.
No place is cooler than the Iceberg Lounge! Using this picture as inspiration, 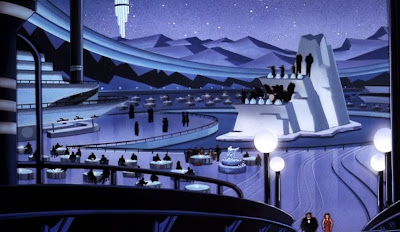 I tried to capture some of the elements commonly used to depict the Iceberg Lounge: the pool in the middle, the icebergish sculpture in the pool, the ship shaped dancefloor, the polar decor. I didn't have the ability to put a tuxedoed dance band on the sculpture, I'm afraid, but I was able to substitute with some actual penguins.

I threw in some special rules for windows and doors (which are long overdue on standard Heroclix maps anyway). You wouldn't think an all-white room would be an easy place for stealth, but with clusters of tables serving as hindering terrain and some balcony seating for leap/climbing, it's a pretty Batman-friendly map. Can't wait to have Batman and Robin leap to the top of the pool sculpture and hurl some batarangs at tuxedoed goons. And who knows, with all that water, maybe Aquaman might join in the fun!

Still, the elevated terrain is pretty exposed, so it's not exactly a dark Gotham rooftop; beware. The Dynamic Duo might need to duck for cover into the upstairs bar ("They may be drinkers, Robin, but they're still human beings and might be salvaged.")

Note that the Penguin has his own private dining area, upstairs near the bar where he can oversee everything. Because, you know, he would. In fact, if you could see the map at full size and detail, you'd see he's about to chow down on a big plate of sushi. Yes, really.

Later, I think I'll expand the map to a 3x3 version that includes the hidden areas of the Iceberg Lounge: private dining for wanted felons, the casino, the Penguin's office and armory. Or perhaps instead I'll make another 2x3 map that's a generic gambling joint. Then it can be a stand-alone map OR can be placed to the right of this map to serve as the Iceberg Lounge's hidden back rooms.

Remember, there's always more to the Iceberg than meets the eye! But for now I wanted to see how you like this version. And please be kind; it may not look like much, but it took of lot of trial and error to get the look I was going for.

DJ Tux is at the Iceberg Lounge's "Ladies' Night" every Thursday night...

Gosh yes, Scipio. When you put it THAT way...

Bravo on another explication of a misunderstood villain, but I personally would actually LOVE to read a post in which you "get started on" the Riddler. I've always thought the "I have an obsessive compulsion to leave riddles at the scene of my crimes" thing was an uninteresting oversimplification of a complex character in the same way that you've previously pointed out how "Two-Face is a multiple-personality case" is a wrongheaded approach.

I love the Riddler because of his arrogance. No powers just a really smart guy but he feels the ONLY challenge for him is the Worlds Greatest Detective.

Thats some serious pride in ones self right there.

But it's not just that he's playing a game with Batman, it's that he's decided it's only fair that he give himself a handicap in it. To give the World's Greatest Detective a sporting chance.

Also, no Batman villain dresses as stylishly as the Riddler: FACT.

this is the best heroclix map ever, thank you, my bat family is going to own my best mates crusty avengers team around this place nine times over, do we buy it from your store as a download?

Given the size of that place in the image, shouldn't it be in Keystone City?

I love these maps, and I don't even play Heroclix! (Though I do own a few figures, and these tempt me to start playing....)

I have this problem with Heroclix that seems to have cleared up: Namely, that I couldn't buy a box without getting Batman. I have a very small collection of heroclix, and for about 3-4 weeks, around the release of Origin, I bought a bunch of packs of it, and ended up with every pack having a Batman. And, to add to it, at around the same time the FCBD release was.. Batman.

So forgive me if I'm not excited about Heroclix: Batman. I mean, I just can't see the difference.

No purchasing necessary, chief. Just copy the file from the web, or if you email me, I can send you the file for to get printed.

Heh. Yes, indeed, the Iceberg Lounge is not a small place. But then, look at the original picture...!

"As a result, the Penguin's frequently been written as a comedic foil or a weaselly stoolie rather than a serious threat (the Riddler has suffered similarly from a lack of understanding by writers, but don't get me started on that)."

"And please be kind; it may not look like much, but it took of lot of trial and error to get the look I was going for."

This bit was a joke, right?

The Iceberg Lounge is gorgeous. I can already picture a giant firefight raging all around. People shooting over banisters, others taking refuge behind kicked-over tables, penguins waddling in all directions looking for a place to hide.

And here's me, spending the last three days trying to make a Central Power Battery that doesn't look like it was made in MSPaint.

"And please be kind; it may not look like much, but it took of lot of trial and error to get the look I was going for."

This bit was a joke, right?

Not at all. Compared to something like the Ferris Aircraft map, the Iceberg Lounge is rather spartan and doesn't seem to have a lot going on, pretty though it might be. And I had to re-think the positioning of the terracing and such repeatedly.

I'm glad you like it. I actually had some "kicked-over" versions of the tables I was going to throw in, but didn't. I thought this map should depict before the fight, not during.

man i dig the iceburg cafe,
where on the site is a link to other maps?

Thank you! I have now put links to the previous recent maps in my sidebar for you to easily get to them.