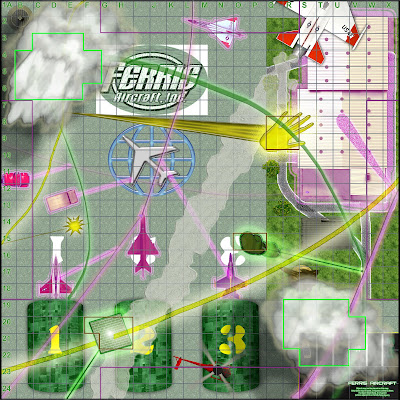 I tried hard to get an aerial feel for the map by creating an impression of three-dimensionality; how'd I do? This was an experiment and I'm interested knowing in what you think worked well... .
Posted by Scipio at 3:41 PM

I don't play HeroClix and I don't fully understand what's going on here, but I think I like it.

Why, this is lovely! It's neat to see things from a flyer's perspective, and I think you've got that down pat.

As a new Heroclix player with only two games under my belt, I think it looks pretty good. I'm going to try using it in HCOL. Thanks!

Hm. Maybe we could make some objects for this map!

RE: the poll on the side.

Damn! You're going to beat me for a Battle for Oa map.

Oh, and I forgot to comment on this map!

Looks great, Scipio. Aerial maps are a great idea, and this one looks like a lot of fun.

Between this and and the Central City map, I'm going to be spending the whole of my next paycheck at Office Max.

Next Heroclix map: a playing field for the Atom, in the form of Batman's workbench. Not quite sure whom he'd be fighting, maybe some bugs or a bat.

"I'm going to be spending the whole of my next paycheck at Office Max."

Can't you get them printed more cheaply and nicely the folks at xiongames.com?

"a playing field for the Atom"
Derek's already made a great map for the Atom! I'd like to make one, but I couldn't think of enough "shrinky" figures to use on it...