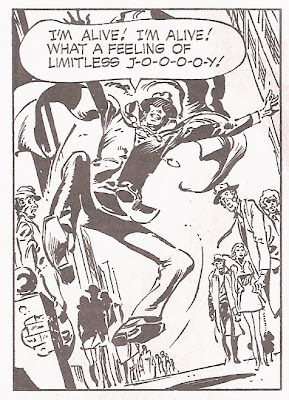 I am officially startled. I know I've read all of the PS series collected in the Showcases (getting them all was the goal of my first couple of years of collecting) but I have *absolutely* no memory of this.

Best guess would be that he was possessed by Deadman-- but that doesn't sound like Deadman-style dialogue. Possessed by some similar ghost?

The more Phantom Stranger stories you read, the less you understand him.

That HAS to be an inpersonator. I bet it's Plas. Or Plas on Drugs...

It's the Phantom Stranger.

From the "J-O-O-O-O-Y!" I gather that the Phantom Stranger on drugs sounds a lot like Charles Nelson Reilly.

I think the Phantom Stranger's greatest, and most mysterious, power is the ability to keep his eyes in the shadow of his hat brim, no matter from what angle you see him...

Well! That's something that you certainly don't see every day!

Maybe he just saved a lot of money on car insurance.

Like Batman out for a stroll in the daytime, this is not something you see anymore.

Judging by the expressions of the passersby, it wasn't an everyday thing THEN either...

I'll have some of whatever he's having!

I think the Stranger should burst into song and dance at random more often. Totally.