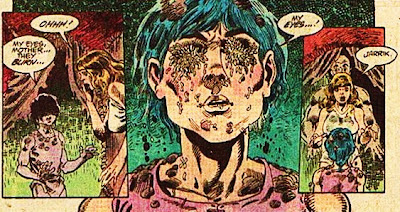 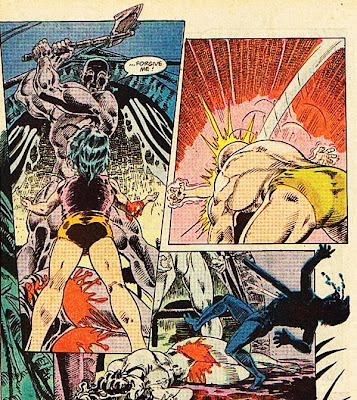 Eventually, editors recognized the danger of a literary pandemic, and naming the plague "Vertigo", they isolated the virus and sent the irreversibly infected characters off to live in permanent quarantine so as not to affect their Underoo-selling icons.

THAT is the single best explanation of the DC sub-division "Vertigo" that I have ever heard.

Any thoughts on the theory that all of the British writers who infested DC in the late 80s and early 90s were Alan Moore writing under different nommes de plume? (It would befit Mr. Moore's sense of humor to name one of his pseudonyms "Kneel Gay Man".)

Was that Lords of the Ultra-Realm?

"What really puts Jarrick among the Great Corpses is that his father split his head with an axe afterwards."

Split his head and half his torso, looks like. Yeesh.

Which comic is that scene from? I don't recognize it as a scene from Moore's Swamp Thing (haven't read any by Veitch or Collins), and the art doesn't look Hellblazer-y.

Yep. Just what I would expect from a comic about a science hero with super-shrinking powers.

Great Shades of Elvis....no wonder the Vertigo Contagion had to be contained!!!

Nice ass on the dad, there. Butchering your zombie child really works those glutes.

Sword of the Atom - The gift that keeps giving!

I noticed that, too, Brian; the front view is also ... substantial.

I'm sure he'll have a brand new family in no time!