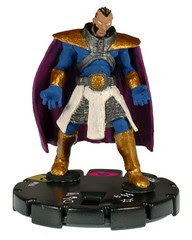 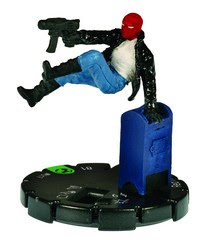 New pics from the next set of DC Heroclix, "Crisis", have turned up (in Belgium, of all places, but don't ask).

Black Adam, pile of skulls? Heh heh. Nice cape, too. My stab at a special power for BA: Genocide -- Black Adam may kayo all enemies simultaneously if he rolls a 12.

Jason Todd, going postal! Special power? I say he gets to do a Regen roll AFTER he's been kayoed.

A Monitor. If there were still LEs', I would expect "Bob". Dang, those are big hands! He's already got the Quintessence ability; what kind of Special Power would a monitor have?

Starfire and Nightwing on a Duo Dial? Hm. Seems like overkill. If this means we won't be getting a new Nightwing solo figure, a lot of people will be unhappy about it. I'm not sure what kind of Special Power they would have together, but I'm sure I wouldn't want the kids to see them use it.

The new set is due out in February!
Posted by Scipio at 6:40 PM

I thought you had to roll 52 for Black Adam to lose it, or is it THAT much more common?

I give them props for doing Nightwing in his disco costume.

Does Jason Todd have special fish gutting power? He gets close combat expert AND blades/fangs/claws when attacking an aquatic character? (Sorry, I'm still reeling from that blatant knife abuse in the latest Countdown)

Why does everyone refer to that as his "disco costume"? I was alive in the disco era, and I don't see the connection. Am I missing something?

Finally, I won't have to feel embarassed for the guy every time that his 15 def w/Impv. gets Outwitted and he gets knocked off of his effective clicks the first time he's in line of sight.

He'd better have a bad ass dial. I'm expecting something in the 220 point range. He should at least be able to go toe-to-toe with the vet Mary Marvel.

The Nightwing/Starfire duo is neat, but I'd still prefer a new Nightwing in his current costume.

A Robin II Jason Todd, with a special power that lets him push coke sniffing sons of diplomats off of balconies, that I'd be interested in. Winick Todd? Not so much.

When my buddy and I split a "Crisis" brick and hold our figure draft I don't expect Todd or the Monitor to go very high. Well, higher than Forerunner, but not very high.

Todd's boots are kind of unfortunate. I know he's been dead since the 80's but that doesn't mean he has to dress like a villain from a Chuck Norris movie.

Dunno where you got this... don't care how many Bothans died to retrieve it... but my gaming buddies and I are jazzed for this set beyond all reason!

No Bothans were harmed in the making of this post.

Belgians, however-- well, let's just say they were considered disposable.

These figures are pretty cool but I can't get obsessed with another thing to collect. I have one ( a Batman ) that a friend gave me & it kinda makes me want more.

If you're a Batman Fan please visit my blog.

what kind of Special Power would a monitor have?

Judging by that Heroclix statuette, he has "Jazz Hands".

"Belgians, however-- well, let's just say they were considered disposable."