The End of an Era Underwater

"I'm not the real Aquaman. Not even close. The real one gave up his life for me, and it's my job now to make that right."
From Aquaman: Sword of Atlantis No. 27.


Thus ends Tad Williams' run on Aquaman: Sword of Atlantis, and today I applaud his work.

He was given a Sisyphean task of making Aquaman work without Aquaman. A less conscientious writer would have swung off completely on his own tangent (like Busiek did), or ignored any inconveniences of the previous runs.

But Wiliams didn't; he embraced them and used them for his plot. He solved the mystery of Sub Diego, using both traditional Aquaman villains and a Very Special Guest Villain (and he did that while not only dodging the curve ball thrown by 52, the raising of Sub Diego, but using it to his advantage). He explained where AJ came from and what happened to the real Aquaman (something his predecessor couldn't be bothered to do in a timely fashion). He even worked in bizarre elements like Veitch's Lady of the Lake, Windward Home, and King Shark.

He introduced new elements and characters to the Aquamythos, such as Topo, the Clownfish, the Hatch system, and the villains of the Deep Church. He reintroduced Mera, Tempest, Black Manta, the Human Flying Fish, Koryak, Aquagirl, and Cal Durham, making them all part of a much larger story.

You might not adore every single thing he did, but you can't deny his herculean accomplishment in tying it all together! Under Williams' direction, the sea seemed both larger than ever before and more intimately connected, an enormous stage set for decades worth of stories.

And did it move! Aquaman went, overnight, from being one of DC's slowest stories, to one of its best bangs for the buck. There was more going on in one page of Williams' Aquaman than in an entire issue of of Veitch's or Busiek's. I usually had to rest after reading it (in a good way). 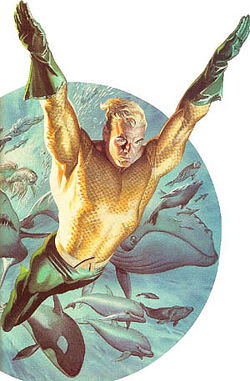 By letting go of pushing AJ as a replacement for Arthur, he allowed us to see that, quite on his own, AJ was not too shabby. Busiek's Sword of Atlantis splashed about in search of himself; Williams' AJ saved the world. When the real Aquaman returns (something Williams clearly wanted to do, but was blocked from by DC), his new writer would be wise to take a similar approach!

At the end, he made his point: this guy wasn't Aquaman. But he was going to man up and try to bring him back, and just maybe deserve his legacy in the process of trying. Before Williams started, all I wanted was for the real Aquaman to come back and AJ to go away. Now I want the real Aquaman to come and AJ to stay as his Junior Counterpart (because, face it, "Tempest" doesn't cut it).

Thank you, Tad Williams.
Posted by Scipio at 9:40 AM

Best of all, when Aquaman does come back, he can be resurrected "whole," i.e. with two hands, no "magic water hand" powers, with Neo-Aquaman left over to carry the legacy of the Veitch/Pfeiffer/Busieck stories. (Joseph could be the Aquaman of Sub Diego, while Arthur is the Aquaman of Poseidonis and the JLA)

I just don't think we can call him "AJ" anymore, since he's kind of sick of the "Arthur" name. Maybe "JC"?

For those of us who didn't read it, could you please let us in on the secret?

Williams knew going in he had to work at a fast pace. From the DC boards, he knew that he wasn't going to lure back many die-hard Aquaman fans.

The series was doomed before he took over, and he was aware of it. He begged us to buy the book, and said he was our only chance of seeing the real Aquaman again. (But we didn't want to encourage DC, so we abstained even though we knew Williams would do a good job with the crap he had to work with.)

So that's why his short run covered so much ground.

Since DC refuses to undo the OYL mess, as they did for Flash, I'm done with Didio's DC. He's either egotystical or stubborn, and insists on backing revisions that fans DO. NOT. WANT.

JUSTICE did everything right. And was probably a fluke. More's the pity.

Just for the record, I don't mind AJ, and I'm about as big of an Aquaman fan as they come. I miss Orin (I'll call him Orin to avoid confusion) and want him to return, but I don't want DC to ignore AJ and pretend the last few years never happened.

Orin & Mera as King and Queen of Atlantis. Orin still socializes with his JLA friends, but he dedicates most of his time to ruling Atlantis. The superheroing is left to his Galahad, AJ. The role of "Aquaman" should be treated as Atlantis' top military and diplomatic position, given the official title of "Sword of Atlantis". AJ defends the kingdom of Atlantis with the Atlantean army, and he protects the surface world as a part of the Justice League. Orin steps in to help in times of extreme crisis, but otherwise acts as a mentor to AJ.

Garth can be chief advisor to King Arthur, dealing with the economy, politics, religion, and sorcery.

Garth is Orin's most trusted friend and advisor.


I actually really hate DC's trend of returning everything back to the way it was in the 70's. Just because I love Oliver Queen doesn't mean I can't enjoy Connor Hawke.

"But we didn't want to encourage DC, so we abstained even though we knew Williams would do a good job with the crap he had to work with."

This was my way of thinking, which I now bitterly regret. Curse you, Scipio, for pointing up my error! I now retire to my lair to gnash my teeth, berate my subordinates, cast blame on the blameless, rant, and hope for a TPB to cover the issues I stupidly missed. Bah!

Yes, pray do tell where the hell AJ actually comes from.

Scipio, you're ALMOST making me want to read Aquaman.

It's a little late to read Aquaman now. I'm going to be checking out the trades though.

Well, that's what trades are for... I never said "buy whatever Aquaman issue comes out next..."

Has it been cancelled, or did they just pull Tad Williams from it?

BTW, I completely hated the first issue of Tad William's "The Next" or something like that.

Supposedly, Aquaman was blown into two bits - the Dweller and AJ. AJ has the Lady of the Lake's mojo which stayed with him and was most of the reason for the split.

Well, that's the only sensible, reasonable, logical thing to do. AJ is a disaster. Fans didn't want the change, nor did they support it. But since Didio is all about Didio (screw the DCU and its fans), he will refuse to admit his mistake.

Fans such as myself don't want DC to return to the 70s either. We want new stories about the REAL characters. But that doesn't mean we MUST accept idiotic ideas and pointless changes.