Pardon me if what I am about to discuss it already obvious to all of you, and I'm the last person to really catch on. I have always realized that the Infinite Crisis Gang (Old Superman, Alexander Luthor, and Superboy Prime) represented criticism of the degraded,90s-style, Marvelized version of the DCU that has existed post-COIE (Crisis on Infinite Earths, 1985). But it only really hit me yesterday when Julian (one of our Heroclix judges at Big Monkey) pointed out that "Superman Prime" (as presented in the Superman Prime Issue No. 1 special) is Fanboy Outrage personified. Julian called him, "Newsaramaboy Prime".

Like us, Clark (his name is Clark Kent, remember?) is from a universe where the DCU as we know it is just a series of comic book stories. 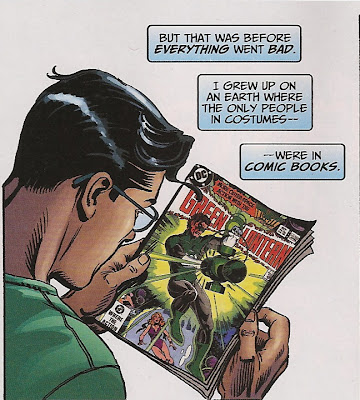 I'm not saying Clark's an idiot, but ...
he is wearing a Green Lantern shirt and reading a Hal Jordan comic book.
Specifically, it's 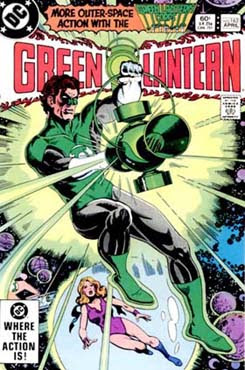 Green Lantern No. 163 (1960)
I love the fact that apparently Hal keeps a Babe in Bubble in tow
for when he gets, ya know, the urge.
Note that the comic he is reading is from 1960, way before the COIE. It's not even Bronze Age; it's Silver Age. The comics in his reading pile pictured on that same page are also Silver Age. The creative team could have chosen to show him reading comics from as late as the early 1980s, but they wanted to make it pretty darned clear that Clark is an old-school comics reader.

In his original story, he was excited to learn that his comic book heroes were real. But whenever a comic book reader thinks that characters are behaving "off-model" or those characters are replaced by new versions, then they become less real to him.

Except for Vibe, who lives in the hearts and minds of all joy-loving people. Like Santa. 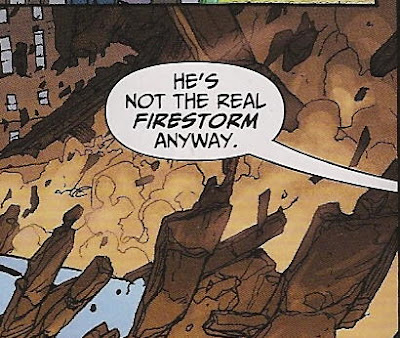 Darned right he's not. The real Firestorm was an utter moron.
This one's great and actually deserves his own series. 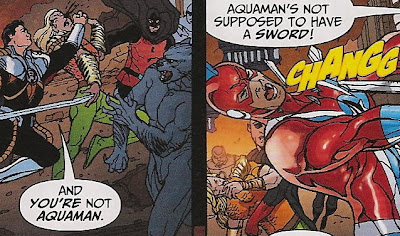 Just because Clark is a murderous wacko doesn't make him wrong all the time, you know.
To Clark, these pale copies of his heroes aren't real at all. That explains why he's not so upset when he kills or maims. That, and the fact that he's a crazy punk.

Clark, like many fans of the pre-Crisis DCU, is disappointed that he was asked to sacrifice the world he loved for the promise of a better one, which turned out, in his eyes and by some objective criteria, to be worse.

Note that Clark doesn't say "what happened to Sue Dibny"; he says, "what they did to Sue Dibny". They? Surely he's not refering to Dr. Light and Jean Loring collectively in incidents that took place with many years of timeline between? Nope; that makes little sense. This an example of Clark as a metatextual commenter. It is we who talk about what "they" (DC writers and editorials) did to Sue Dibny in Identity Crisis.

But, like so many of us, Clark's not about to let go, shrug, and say "oh, well". Like us, he's a rabid fan and he's going to stick around to help make the DCU more like he thinks it should be. He won't rest until Batgirl's not a villain, Spoiler has a memorial case, and Vibe comes back from the dead. 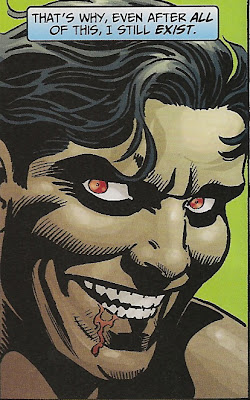 Even if he has to rend some characters limb from limb along the way... .
Posted by Scipio at 9:41 AM

Me, I love the delicious, twisted irony of him turning into the epitome of everything he despises the most -a violent mass-murdering wannabe-hero who looks like he stepped out of an early-90s Image comic, especially in that Antimonitor getup.

It makes me laugh, even though I kinda feel sorry for the sociopathic little brat.

That comic is definitely from the 1980s. I'm pretty sure it was during Mike W. Barr's run.

Also, you probably knew this ... in SBP's first appearance (back during the time of CoIE) he told the Earth-1 Superman that he wanted to grow up to be a test pilot, "like Hal Jordan". Earth-1 Superman was overtly unimpressed.

Yeah, I own that issue of GL. It's definitely from the early 1980s.

I wonder if Marvel existed in SBPs world? I don't suppose that we're ever going to see him say "you're all as bad as characters from that other company!"
And yeah, I thought 60 cents seemed pretty pricey for a 1960 comic (real books - or at least paperbacks - cost about that at the time).
This doesn't seem like the kind of mistake that Scipio would make, so I have to wonder if it was planted deliberately in order to set off a wave of fannish nitpicking in order to prove some point.

Ah! THanks, all. I thought the cover looked too modern. Yes, it's not Silver Age.

I think your interpretation is spot-on.

You'll find further support for it in SBP's single most significant action: standing just outside the walls of the universe and punching it to effect changes in its history. Like so many howling fanboys hammering away at DC.

The wall is DC: the point at which DC's fiction ends, and beyond which is DC's commercial reality. I like that DC appears in its own comic this way. Indeed, to the extent that SBP smashes between the two, 'Infinite Crisis' becomes non-fiction.

btw - also, as a first time caller, I must say I like your blog. Thanks!

"I'm not saying Clark's an idiot, but ... He is wearing a Green Lantern shirt and reading a Hal Jordan comic book."

You wound me to the quick, Scipio.

Maybe Clark would have been happier if he'd supported books like Chase, Chronos, Resurrection Man, Major Bummer and Young Heroes In Love.

I know I'd be happier if those books were still around.

You'd think it would be obvious from a single glance that a 60-cent comic did not come from 1960...

And why the use of the perjorative "fanboy"? Only in the comics industry are lifelong customers insulted for their dedication and patronage.

Marvel and DC should be on their knees thanking each and every "fanboy," because everybody ELSE has long since stopped buying these things.

Scipio, yours is a terrifying concept...and probably quite true.


But I STILL want Sodam Yat/Ion to kick his little super butt.

I would apply the same interpretation to Hal Jordan/Parallax in Zero Hour, whose master plan was to bring back the Multiverse. Of course, he had to be stopped...

And why the use of the perjorative "fanboy"? Only in the comics industry are lifelong customers insulted for their dedication and patronage.

Well, not quite. Trekkies get it as well.

It's interesting to contrast the Big Two comics companies today and their approach to selling comics in a world that has outgrown them, a product that used to be inexpensive, fun entertainment now vastly higher-priced in a world with much more competition for the entertainment dollar.

DC seems to be bending over backwards to win back the middle-aged fans whom it lost at COIE and the gross mismanagement that followed it; while Marvel seems intent on thumbing its corporate nose at the older fan and appealing to the lowest common denominator among the current generation that was nursed on Grand Theft Auto. Time will tell which strategy is the more effective.

Who says great minds don't think alike? I read the issue and came to a similar conclusion:

Now, granted nothing says Big Bad like popping Pantha's head off, but this is why I always thought Infinite Crisis was deceptively gray rather than black and white. Even as we're rooting for "our heroes," there's part of us rooting for bad guys on the part of popular opinion. Great post.

Yeah, I remember thinking that SBP was a metatextual 'fanboy' stand-in when I read IC, and a pretty well executed one at that.

In some ways, he's a lot like the character Bruce Timm played in the Grey Ghost episode of B:TAS, in the way that he represents the worst elements of fandom, but I actually think he's more interesting for the way that he becomes the exact thing he's fighting against.

Superboy-Prime as reader stand-in only works if one is intellectually dishonest. No one complaining about the rampant misogyny and gore in Didiot-era DC has gone one a killing spree. Of course, intellectual honesty is a rare thing among the apologists for these sorts of comics.

Could all this metatextuality be building up to a DOCTOR THIRTEEN AND TEAM 13/SUPERBOY PRIME BATTLE ROYALE?


We can only hope

No one complaining about the rampant misogyny and gore in Didiot-era DC has gone one a killing spree.

But few of said complainers have SBP's power.

I firmly believe that at least 90% of the law-abiding citizens of this country abide by the law for one reason only: fear of punishment. Take that away and you get SBP; or Paris Hilton.