Today is Haikuesday at the Absorbascon, and who better to hear from than that master of all disciplines, Batman?

Batman and Superman's friendship, like all long-term relationships, is based on playing on each other's strengths and weaknesses but seldom acknowledging them. Superman is the muscle; Batman is the brains. Occasionally, Superman, in his blunt reporterly fashion, will remind Batman that he's as vulnerable and powerless as a China doll.

But when Batman asserts supremacy in his department it's always more subtle... too subtle for lunkhead Clark to detect with his supersenses. And for extra snottiness, Batman will do it in haiku (not that Clark "How many paragraphs does the story need to be again?" Kent would notice!). 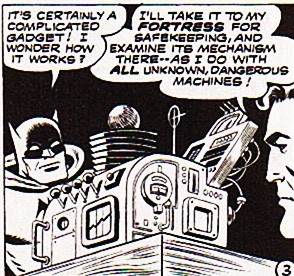 "It's certainly a
complicated gadget! I
wonder how it works?"

I imagine this spoken in the same tone that a parent takes when handed a page full of crayon scribbles which he's told is a giraffe: "Why, it certainly is a giraffe,Clark! I think it's the best looking giraffe I've ever seen!" Superman answers in the solemn-child voice with his version of, "I don't want stupid Kara messing up my picture. I shall put on the very top of my toy shelf, where she cannot reach, so that she will not damage it."

Naturally, what's really going on is that Batman is analyzing and memorizing the design and circuitry so that he can reverse-engineer it, while Superman stands there blankly posing for the Kandorian quarter. Superman loves having his face on quarters.

What haiku can you compose to celebrate Batman's sneaking condescension of Superman, or the machine that inspired it?
Posted by Scipio at 9:23 AM

You keep the gadget,
or you can trade it in for
Carol Merrill's box.

Not a haiku, but I would pay good money to see anyone in Batman's Rogues Gallery defeated by a "Complicated Bad-Gadget".

Is this more or less
advanced than the device that
fashions your spit curl?

'You're dumb, Superman.'
'You're a wuss, Caped Crusader.
I can squash you flat.'

You only live twice,
Once when your planet blows up
And again when a bat flies through your window.

with respect to Frank Miller,


It's krytonite, Clarke.
It took years, cost a fortune
Luckily, I have both.

"Batman and Superman's friendship, like all long-term relationships, is based on playing on each other's strengths and weaknesses but seldom acknowledging them."

I thought it was based on wearing each other's clothes and impersonating each other at the slightest pretext.

maybe it comes down to the same thing.

That's one of their mutual weaknesses. You'll notice they never talk about it.

The Fortress? Oh, please.
We both know you're going to
kiss ass at STAR Labs

What's the matter Bruce?
Not one clue? I thought you were
the Goddamn Batamn