Why Lana and Superboy Put Up With Each Other 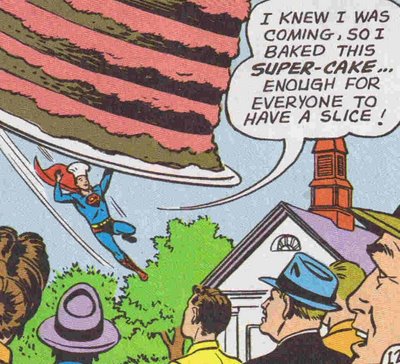 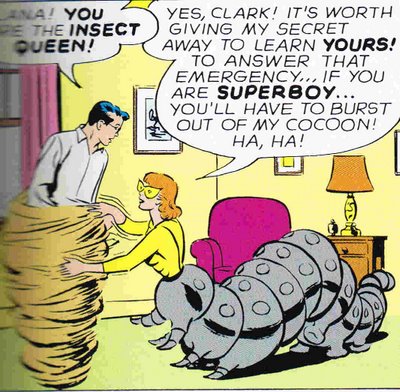 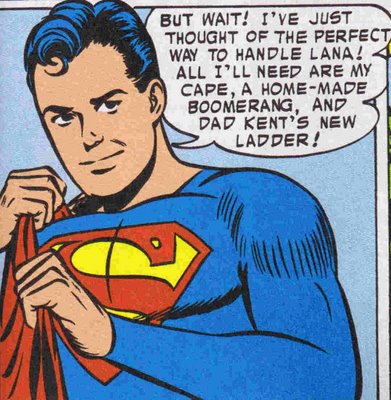 SUPERFREAKY.
Posted by Scipio at 8:05 AM

I can't touch that.

I think that last proposition Suberboy had is illegal is several of the 50 states.

See, today was not a day I needed to read about Superboy bug sex.

She's an arthropodic girl
The kind who might give birth to larva
And she will turn her lover into chow
Because she's the Insect Queen!

She likes the boy Superman
The one that Bibbo calls "his fav'rit"
And when she puts him in a cocoon it's the right time
To trade identities.

Ah, so close and yet so far, Clark:

All I'll need: my cape
A home-made boomerang, and
dad Kent's new Ladder.

And if Clark wasn't Superboy, does Lana the Insect Queen eat him?

Horrifyingly, my very first thought upon seeing that wriggly Lana-pillar was, "Oh, she's just about the right size for that bent-over Colossal Boy to enjoy."

I feel the need to shower with bleach.

Actually, the last panel reminds me more of MacGyver than Rick James!

You see, this is why I always thought Clark should have stuck with Lana, instead of that Lois chick. (Plus Lana is a redhead which is always a plus in my book.)

The birthday cake pannel has always amused me. Especially the next panel, where everyone decides to lock it up in a display case, in memory of Superboy. Then there's the tag saying "Cake Made by Superboy". Ugh.

Re the cake: Superboy is the only person in Smallville who doesn't know that Superboy is an awful cook, and they're all too nice to tell him. "Eat it! Are you k-... I mean, er, I'd rather save it as a memento of this day. Yeah, that's it."

Every time I see Lana in her Insect Queen costume, I want her to ask Superboy, "Does this costume make my butt look fat?"

mmm... The last time I went to a girl with the "home-made boomerang and a new ladder" trick, she slapped me. Perhaps I must focus on insect queens only.

Tom Foss, that "Insect Queen Superfreak" song is brilliant. When I meet my own Insect Queen, that'll be "our song"

Because there are some things for which a store-bought, mass-produced boomerang are wholly inadequate.

Sure, you can use a storebought boomerang on some street trollop, but if you're with someone you really care about you make your own.

Jeckie, are you pondering what I'm pondering?

I think so, Brainy, but where are we going to get a super-elastic blanket, a hand-crafted boomerang, and a 20th-century ladder?

The eyes of Clark are glowing in the dark
All the sweet, pink icing flowing down -
No-one ate the cake he baked in vain
And they wanted to display it
But that only would betray it
And he'll never have that recipe again
Oh, no!