Comics are a medium given to bombast and hyperbole. Particularly at certain

But let us be subtler. Let us revel, not in the gross pleasures of exaggeration, but in the delicate witticism of the Art of Comic Book Understatement, as practiced by DC.

Let others drown their tastes and senses in the cheap beer of overstatement only to collapse groggily in the mung of regurgitated declarations of "awesomeness"; we will look on -- or, indeed, away -- and savor the mellow of our dry literary Chardonnays.

Often such Understatement is most delicious in older vintages; why, here's a Silver Age one I just plucked off the shelf: 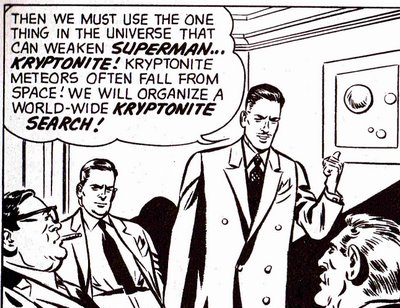 Ah. Now that's a delicious Understatement. Yes, Mr. Mustachio, I think it's definitely fair to say that in the Silver Age Kryptonite meteors fall from space at a rate one could appropriately term "often".

Of course, this being DC, I'm surprised they didn't immediately organize some sort of Super Secret Agency Far Far More Secret Than The CIA and call it the Kryptonite Acquisition Location and Elimination Lads, or KAL-EL for short. :)

Ah, DC do loves them some gubmint agencies!

Yeah, but it's Marvel that loves the acronyms.

Kryptonite...The weather channel should be all over this...

In this isssue, Superman vs. CAPTAIN OBVIOUS! And only one shall survive!

Not to belabor the point, but considering the amount of Kryptonite floating around in the Silver Age, Krypton was a planet roughly the size of the Andromeda star system, about an hour's drive away from earth...

Seriously, I'm not sure how I prefer my Kryptonite served: in small, bite-sized chunks that mutate teenagers; in fist-sized portions for every gangster in America; or by the warehouse lot for your bald ex-President.

I find the biggest understatement in that panel to be "we will organize a world-wide Kryptonite search!".

Wha? Huh? Who the hell is this guy that the idea of putting together and running a world-wide search for anything doesn't phase him in the least? I mean, the logistics alone would seem to be pretty daunting.

This guy should be President.

Not phased? He ends every sentence with an exclamation mark!

And the last two in bold!

How much more phased could he get?!

This guy looks like he gives a good PowerPoint presentation.

Kryptonite meteors often fall from space. Occasionally, though, they fall from tables or low shelves.

Since we're all nerds here: it's "faze", I believe. None of this should "phase" the guy at all, unless it's, um, translucent kryptonite. And he's secretly Kryptonian.

Understatement in Silver-Age Superman? How much power was in his little finger again? Was Lois Lane really wearing a safe over her head?

"Lois, put the safe back on your head -- it's nearly time for the 6 o'clock Kryptonite meteor shower, and you wouldn't want to get any Green K fragments stuck in your hair..."

I always thought that that was one of the best things about the Byrne Superman: there was one kryptonite rock, and its presence was very well explained from the beginning.

A-HEM! The presence of so much Kryptonite on Earth in the Silver Age was explained from the beginning, thank you so much.

Jor-El designed his son's rocket to create a space warp, so that his infant son wouldn't arrive on Earth at the age of eighty. When Krypton exploded, dozens of fragments were blasted through the warp created by the rocket. Tell me why that's less plausible than anything else in mainstream comics.

Because then there should have been plenty around the rocketship, which would have killed baby Kal-El as soon as he was taken out of the ship.

Not necessarily. The rocket had its own propulsion system, but the meteors were powered only by inertia. The rocketship reached Earth ahead of the meteors, and thus the Earth's rotation caused them to end up in different locations.