For those of you enjoying the total insanity that is "Battle for Bludhaven", I need to draw your attention to Professor Radium. You know, the guy who looks like a green Hugo Strange.

The rest of the characters being reintroduced in the BFB are crazy Silver and Bronze Age commentaries on the post-WWII nuclear era. Prof. Radium is not.

Prof. Radium is a Golden Age Batman villain (from Batman #8, in fact). 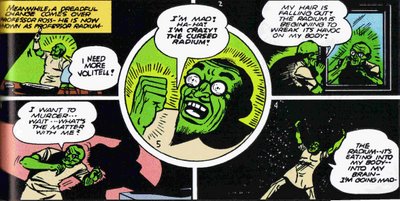 I'm guessing Prof. Radium was a Joker fan, because he does that whole "look in the mirror with horror" scene, then goes bonkers and does the Joker's patented "YMCA dance while surfing" maneuver. Gotta love Gotham.

BFB is Prof. Radium's first appearance since his original one in 1941. I love stuff like that. If you don't, well, then you're missing a big chunk of the fun of DC.

His real name is Henry Ross, and his hobby was inventing radium-based serums that can bring the dead back to life. If only Gotham had had Heroclix; think how much needless waste of life could have been avoided if wackos like Henry spent their evenings trying to understand how to apply the Pummel Feat Card to figures with CCE instead of performing ill-advised scientific experiments.

Anyway, Henry figured out how to bring dogs back from the dead. 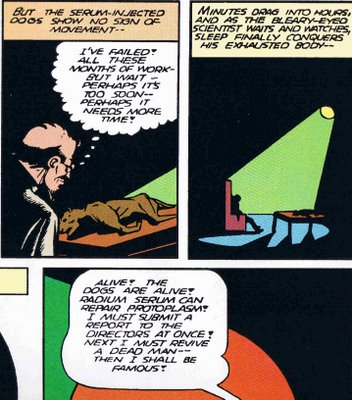 Look at those first two panels; that's art, people.
Golden Age artists may not have been as technically adept as modern ones, but they had a compensatory sense of style and composition that was nearly overwhelming. Are there any panels in any of the comics you bought this week that will impress or even haunt you like that second panel above? I don't think so.

You go, Henry. As a dog lover, I salute you, and note that here on Earth Prime we are just beginning to figure how to do what Henry did over 60 years ago. Now, go re-read the first pic in this post, the one from BFB; clearly, Henry lost a dog or two tragically as a child and that left a lasting impression. Dude loves dogs, and his first thought for any science or technology is, "How can this ease the lives of dog-owners?" Henry's A-okay in my book.

Sadly, his bosses don't believe in Henry's reanimated zombie dogs because he performed his experiments in the dead of night when no one was watching and might have substituted lookalike live dogs for the dead ones. In fact, they fire him for stealing thousands of dollars worth of radium for his unauthorized experiments. Fools! The utter fools!

Naturally, Henry's next step was:

(A) Repeat the experiment with credentialed witnesses.
(B) Publish a paper on his research and call for external verification.
(C) Prove that the zombie dogs were the original ones through DNA comparison.
(D) Post an mpeg of his reanimation experiment on YouTube.

Since this is the DCU, the answer is obviously (E): 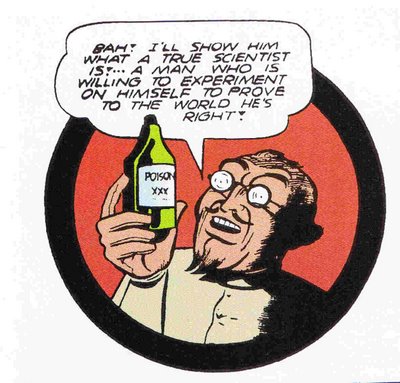 Later, Henry blames the radium for driving him crazy.
Personally, I'd say that began when he thought it was a good idea to drink a bottle of something green, labelled "poison" with three Xs on it. Where was Mr. Yuk when Henry needed him?

See, this is why I never became a full-fledged scientist; I just don't have the right mindset. That idea would never have occurred to me.

Which may, in fact, be fortunate for me, since soon after Henry reanimates, he begins to glow with radiation and accidently irradiates to death the very colleague who brought him back to life. Oops; one less card to send at Christmastime, though.

But Henry "Professor Radium" Ross is equal to the emergency and develops a wonder cure for himself based on the non-existent chemical Volitell, which you can tell from its very name is an expensive drug found only at hospitals that Henry is going to have to start stealing to control his condition.

But first, a quick stop off to kill his girlfriend!

Stories used to be so much more gosh-darned efficient .
We've not seen this women before, the only way we know she's his girlfriend is through context, and she is not mentioned again. Yet she exactly serves her literary purpose of heightening the villain's personal Greek tragedy. I think modern writers are afraid that if they write scenes this efficiently, readers will have heart attacks because the plot's advancing too quickly.

You know, every time I hear someone whining about the "women in refrigerators" thing or the Rolling Head of Pantha "problem" with modern "bloodthirsty" writers, I feel like sending them every Golden Age panel where people die unceremoniously in the most horrible ways with barely a second mention. Because in a Golden Age story, there's an average of one per page. Men, women, dogs, children; I tell you, they used to drop like flies.

Fortunately, the Golden Age Batman gets one of his ridiculous hunches, something he does, oh, about once a story. These hunches are invariably correct; the GA Batman was a precog on a level with Agatha in Minority Report. If Batman says, "I have a hunch, Robin, that tonight an embittered ex-Nazi scientist may release a plague of robotic cicadas that will devastate the South American cocoa crops," then you dang well better stock up on Hersey bars, pronto, buster. No wonder Bruce Wayne does so well in the stock market.

Read enough stories and you'll notice that inspiration often comes to Bruce when he's undressing in front of his youthful ward. Who can fathom the mysteries of precognition? By the way, rumor has it the descendants of Batman are the first colonists on Naltor; it's all a plot by Evil Skeets, I'm told.

Sure enough, Batman's hunch is correct and out pops Henry in a startlingly unattractive containment suit. Henry, cornered by B&R, does what anyone with the deadly power of radioactivity literally at his fingertips would do: 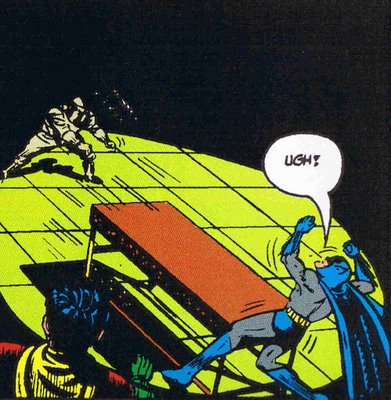 Ouch. So much for the "descendants of Batman" theory.

...shoves a table into Batman's crotch..

Surprisingly lithe in his bulky containment suit, Henry shimmies down the drainpipe, which he destroys with his radioactivitiosity to prevent the Caped Clods from following. Remember, this is not the modern Batman, who's 102 rippling rockhard points of Leap/Climbing, Outwittish Willpower; this is the Golden Age Batman, who's more like the 47 point Icons starter set Batman, and faints if you throw the Gumball Machine token at him.

At this point, Batman does some fancy lab work to figure out that Prof. Radium is, in fact... Henry Ross! Thank gods Gotham City keeps on file the fingerprints of all civil service workers; no really, that's what Commissioner Gordon says. Yikes.

CSI: Gotham City. You see, Batman used to be a detective. Crazy idea, huh?
Poor Robin always used to nod off during these parts and had to hold his head up to stay awake.

Why didn't Batman or the police just read the article in the paper that said, "Wild-Eyed Civil Servant Fired for Stealing Massive Amounts of Radium"? Probably because it got bumped by one of Batman's silly "Trap Notices", I'll wager.

You see, Batman & Robin naturally did what they ALWAYS do: put a fake notice in the newpapers to lure the villain into a trap. In the Golden Age, the Gotham papers would reserve at least two or three columns per issue, just for Batman's little fake stories. I can just hear the Editor going over them: "Jeez, this one's got Mrs. Van Landorpf planning to wear her emeralds with tweed, ferchrissake; yeah, like the Penguin's gonna fall for that. I think he's letting Robin write these things!"

Just as naturally, Henry falls for it. They always fall for it. Except for the Penguin, who's too smart for that crap.

Anyway, Batman & Robin, now wearing insulating rubberized versions of their costumes for protection, face off against Prof. Radium at the shipyards because it (A) looks dramatic (B) provides plenty of props to fight with (C) offers lots of opportunity to fall. Which is, of course, exactly what Henry does, right into the (C), which further proves that he's a Joker fan, 'cuz that's just what the Joker'd do.

What happened to Henry must have happened to the dog he reanimated. So where's Rusty the Radiumhound? And why... 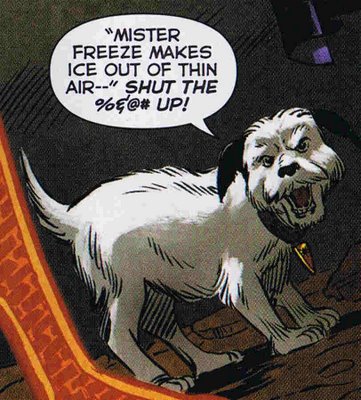 is he not kicking this "dog" 's little canoid kiester?!
Posted by Scipio at 7:01 PM

Okay, my next superhero RPG character is now going to be Radium Hound.

Ideally, this will be in a DCU game.

(Verification word: hmrpytu, which is a noise I make all too frequently during allergy season.)

I can attest to the Golden Age murder sprees to serve plot purposes. I have been recently buying a lot of DC's 100 page giants from 1973 and they have a lot of Golden Age reprints in them and the amount of unmourned deaths is something I was amazed by.

At least Dr. Radium's girlfriend got one panel alive before her demise; sometimes these characters are introduced already dead with their legs and arms askew in a rictus pose similar to the dead cockroach.

It reminds me of the red-shirted security guys in the original Star Trek. James T. Kirk just wouldn't take you seriously until you offed a disposable member of his away team in a horrible manner akin to the Golden Age Spectre.

That Doc Radium/ Geiger conversation was the exact point I stopped being indifferent towards BfB and learned to love it.

Dammit, Scipio. Now I'm this close to picking up "Battle for Bludhaven," and like Chinatown and the 'Nam, that's just somewhere I never thought I'd have to go back to again.

Scip, did you just make up the word "canoid?" Because if you did, that makes you even more awesome than I thought was humanly possible. (And your whole post already took you to as-yet-unscaled heights of awesomeness.)

The whole scientists-experimenting-on-themselves bit is closer to the truth than you might think. JBS Haldane and his dad used to experiment on each other and any one else who happened to visit, including memorably on one occasion the Spanish Ambassador to Britain. These expeiments included toxic gases, asphyxiation and investigating "the bends"- they didn't kid around. In fact there could be an argument based on the Haldane approach that scientists involved in animal testing are simply wimps.
As for Doc Radium...deploy the Bathound!

I'm a Classicist, BB; we don't really make up words, we just uncover ones that no one has yet used.

You're definitely on to something with this GA murder thing. Even Killer Moth killed two guys in one panel in his first appearance (hence the name Killer).

Even with the reboots and restarts and "turning of the back to the Golden and Silver" that we see at DC, it makes me happy when we get something like this.

DC has some great villains hidden back in the cobwebs back there.

I'm still holding out for the return of Funnyface to...well...face off with Superman. I mean, c'mon, a villain who can bring newsprint characters to life. How sweet is that?

The panel where the not-so-good doctor screams the radium is driving him mad is actually pretty creepy ...

Bless you Scip for digging up gold like this.

Any particular reason you listed dogs before children when it came to those who got dropped in the Golden Age? Did more dogs die than kids? Or do you simply value dogs more than kids?

Thank you very much for this post Scipio. You're like a rogue DC Historian. See, I'm now too lazy to look up characters I don't know (compared to a year ago) because I know sooner or later I'll get the straight dope here, er, straight radium poison in this case.

I need to learn the crotch-table shot now.

I AM SO THERE!

The problem, Bill, is that it takes 17 years to recharge them.

Who is this professor radium is he a super villian

Yes, Donald; he is a supervillain.