Things That Made Me Happy This Week

Devem
There are two kinds of people reading 52 this week; those who know that the appearance of someone named "Devem" equals Big Trouble, and those who don't. Rao help the latter.

Five Fists of Science
It didn't quite live up to my expectations. But any book that used Edison, Marconi, and Morgan as the villains they were, gets a thumbs up from me. Besides, I thought I'd never live to read a comic where Nikola Tesla says things like, "Quickly -- to New Jersey!"

Damage
Adorable little hunk Damage is going to be in the JSA, something I've been requesting for a long time. I like his new costume, although not even homage to his father is sufficient reason for covering that face!

Action
Wow, Kurt Busiek and Geoff Johns have the guts to write a Superman who's not an imbecile! Bully for them; I'm tired of writer following in Miller's footsteps by making Superman strong but stupid. Oh, and note to Marvel-readers; read Superman's thoughts in this issue. THAT is a hero, not self-pitying photographers and clawed killing machines.

X-Men 3
I really enjoyed it, clawed killing machines and all. Apparently, if you don't like Marvel comics, their movies are great, but if you do like Marvel comics then you have to hate the movies. Just another Marvel thing I don't understand, I guess. I thought it was great. And for those who didn't like the final final ending; have you ever actually read a comic book?!

Dev-On (which is, by the way, how it's really pronounced)
If you enjoyed "Widow-Maker Week", thank Devon, not me. He's the one who loaned it to me from his collection, saying, "I think you might be able to use this." He's also the one who shared a supersecret with me that's making me very anxious for the return of certain titles. Now, if only he'd give babelicious Jim Lee my phone number...

Whaddaya know, fans spoke and DC listened. Bully for all involved. Manhunter is temporarily uncancelled; you have until issue 30 (instead of 25) to convince others to subscribe to it. DC's giving the fans of this title the opportunity to save it, so let's get to work. What's that, Todd? You want me to spread the gospel of Manhunter? Yes, Todd; yes, I will spread the gospel of Manhunter.

The Unlongated Man
In the past, Ralph Dibny spent so much of his time wildly contorted that I never realized he was built. Good to see that contemplating suicide hasn't kept him from hitting the gym to chisel that sixpack.

The Tattooed Man
Maybe John Henry Irons has always had that tattoo, but I've never seen it before. Ordinarily I really dislike tattoos, particularly on black guys, but John's tat rocks. As far as I'm concerned, there are only six socially acceptable tattoos: the S, the Bat, the Double W, the Ring, the Bolt, and the Aqua A. Guess which one John has.

Deadman
The Spectre ain't just a pretty face. Not only did he condemn someone this week to one his patented Hideously Befitting Deaths By Transgmogrification Or Substitiary Locomotion in record time, he put Crispus Allen in his place while doing so. Oh, snap! 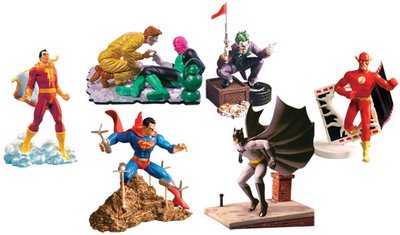 Those little do-it-yourself statue kits from DC are too darling! I bought one immediately. How could I go wrong, if I'd be happy with the Captain Marvel, the Superman, the Batman, the Flash, or the Joker? You guessed: I got Hal Jordan. I feel like Charlie Brown at Halloween.

I'm praying that, with the new cartoon coming out, they make them for the Legion of Superheroes. Then I can buy each one, set them up by an open widow, and sit there waiting for lightning to strike them ... . Then you'll ALL be sorry after I turn myself into the Composite Rolling Head of Pantha and begin taking my revenge. 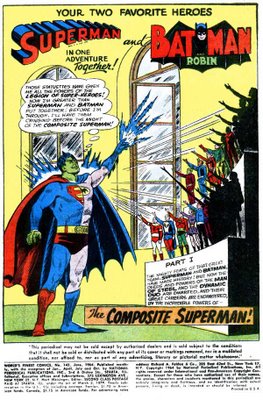 Dev-Em made me smile too. Then I thought, "Am I missing something? Did they reintroduce him in that Kandor story that I never read?"

But hey, he's not always trouble. Sometimes he's only pretending to be trouble.... :-)

That one page of Superman floating above Metropolis, considering himself an outsider yet refusing to give in to despair, that's the Man of Steel I grew up with.

I bought four of the Who's Who figures, and also got a Hal Jordan, which I promptly gave away to someone else.

Now, if they'd made one with him and the Heavy Yellow Lamp, that would have been a keeper.

You know, I'm pretty sure that's why my Dad has his Legion action figures all displayed together...

I want a good Spectre series, but they completely ignored the Infinite Crisis #4 origin of this host. Ranted about here: http://them.ws/post/1931/review_infinite_crisis_aftermath_the_spectre

The statues are a little weird, wouldn't you say? I mean, five of them are suitably iconic:

--Captain Marvel in a cloud, as befits the whole lightning motif.
--Green Lantern getting his ring from a space odalisque.
--The Flash imitating the cover of his first appearence.
--Batman doing his golden age batcape schtick.
--The Joker taking a dump on a crate.

All well and good.

But what the heck is Superman doing? It looks like he's fighting the Evil Television Aerials of Cowflop Mountain.

I love Marvel Comics and I loved X3. But--and here's the difference--I don't care if the movie takes some liberties with the original source.

Angel not a founding member? Sure, doesn't matter. Juggernaut a mutant? Who cares? The change makes sense within the context of the movie and moves thing along faster. Madrox as a bad guy? Heck, that was fun. Movies don't have to and shouldn't strictly follow the page. As long as the basic themes and storylines are not compromised (and I realize some people thing that), moviemaking is a different medium, and what works on the page may not always work on the screen, no matter how "sacred" the text is. The flight from Hobbiton of Frodo and Company in the movie version of The Fellowship of the Rings is compressed, frantic, hounded and never without danger lurking back beyond you. Adding in Tom Bombadil or Crickhollow to the movie would have totally lost that momentum.

Kudos on your excellent two-time use of the good meaning of the word "bully" in this post, by the way.

And bully for kudos, as well.

Ralph isn't really chisled; he distorts his body to look as if he has a six-pack. Hey, even a grieving widower's got to pull a little tail, right?

Wait, why is Hal Jordan giving Abin Sur a manicure? "Emerald Dawn? You're soaking in it!"

Manhunter may be the greatest Marvel-style comic currently published. It's nice to see you branching out, Scip!

Didn't John Henry Irons get his tattoo from Shaq? Or am I imagining that?

X3 was awesome. The changes worked well within the context of the film itself, and that's all I ask. I don't understand the people who require slavish devotion to the source material in these sorts of things. This isn't Tolstoy, it's freakin' X-Men.

The Who's Who boxes are a fun idea, but the only one I want is Captain Marvel, so I don't want to go into it at random. Maybe I should check eBay.

Before anything, anyone who says comic book movies shouldn't stay too close to their comic origins, cannot now or ever complain about Daredevil, Catwoman, Elektra, or any "Sing-anges" made to Superman's costume. We want to see the comics on screen, not some guy's interpretation of the comics on screen. Cyclops and Jean are the true love, Wolverine can't keep that school together, and Rogue is worthless if she doesn't have the strength to bare her mutantcy and hope that she can one day gain control, instead of taking the quick fix from the oppressors. Ugh.

Anyway, the thing I actually wanted to know is, does anyone know where a pic of Damage's new costume is? Or any pics related to the JSofA relaunch? I wanted Damage to be relevant for some time know, and I hope this placement works. Being in the JSociety just seems right for Damage, and I'm kind of hoping Atom Smasher will go back to his "brother", Teth (don't know who that is, you shouldn't be reading this blog).
And Tolkienites would be pissed and rightly so, if Frodo and Sam went on an orc-kill spree and Gandalf threw Saruman bodily off his balcony.

Re: Damage
Adorable little hunk Damage is going to be in the JSA, something I've been requesting for a long time. I like his new costume, although not even homage to his father is sufficient reason for covering that face!

I have the horrible suspicion that the reason for covering his face completely is that he's so hideously scarred from his ordeal that he can't show it. There's a blurb in one of the JSA issues around the time of IC 2 or 3 that says 'the regeneration attempt failed' on Damage.

I hope like hell I'm wrong but given how things have gone lately, I'm willing to bet money on this.

I really liked X-Men 3, and I'm a long-time X-Men fan. My wife only knows the movie versions, and she really liked it, too.

The movie brought resolution to the X-Men story. Wolverine "grows up" from his psycho loner phase. Rogue makes a choice we may not agree with, but it's totally logical for the character. The mutants end up a bit more assimilated, as per Xavier's dream. Various characters end up dead or out of the picture. If there are no more X-Men movies, I'd say they went out on a high note.

Finally saw X-Men 3. Meh. And that's not because I'm a Marvel Fanboy, because I'm very, very not. Don't care about slavish devotion to the comics, don't care that Kitty Pryde shouldn't blahdeebleedeebloo, or that Juggernaught's costume didn't whatsisfribble.

Just want a story. Got that. But only just.

Look, I get that comic book movies don't traffic in nuance, but this one felt like they just filmed the outline. Like they broke the story, divided it up into scenes, wrote each scene's gist on a 3 X 5 card, and handed it to the director. "Here, film this."

Just sat there, for me. And I could never suspend disbelief enough to imagine anything other than Sideshow Bob had skinned some hapless Muppet and had to taken to wearing its pelt so he could gain its power.