Atom-Smasher is leading in the Heroclix Giants poll?

Interrobangs cannot suffice to express my combined confusion and outrage.

My set arrived the other day, and they're purdier 'n a ploughed field on a Sunday!

Lovely Rita, in her kicky lilac go-gos and ginchy gloves, with her patented Elasti-Girl pose that says, "Admire my biceps all you want, but look up my mini and I'll squash you like a bug."
Chemo is noxiously sexy, and (despite his opaque appearance below) is all clear green plastic, except for his beady red eyes. When I played him against Devon's JSA team, and I had him repeatedly spit toxic waste into Atom-Smasher's face. I didn't win, but I didn't care, either. 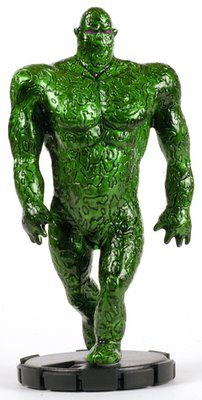 "Oop. Glurb."
I was also able to reproduce the hair-pulling battle between Rita Farr and Giganta in IC#7. Who says gay people don't love a good catfight? Mee - oooW! 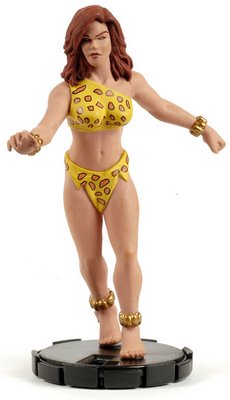 "And bigger than Giganta! Everbody tries, but can't-a..."
So, anyway, the HCRealms people are having a poll to see which of the Giant figures people like the most. And... and.. that murderer is winning.

That's obscene: it's VALIDUS who should be winning. He's got a see-through brainplate, shoulderhoses (even though you can't see that on the linked photo), and a range of 8.

Okay. I'm ... just going to pretend that on "New Earth", that whole dictator-squishing thing never happened, I guess...
Posted by Scipio at 8:13 AM

I wonder if JLU appearances have something to do with the rankings? Atom Smasher did figure prominently in a few episodes . . . not as many as Giganta, but then she's a Bad Guy. Validus only showed up the once, and Rita didn't show up at all on JLU (although she did appear on Titans...)

Don't know about the Heroclix, but Validus has one the best character designs in comics up there with Ed Hannigan's Brainiac.

Her end-dial is particularly clever (as is she).


And, yeah, you can say Validus makes no sense (with no eyes, sloth hand, and see-through head) ...

but he's a FANTASTIC looking monster!

Of course Atom-Smasher should be winning! Have you seen what he can do?

Well, I'd vote for Colossal Boy. He's just about the only one of any use for customizing. OK, I could turn Giganta into Allison Hayes from Attack of the 50-Foot Woman; but Colossal Boy could become the Clint Barton Goliath, Duplicate Boy (duplicating Colossal Boy's powers, natch), several of Colossal Boy's earlier costumes, and even Giant Turtle Boy Olsen!

So how tall are these guys relative to the regular hero clickies? Personally I'd go for Rita because that retro styling is so damn cool. And I don't even play the game.

The only clix I own are the free comic book day ones, and the only one I aspired to own was the big Phoenix one because it was so damn cool.

On a shallow note, Giganta sure is hot, but Rita doesn't look like any supermodel I've ever seen.

Check out some of Damon's dialogue in this week's Manhunter. Good stuff, but the line about "you both kill bad guys" means Al is still the guilty squisher.

And as far as playability, I'm all about Colossal Boy right now, but Validus is a great figure.

They are about three times the size of regular figures.

Nicely, the giant figures themselves vary in height; as they should!

Puny Atom-Smasher is the shortest one.

I don't even play HeroClix (because God knows I don't need yet *another* money and time sink) but if the Giants set included Giant Turtle Boy Olsen I would buy it sight unseen. In fact...maybe that's another good use for one of those WallyWorld clearance Things...hmmm...two foot tall Turtle Boy...hmmm.